AutoPainter HD is a photography app for the iPad. It uses the pictures you have on your iPad or that you take with your iPad 2 and transforms them into what looks like paintings. It is a fun app that can save those pictures you hoped would be beautiful, but didn’t turn out because of the low-quality camera on the iPad 2. It also works with any photo you download or import to the iPad, so you don’t even have to have an iPad 2 to make it work. We are making it our iPad App of the Week. 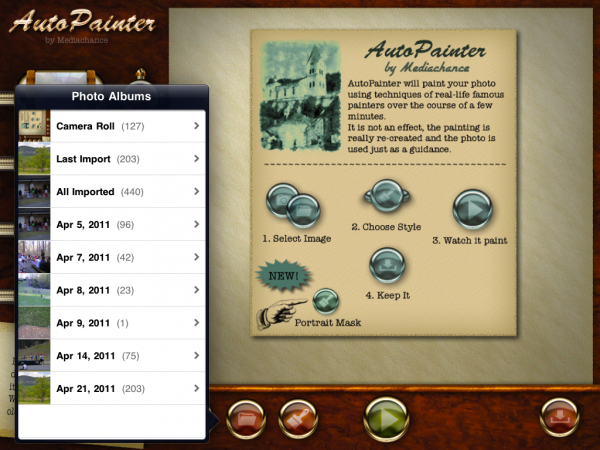 The app has a simple interface that is intuitive. The app developer is very responsive, adding a couple of features that the original release didn’t have after we requested them. The first screen you see is the help screen and it is useful to get acclimated.

Start by taking a photo or by tapping the camera icon, one of the three icons along the bottom of the app. If you want to work on a photo you already have on the iPad, hit the folder icon and it opens the camera roll, as you see above. Select the picture or take a picture and you can get to work. 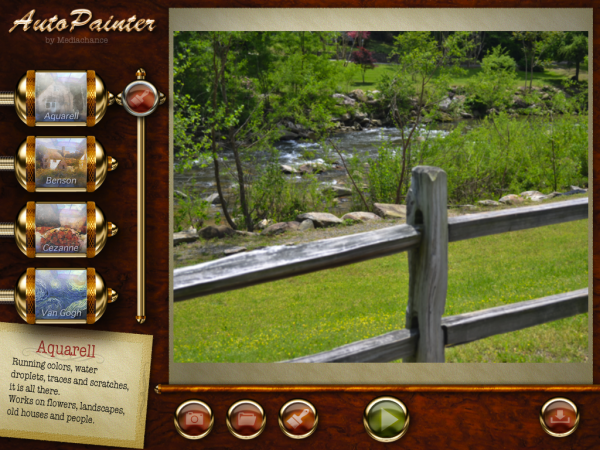 On the left there are four icons. Each represents a filter you can use to transform the photo into what looks like a painting. The small help card in the lower left corner tells what each filter does. Tap each icon and read what the corresponding filter is used for, including what kinds of pictures it works best with. For example, the above filter says that it “Works on flowers, landscapes, old houses and people.” 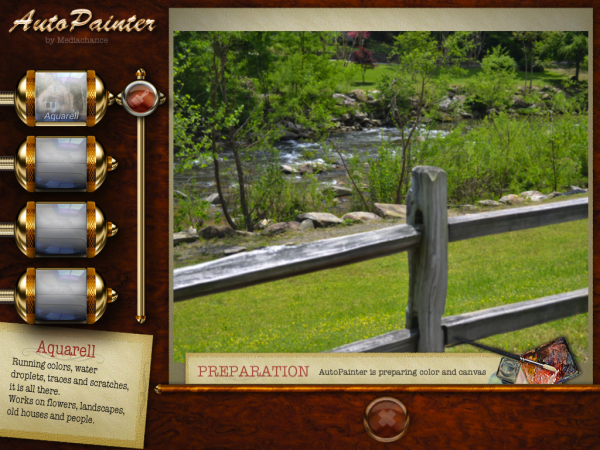 Step one prepares the canvas

The app uses three steps to transform the photo. First, it prepares the canvas with splotches of paint. Then, it starts to add detail in a second pass. On the third pass it fine tunes the image. See the picture above and the two below to show how it transforms this picture, which I took with another camera at Lake Lure near our home in North Carolina. 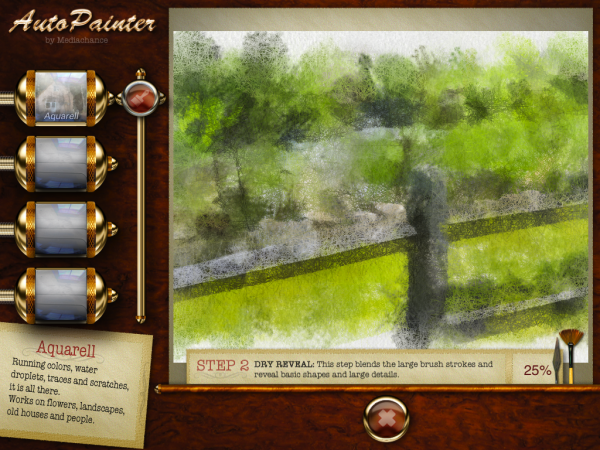 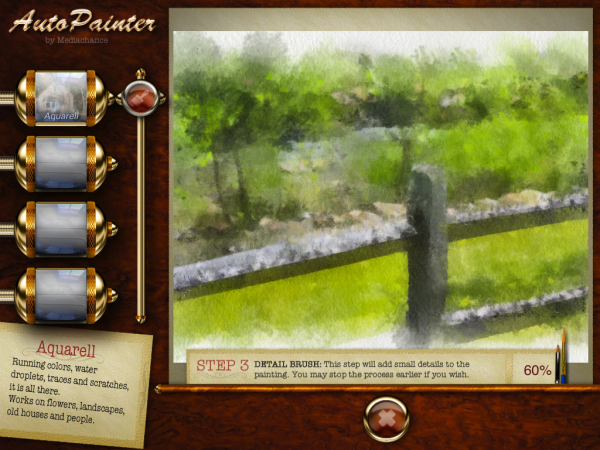 Step three is the finer detail. Stop it by hitting the X as soon as you like the results.

On the last step, as soon as you think the image looks good, stop the process or just let it finish. Each step shows the progress with the percent next to the description.

Below are the before and after shots showing how this app transformed my simple photograph. 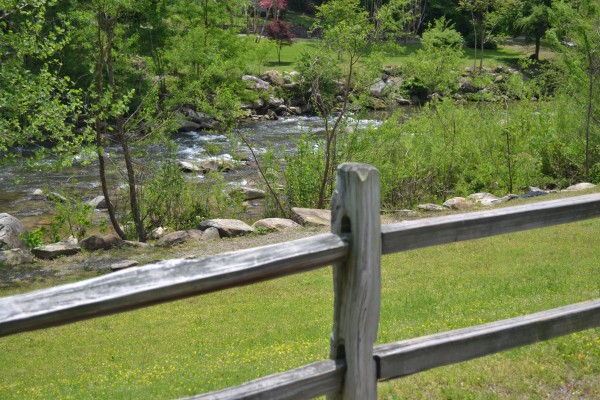 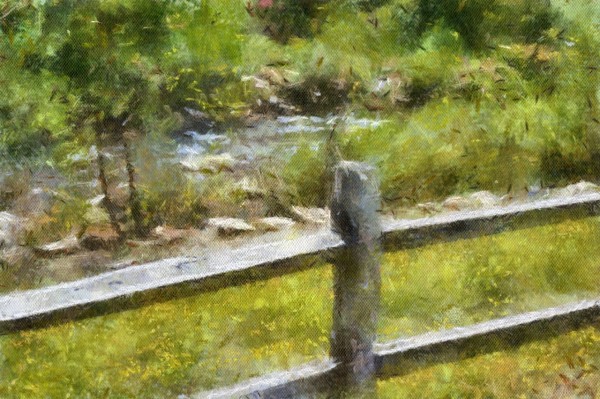 The four effects can do some interesting things with your photos. Here are a few examples. 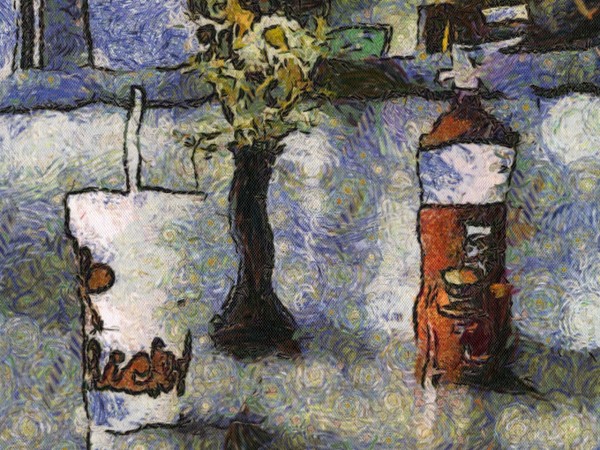 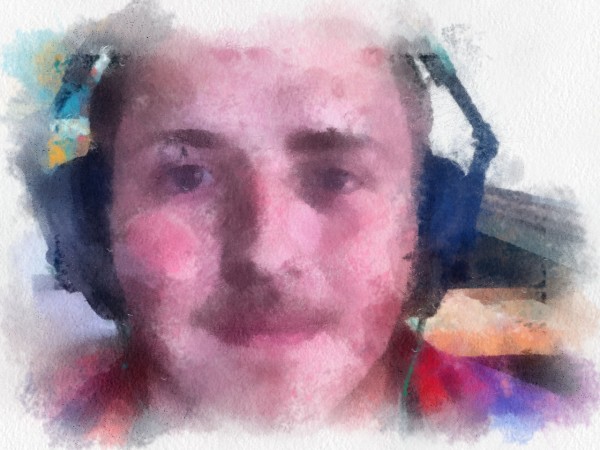 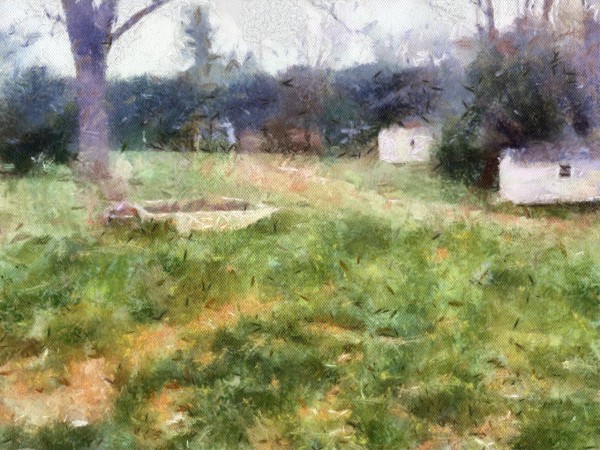 I really like what the app can do for your otherwise boring or even bad photos. Some of the above pictures were taken with a Nikon D3100 and others with the lowly iPad 2 camera. Because the iPad 2 camera is not as good as it could be, this app will potentially transform an ordinary snapshot into something interesting. The four filters are useful and we hope they will add more in the future. 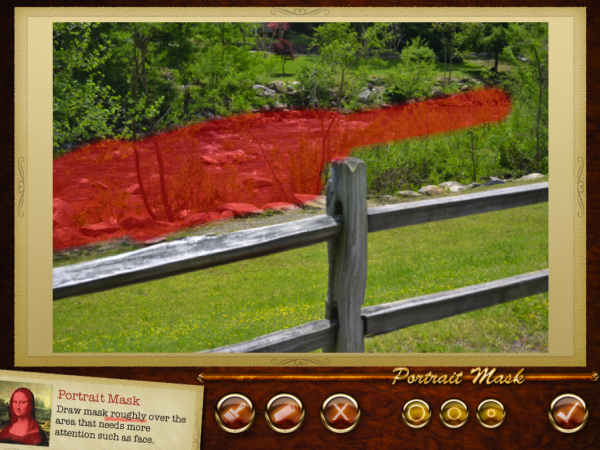 After a recent update the app now shows the before and after. Just hit the paintbrush icon and it shows the before screen. The paint brush icon is actually designed to give you more detail. Before you apply the filter you can hit the paint brush icon and paint over the parts of the image that you want to have greater detail. Above I painted over the stream with the rocks and the results were a slightly better image.

Once you are finished transforming your photo, then hit the save button at the right side of the bottom toolbar.

Below is our video review and demo of AutoPainter HD:

We like AutoPainter HD a lot. It is fun to play with and useful for rescuing bad pictures. Our family enjoyed taking portraits and seeing how good or bad we can make one another look using AutoPainter HD. The app makes interesting images from both good photos or even boring photos. At just $1.99 it is a bargain. We hope that a future release might include more filters and the ability to post your resulting photos to Twitter, Facebook, Flickr or a Mobile Me account.