For the most part notebooks have the same form. They are rectangular with a flat bottom and a flat top; sure they taper a bit here and there but they are decidedly flat. That’s something that Arc Computer is looking to change with the curved notebook concept they recently showed off. 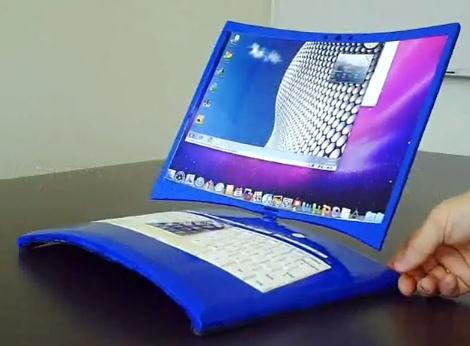 The curved notebook concept takes the entire notebook and adds a curve, much like if you heated up your notebook and bent it on the edge of your desk. The curved body makes use of a curved OLED display that is  supposedly easier on your eyes and provides an IMAX-like screen experience.

The keyboard might attract ergonomic addicted typers who will likely be familiar with the curved split keyboard style that is found on most Microsoft Comfort Curve keyboards. In the middle of the split keyboard rests a multi-touch trackpad.

Currently the Curved notebook, called Nalu, is only a concept and the demo shown below is a non functioning unit.

Via Liliputing and NetbookNews