Dragon Dictate for Mac Good for Simple Dictation Only 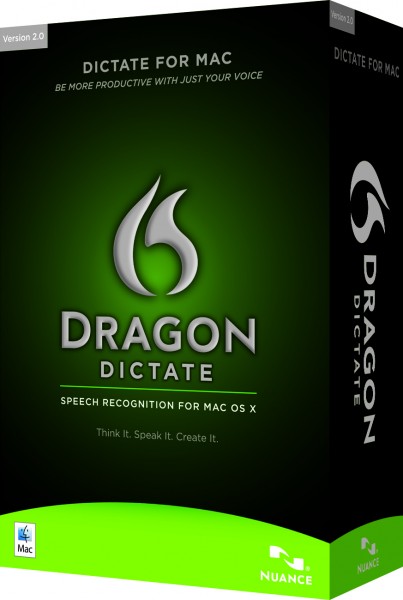 Dragon Dictate 2.0 for Mac from Nuance is a speech recognition program that allows the user to enter text using a microphone instead of a keyboard. I first attempted to use Dragon Naturally Speaking for Windows more than a decade ago. At that time the speech recognition engine was about 85-90% accurate to my best recollection. When I recently had a thumb injury that made typing painful, I took the opportunity to give the $179.99 Mac version of this program a try. While the program is much better than it was ten years ago, it still has a steep learning curve for the user who plans to not only talk to type but also control the computer 100% with the application.

The Mac version of Nuance’s speech recognition program was formerly called MacSpeech. Our own Xavier Lanier gave the old version a whirl a year and half ago. He also previously highlighted the iOS version which is only voice recognition and offers no device control.

This new version updated the recognition engine and added simpler commands. It will also read text to the user with text-to-speech capability. The proofreading tool helps the user find their mistakes. 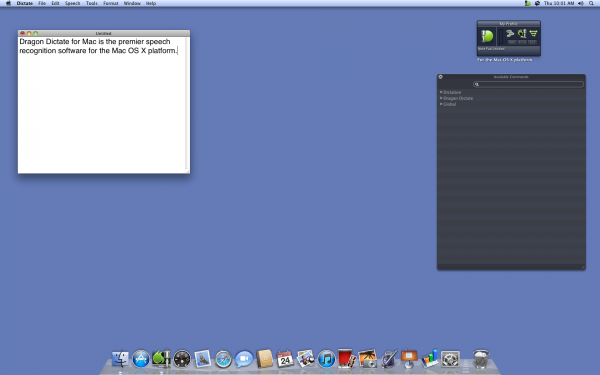 Speech Recognition: You Talk, It Types

Our primary need was speech recognition. We found that, if you talk somewhat deliberately and clearly, that Dragon Dictate 2.0 works well for simple dictation. It took some time to get used to the way it works, but after a few sessions using it for all typing needs, we got the hang of it. Pretty soon we were working at a decent pace.

One thing the user must remember to do is add punctuation. To get the following result …

Notice having to say the word “numeral” before the numbers 2 and 0 and having to say the punctuation between 2 and 0 and at the end of the line. For capitalization you will have to say “Capital Z”. For example, if you plan to include a proper noun in the middle of a sentence, instead of just saying …

I went to the Milwaukee Zoo yesterday.

I went to the Milwaukee Zoo capitalize that yesterday period

Saying what you are want to type and having it show up sometimes a second or more after you say it is odd. Compared to the instant response of pressing a key and seeing that character show up on the screen, Dragon feels slow when working right.

After a period of usage, Dragon Dictate 2.0 slows way down. For about five average paragraphs it responds within a second or two of your speaking. It then slows to the point where sometimes you say a phrase and have to wait ten seconds for it to show up on the screen.  We are not sure why this is. There could be a memory leak in the program. Our only solution was to shut down the program and restart it. We reached out to Nuance to find out if they had a solution, but they did not respond. However, we did find that in a previous release there was an issue with using Dragon Dictate with Microsoft Word. Our slow down did happen while using it with Word. But the support site claims it would only happen with an older version. Version 2.0.3 should not have this problem, but it did in out tests.

Finally, there is the pride issue. It feels weird using the program when others are around. If you are at all self-conscious, you will have to get over it or find an isolated place to use the program.

System Control: Do What I Tell You To Do

With Dragon Dictate the user is supposed to be able to control menus, click buttons, and do other system activities. For example, if you say “Search Google for notebooks” it should open the default browser to the Google home page and perform a search for the word “notebooks”. We had very spotty results with all of these voice commands. First, you have to tell the program to enter voice command mode by saying “Command Mode”. Sometimes, instead of switching from dictation mode, it actually typed the words “command mode”. There is also a spelling mode for things like spelling strange or unrecognized names. It often just types the words “spelling mode” instead of entering that mode. 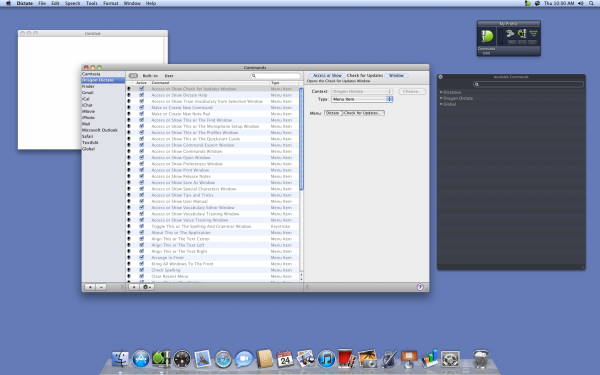 Setup: Read this for Me Please

Since the computer is not smart enough to listen and understand or fill in when it mis-hears certain words spoken, we have to help it by training it to hear our voice and understand our speech styles. Before you can even use Dragon Dictate, you will have to calibrate the system by reading some text while it learns your speaking style and pronunciation.

Dragon saves your profile and loads it each time it runs. Accidentally load another person’s profile and you will see accuracy degrade. Also, the profile is tied to your hardware. I used a Microsoft LifeChat LX-3000 USB headset/mic on my MacBook Air. When I had to use the built-in mic on my MacBook Air because I forgot the Mic at home, it could barely understand anything I said. I had to retrain it to get it to work properly using the built-in mic. That meant another 15 minutes of mindless reading.

Value: Is it Worth the Money

This reads like a bad review, but I actually think Dragon Dictate is a good value under the right circumstances. For those who do not have the use of their hands, for whatever reason, Dragon Dictate can help that person use the Mac for dictating. With a lot of practice and training the user might be able to get the program to recognize voice commands so to control the OS. Dragon has to come out with an update to correct the degradation of speed over time or explain how to fix this if it is a user error.

Because I have the use of my hands, I often just gave up and started mousing the normal way for system control. Occasionally I was forced to revert to the slow hunt-and-peck mode of typing to get the right words entered.

And yet, for the ten days I didn’t have the use of my thumb, I got a lot more done than I would have otherwise. The Monday after I hurt my thumb on a Sunday night, I sent my editor a message saying, don’t count on me for much writing this week. It was the week of the Apple iPad 2 release and so the work load was heavier than normal for a tech blog. Dragon made it possible for me to contribute during this busy time. In cases like this the cost is worth it to get even a little more productivity. Long term injury or disability would make Dragon Dictate a valuable tool.

For fast typists, Dragon will frustrate. Since my thumb has healed enough for me to type, I have not used the program much. If you are not a fast typist, Dragon will likely speed up your text entry. If you really want to be able to have Star Trek style voice control over the computer, work through the early frustrations and learn how to use it without reverting to the mouse/touchpad.

The thing that keeps me from recommending Dragon Dictate is the sluggishness of the application after about 20-30 minutes of use. It might be a good idea to take a break every half hour, but I’d rather decide that myself rather than be forced to do so by a poorly performing app. Let’s hope Nuance fixes this problem soon.

Another frustration is that Nuance almost doesn’t seem realize it has a Mac version of the software. A lot of the help links and tutorial videos are not for Dragon Dictate but rather for the Windows Dragon Naturally Speaking. This is frustrating, but something that is not uncommon for Mac software users.

If, after knowing its limitations and weaknesses, you plan to buy Dragon Dictate, then opt for the digital download version and pick up your own headset. A boxed version from Nuance will cost $199.99 with a cheap headset. The downloaded version is $20 less. You may save money getting the bundle, but you will still have the cheap headset.

You can get a real bargain at [amazon_link id=”B003YUJBXK” target=”_blank” container=”” container_class=”” ]Amazon for just about $133[/amazon_link]. Supply your own mic and headset and you will be ready to dictate.