Not long after finally releasing the stable version of Google Chrome 10, the search company issued the first public beta of their version 11 browser. It takes better advantage of HTML 5, the new standard that should make web sites more feature rich. One such addition is the ability for web developers to add speech recognition to their sites. The Chrome 11 also has a new icon, which removes the attractive glossy look for a more flat appearance

The HTML 5 speech input API is not intended for end users but developers. However, as web designers implement them, you will enjoy see the advantages. You can test it out at a special page set up by Google for that purpose. All it does is let the user click the little microphone icon, say something into the computer’s microphone and the audio is sent to the Google servers to convert it into text and it is entered automatically it into a box, just like on your Android phone. 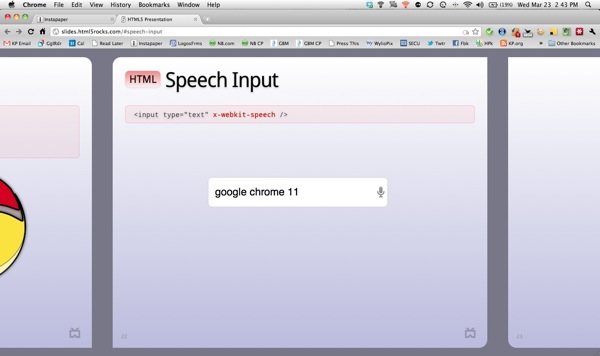 Click on the mic icon and talk. It enters text for you.

We can see this being useful for those with the physical inability to type, for mobile search purposes where keyboards are often inconvenient, or just for faster input by those who are not good with touch typing.

In addition to speech input, the new browser handles visuals better with a 3D GPU accelerated CSS. That means the user will be able to see more dynamic content in a 3D environment. Think of your video games and not wearing glasses at the movies when you think of this kind of 3D. To see it in action go to the WebKit website and mouse over the graphic with the numbers on it in the middle of the page. It flips around to show the effect. 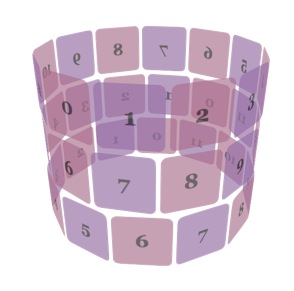 Mouse over the object and it flips in 3D

Download Squad adds that there are some goodies just for Mac users, including Tab Overview and use of the Mac’s Accelerometer. The Tab Overview is a feature that offers a visual display of all of your open tabs by swiping down on the trackpad with three fingers. This has to be enabled by typing the following: “about:flags” and checking the first item on the page.

Tab Overview in Chrome 11 works like Expose' on Macs only

There is little detail about the accelerometer feature. It uses the accelerometer built into new MacBook Pros, which can sense movement of the computer. A web developer could possibly include this in a page for games or navigation. Imagine being able to reload the page by tapping on the side of the monitor or entering into full screen mode every time the notebooks is picked up and put back down. What if a page had a labyrinth on it and you could move the computer to move the little silver ball? You can imagine other uses.

There have been a slew of new browsers released including Microsoft Internet Explorer 9, Firefox 4 and the 10th version of Chrome. The browser wars of the mid to late nineties are back benefiting the user as competition breads new features.