How to Use a Backup to Set Up a New iPad 2, iPad, iPhone or iPod Touch

If you’ve just purchased a new iOS device like the iPad 2, then you will want to get started right. If you’ve already had a similar Apple product and are just upgrading there is no reason to start over from scratch. Instead, just restore the backup of a previous one. For example, if you purchased the iPad 2 after it came out on March 11, 2011 but had a backup from a previous iPad first gen model, then instead of reinstalling all your apps from iTunes, restore it from a backup.

Plug in your new iPad 2 too get started 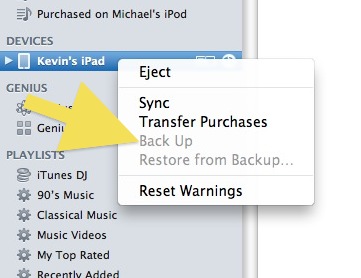 The first step, unfortunately, is make sure you have a good backup of your previous device. It is hard to not plug in the new one and get going as soon as you get home. But you will thanks us. Plug in the old iPad or iPhone/iPod Touch and let it sync. If you don’t see it saying in iTunes that it is backing up, then manually do so. Find the device listed in iTunes and right click it (CTRL+click on Mac) and choose the item that says backup. Let it do its thing. When it is finished you can unplug it, but we suggest you hit the little eject button or right click to and choose eject. One last thing – if you have a few devices make sure that you remember what you called that devices. Mine is “Kevin’s iPad”.

Now you are ready to plug in the new device. It will show you the plug in icon on the iPad screen after it starts up. Follow the on-screen instructions in iTunes on the computer. It will give you the option to either restore or establish a new device, choose restore. You will be able to choose which backup to use from a drop down list (see below). 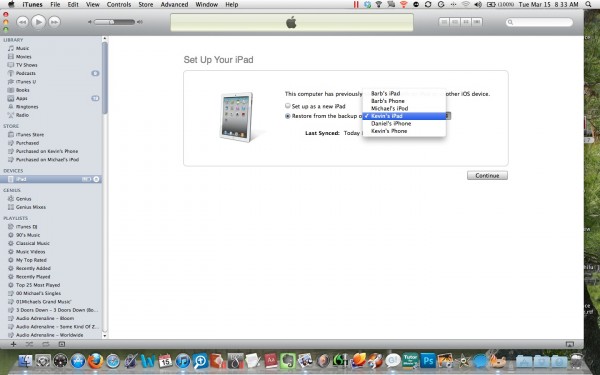 Pick your backup from the previous step and iTunes will load up the device with the backup. You will see the progress bar below while it is restoring from the backup.

iTuens will restore the backup to the new device

When it finishes the device will be restarted. You will get a box popping up to tell you to keep in plugged in. Just do nothing and wait while it reboots and reinstalls all your apps and syncs with iTunes one last time. You will have all your old apps, files and settings on your new device. You may have to go into some apps and set them back up again, but most of ours were in the state they were in when we last used them on the old iPad.

The whole process will take 15-20 minutes for the restore plus however long it takes to reload your apps and files depending on how big your backup is. On my 64GB iPad 2 backup up from a 16GB iPad backup initial restore took about 10 minutes and then reinstalling apps and syncing music, video, pictures and files took about thirty minutes.