It looks like the rumors about an Apple iPad 2 announcement on March 2nd are true. Apple issued an invitation to select members of the press for a March 2nd event. The invitation is for 10:00 AM at the Yerba Buena Center for the Arts Theater in San Francisco. It looks like the iOS calendar with the March 2 date and upper right corner pealing away to reveal an iPad. 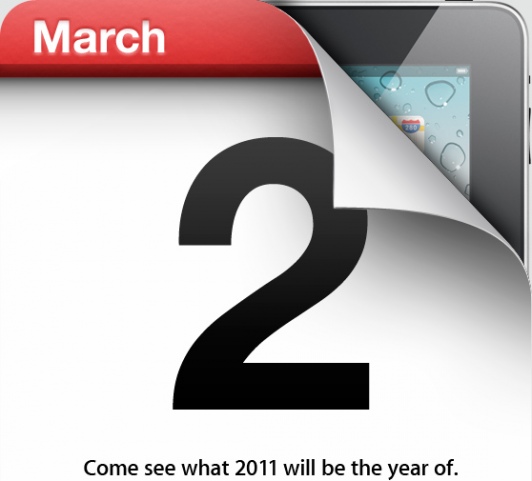 The caption reads, “Come see what 2011 will be the year of.” The invite is not exactly holding anything back. This will clearly be an iPad 2 announcement since the big 2 on the invite represents both the date and the generation of the device.

Notebooks.com and Gottabemobile.com, our sister site, have been all over the iPad 2 news and we will be there on Wednesday to bring you all the information as soon as we learn about it.

Here is a scoring list of what it might include with the ones we expect to actually happen in bold:

Which ones do you expect to happen and have we missed any? Comment below.