ZAGG, makers of the acclaimed Invisible Shield protectors for the iPad, iPhone and other devices sent us a very interesting iPad keyboard case to take a look at.

The ZAGGmate, as it’s called, comes in two versions. The first is just the “ZAGGmate” ($69) which is an aluminum case that and stand for your iPad that goes over the front of the device. The other, which is the one that we’re testing, is the “ZAGGmate w/keyboard” ($99) which is the same aluminum screen cover, but it also has a rather handy Bluetooth keyboard built right into its impressively sleek form-factor! 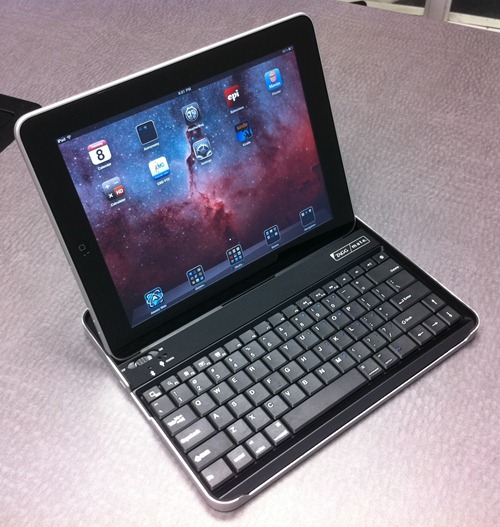 Here’s a quick video from ZAGG to get give you an overview of the ZAGGmate with keyboard: 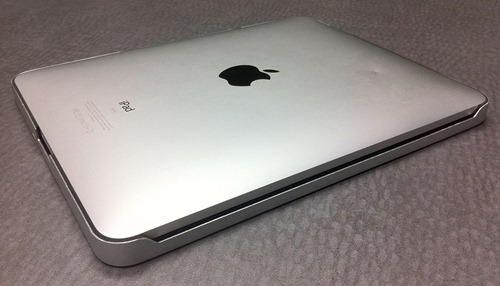 The ZAGGmate w/keyboard is designed to mimic the iPad’s aesthetics and does so well. The brushed aluminum looks just like the back of the iPad and the color is matched quite closely. 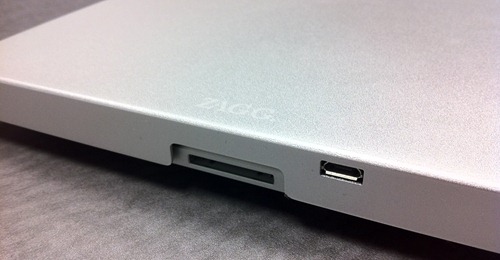 The outside of the case has nothing more than a subtle “ZAGG” logo on the bottom of the back of the case, and a micro-USB port for charging the keyboard. 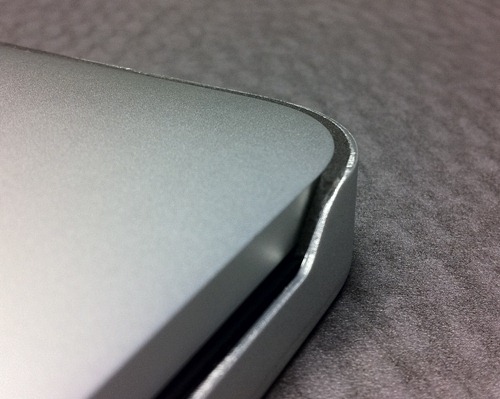 The ZAGGmate fits onto the iPad with a ultra-satisfying snugness, thanks to some precise machining and a neoprene-like material around the area that the ZAGGmate will contact your iPad. Not only does this ensure a tight fit, but it also will make sure that the iPad doesn’t get scratched as you put the case on and take it off.

My only worry about the lining that makes the iPad fight tightly is that it might wear out after some time. The duration of my test wasn’t long enough to verify whether or not this would happen, but between the padding losing it’s firmness (thus reducing the tightness of the fit) to the adhesive loosing it’s stick — there is a possibility of failure at some point down the road. At this time, the fit is so tight that I’d have to intentionally shake the iPad out of the case if I wanted it to fall out. 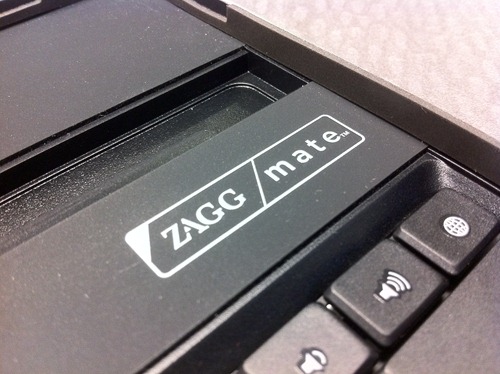 Any part of the ZAGGmate that comes into contact while it’s on the iPad are padded with a smooth rubberized material which let’s you be confident that the screen won’t get scratched when you put the case on. 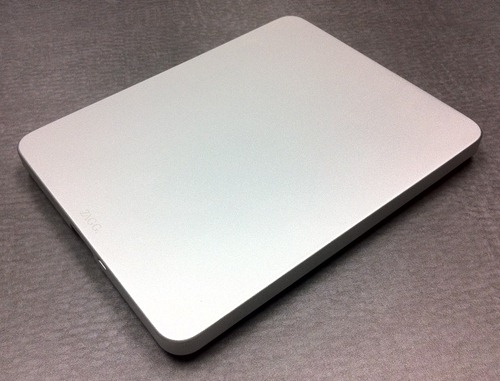 The close fit also means that the ZAGGmate hardly adds bulk to your iPad (compared almost all other cases) and this is great for anyone who commonly slips their iPad into a bag to take it with them.

One thing I didn’t enjoy out of the box was that the included pamphlet actually recommended putting a protector on the ZAGGmate (naturally, they recommend their own Invisible Shield brand) because the aluminum can get scratched fairly easily. This seems a bit backward as the ZAGGmate is designed (in theory) to protect your iPad, so why would it need protection itself? Can you imagine buying a case for your iPhone and then having to put another case over top of it? That’d be a bit ridiculous, right? 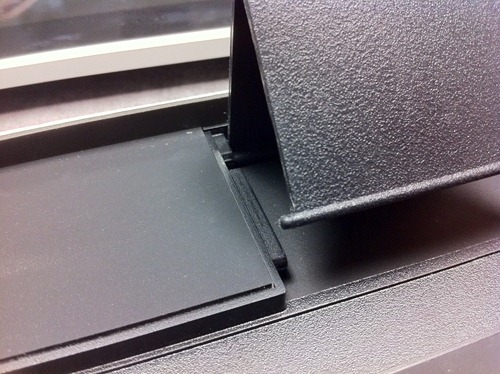 One of the only parts of the ZAGGmate that feels lacking in quality and design is the stand that actually holds the iPad up. It’s made of plastic and snaps into position with small plastic nubs that feel like they might break off after a decent amount of use. The stand only locks into one position which means just one angle of tilt for your iPad. The iPad has good viewing angles, fortunately, but some still might be annoyed that they can’t adjust the angle if glare is an issue. I’m presuming that they selected the one angle to ensure that the iPad won’t tip the ZAGGmate over during use. 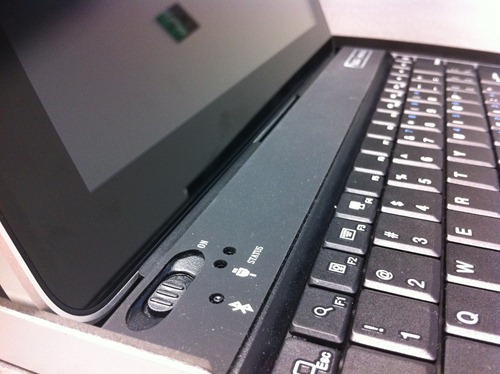 There isn’t much of a mechanism that actually holds the iPad into place. For the most part it just uses its own weight to sit in the trench, and there are little plastic pieces that slightly grab the aluminum lip between the iPad’s glass and bezel. It doesn’t actually “lock-in” to the keyboard in any sense, so don’t expect to be able to use it on your lap during a bumpy car ride; the ZAGGmate is definitely meant for table-top usage.

Getting the iPad out of the ZAGGmate works best if you hold it perpendicular to the surface that it’s sitting on, and use the dock connector as a grip to separate it from the case. 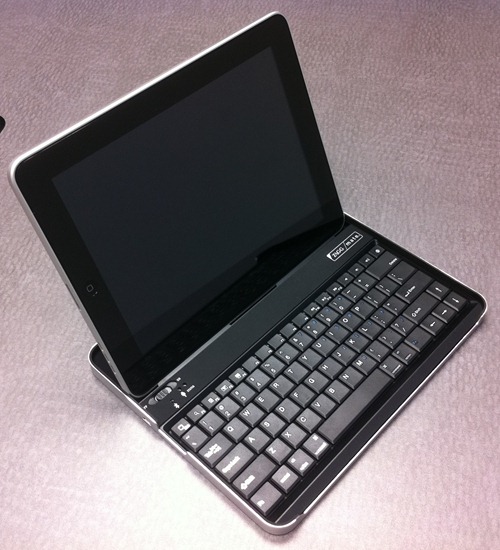 The ZAGGmate is heavy enough that it’ll keep the iPad upright in landscape or portrait mode, as long as you’re using it on a flat surface. 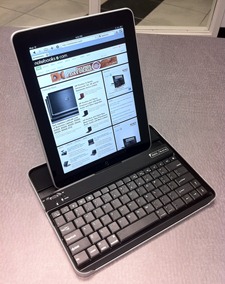 The keyboard on the ZAGGmate will really enhance your typing on the iPad. The benefits of using a bluetooth keyboard are two fold: First of all is the obvious fact that you’ll be able to type more quickly with the physical keyboard than the on-screen keyboard. Second, when using a bluetooth keyboard, the on-screen keyboard doesn’t pop-up so you have much more screen real-estate for what you’re actually looking at. 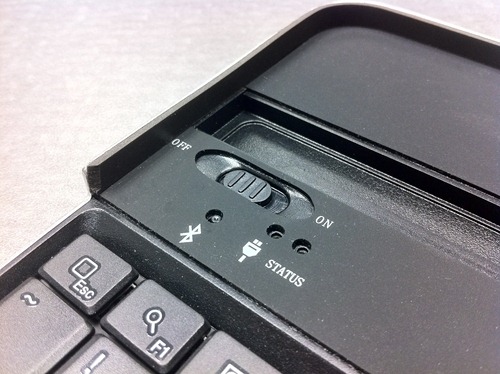 The on-off switch is nice for saving battery life, but it would have been neat if they included a button that would automatically be pressed by the iPad when it is put in the case, thus turning the keyboard off automatically so that you don’t have to think about it every time you put it away. 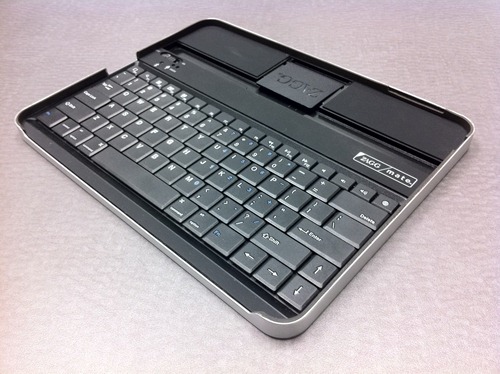 The keyboard itself is reminiscent of a 10” netbook keyboard. The keys have a classic laptop-style feel to them with great feedback and a good pitch (the distance that the keys press down). A proper shift-key on the left and right of the keyboard was greatly appreciated as many smaller keyboards that I’ve used in the past have either shrunk them down to single-key size or forgone one of them completely. The only keys I have an issue with on the keyboard are the tab and caps lock keys which didn’t seem to press down evenly. I couldn’t determine if this was a design issue or if there was something under the keys, but in the end it isn’t too much of a hindrance because they do work regardless of how they feel, and these keys aren’t used that frequently. While I’m on the tab note, I can confirm that the tab key will switch between text fields in both system dialogues and of webpages which helps with navigation of the cursor. 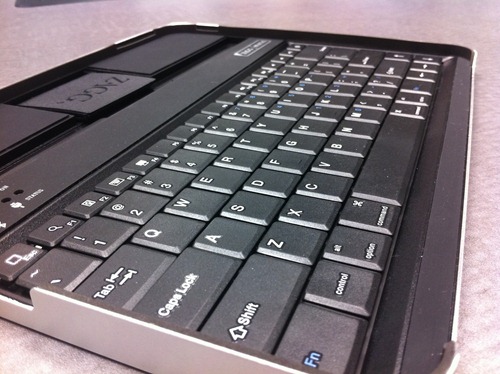 The keyboard has a full set of QWERTY keys, featuring everything you’d expect from a traditional keyboard, including a full row of half-sized function keys (F1-F12). Many of the function keys are have handy key bindings that perform actions on the iPad. For instance, the escape-key acts as the iPads home button. You can tap it to unlock the device (which even skips the “Slide to Unlock” slider), and you can even double-tap it to bring up the multi-tasking menu.

Furthermore, F1 will take you to the device’s spotlight search from anywhere that you might happen to be within the OS, F2 will start a slideshow, F3 toggles the on-screen keyboard (thought I’ve never needed to pull it up with the ZAGGmate attached), and F4 acts as the device’s lock button so that you can lock it without reaching around to the side of the device. There’s also play/pause and forward/back-track buttons mapped to F10 through F12 and volume up/down/mute buttons to boot! Very convenient. 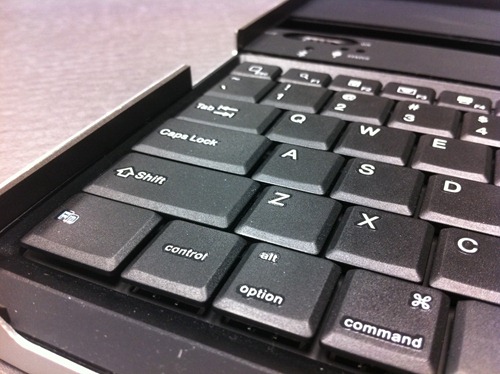 I wouldn’t say that the keys are quite large enough to allow for full touch typing (properly using all 5 fingers on both hands). I generally ended up using just my index fingers (otherwise it’d be too cramped), but this was way faster than typing with the iPad’s on-screen keyboard. I used the same app to test typing speed that I used in my capacitive touchscreen glove showdown, it’s called TapTyping, and I used it to test the iPad’s on-screen keyboard in portrait and landscape modes, and test the ZAGGmate’s keyboard. Here are the results: 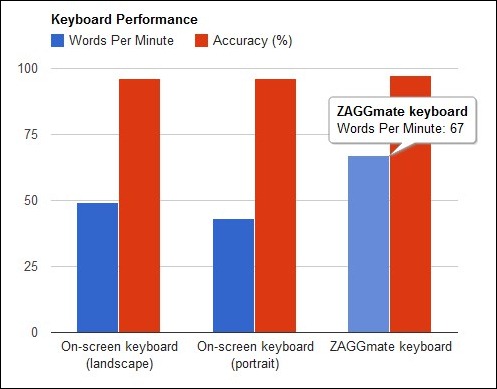 The ZAGGmate keyboard really gives you some serious typing ability and helps the iPad feel much more like a desktop computing experience. The fact that the keyboard doubles as a sort of case for the front of the device makes it really convenient to bring along. At $99, the price feels right for the ZAGGmate which is a well-built and very useful accessory (assuming that you do a lot of typing!). 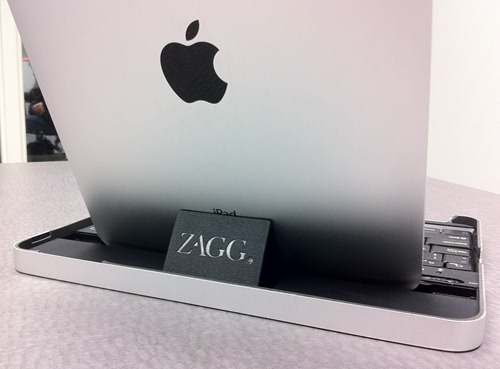