The iPad Space Dock, from LapWorks, is fashioned from a solid aluminum pipe making it a very durable dock for the Apple iPad. It’s size and the fact that it can be disassembled into two pieces makes it a space-saving accessory which will fit into an accessory bag, hence the name space dockâ€. 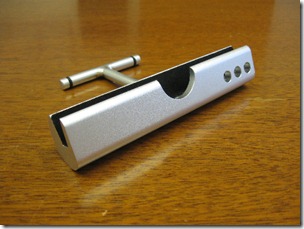 While most people use their iPads by holding them in their hands, sometimes users want to set them down and still have the screen viewable. Those users will need a dock. Apple’s iPad Dock is functional only in portrait mode. The dock connector and line out port on the back of the Apple Dock make it useful for hooking up to a speaker system and charger with just one connection for only $29. There is also a model with a keyboard for $69. However, they both only work in portrait mode, which is not very pleasing for video viewing and many other tasks. The iPad Space Dock fixes this problem since the iPad slides into the dock in either orientation. 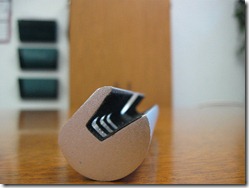 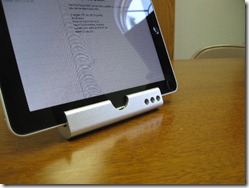 The Space Dock is a durable piece of aluminum with a brushed finish. The channel that actually holds the iPad is lined with velvet material to keep from scratching and grinding against the case. 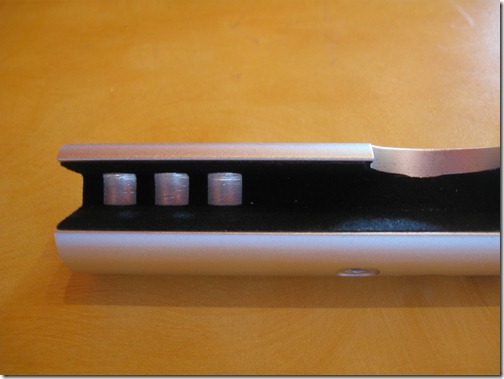 On the back of the tube are three fretted holes. A T-shaped leg is screwed into the holes to give the stand its stability. 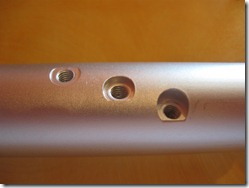 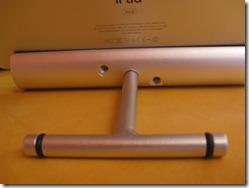 The holes are drilled into the tube so that when the leg is attached the dock can hold the iPad at three different viewing angles 58, 62 and 68 degrees. I found that the middle angle was the most secure and less wobbly than the others. But all three work  fine. 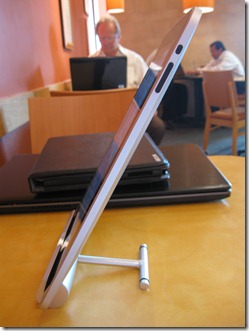 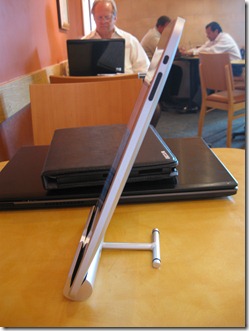 There are three holes in the front of the dock so that if the iPad is held in it in portrait mode, the sound coming out of the speakers won’t be muffled by the dock. In practice the holes amplify the sound to some extent. 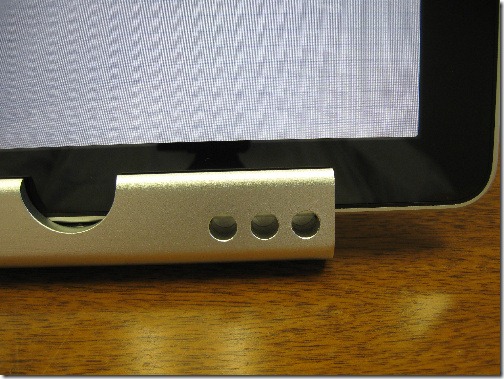 One of the problems with the dock is when the leg is screwed all the way into the dock the T-shaped leg is not always at the right rotation to lay flat on the table. The video shows this issue. The solution is to slightly loosen the leg so it rests flat. When it does the two black rubber pieces around the metal leg help keep it from sliding around too much. If the dock had some nonskid material on the bottom of the tube part as well, it would alleviate any concerns of sliding around. The stand didn’t slide very much for me, but I think this addition would be added insurance.

One issue that I failed to mention in my video review is that when putting the iPad in the dock, if the iPad is in a case it will have to be removed. There is only room for the iPad in the channel. 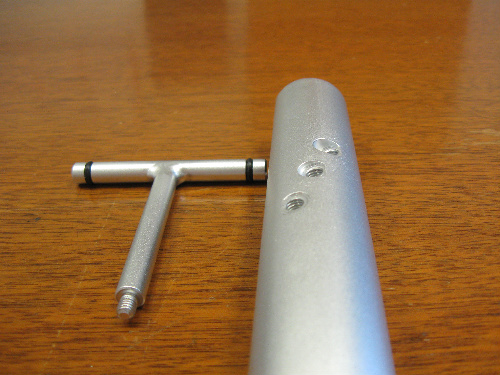 All of this makes this a great value and really useful accessory. However, there is still the question of cost. At about $40 this would be a great tool for holding up your iPad when watching video or using it in tandem with a typewriter. Unfortunately the iPad Space Dock is priced at $64.95. For a limited time the dock is available exclusively at the LapWorks website for only $54.95. You will have to decide if the price is right. I think it is a bit steep.