We highlighted Cinch before as part of our Tips for New Mac Users and the company that makes it has recently helped users who purchased this great little app before the App Store came out get access to the Mac App Store benefits. It is one of those apps that we use almost every single time we sit down to use our Macs.

For that reason Cinch has the honor of being highlighted in this new series of Mac App Store App reviews similar to our iPad App of the Week. 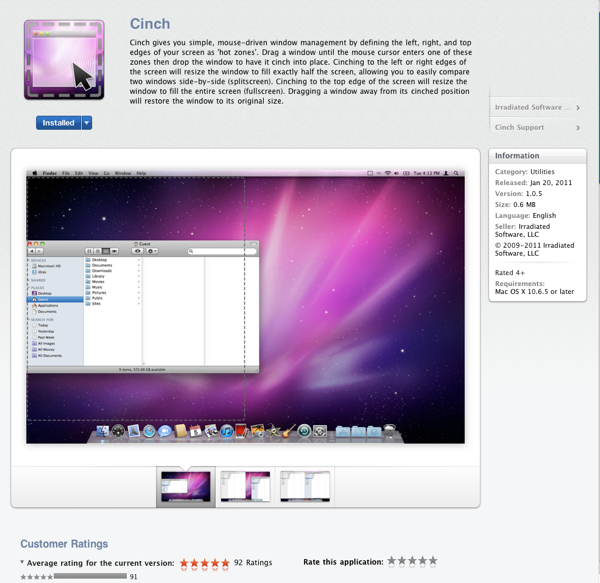 The Mac App Store Highlight! will be a unique app that can be downloaded from the Mac App Store. This will not necessarily be a weekly review, but just whenever we find an app that we think you should consider.

Cinch is a simple app that only costs $6.99 in the Mac App Store which gives Mac users the handy Windows Aero Snap feature. This is where a user simply drags a window to one part of the screen to quickly resize it. Windows users are often frustrated when using a Mac because the only way to resize a window is grabbing the lower right corner. This is far from ideal and Apple really needs to fix this. Until they do, we have Irradiated Software’s Cinch and its cousin SizeUp. Only Cinch is in the App Store so we won’t highlight Size Up, but it does the same thing but with keystrokes instead of a mouse.

Cinch runs in the background and installs itself as a menulet in the menu Mac OS X. When a user wants to resize a window to cover only the left or right half of the screen, instead of dragging it to the side and then resizing the window by grabbing the lower right corner only. Now with Cinch running just drag the app to the left and a dashed line appears around the window and it automatically resizes to cover the right half. Do the same dragging it to the other size to cover just the other side. And drag it to the top to go full screen. Below is a video demonstrating the app.

This is a very simple and inexpensive app that provides a feature that should be built into the OS. It works and is stable. It will run automatically if you set it to in the Preferences, which are found by clicking the menulet. Only rarely does an application not work with Cinch.