The Toshiba Satellite e205 is a Blue Label Notebook from Best Buy that offers a lot of really cool features in a sleek package. The Toshiba e205, including Intel Wireless Display and a NetGear adapter, is $899 at Best Buy.  We tested out the Intel WiDi technology in our Toshiba e205 hands on and after another 2 weeks of use we are ready to share out full impressions of this entertainment notebook.

The Toshiba e205 is powered by a 2.53GHz Intel Core i5-430M processor, has 4GB DDR3 RAM, a 14″ display running at 1366×768 and a 500GB hard drive. It also includes a backlit keyboard, DVD writer and Intel Wireless Display for wireless HD streaming to compatible HDTVs or the included NetGear Push2TV adapter.

Who is this Notebook for?

The Toshiba e205 notebook is a great notebook for college students, entertainment junkies and even power users. This notebook would fit in just as well streaming to an HDTV in a dorm room as it will in a large living room. Thanks to the classy blue-metal cover and sleek form factor it is both fun and professional. The battery life is decent enough to take to class or on short trips, though the 5.1 pound weight means you won’t want to carry it everywhere you go.

The Toshiba e205 has a 14.1″ LED backlit HD display capable of 1366×768 and native 720 P resolution. The display will default to 720P when you are using the wireless streaming feature, and can only be used in mirror mode. This means that while streaming a video to the TV you won’t be able to work on something else. There is also a slight delay in the video as shown on the notebook and on the TV screen, so you need to pick one to look at if you are doing a task.

Back to the display, I found it very usable. The screen can be tilted back pretty far to accommodate many working situations such as in bed, in a car or at a desk. I found the brightness of the display to be quite good, with a half-way setting being sufficient for general use and the high setting excellent for watching a movie on the device. While the display is glossy, it is not as bad as some displays; though don’t plan to use this notebook outside all the time.

The best part about the Toshiba e205 keyboard is that it is backlit which makes it easy to type in low light situations. In my use, I found that the keyboard was acceptable, but not the best I have used. If you plan to write some term papers and email it will suffice. If you are preparing your dissertations, you should purchase an external keyboard for extended sessions. The keys are stiff enough, but there is a little bit of flex in the middle of the keyboard if you are a hard typer. Key placement is OK. A full size Shift key on the right would be good and it would be great if the volume down button, which beeps when pressed, wasn’t right next to the right arrow as my pinky hit it 50% of the time I reached for the arrow.

The mousepad is pretty generous and I like the large separated buttons. There is a small gap between the touchpad and the buttons, which is an interesting design decision, but doesn’t hinder use of the mouse. The touchpad support gestures like pinch to zoom and two finger scroll for easy webpage navigation. The mouse buttons are hinged at the edge of the notebook which means to use them you will need to push closer to the mousepad. This isn’t a major issue, but you may want to spend 2-3 minutes with the machine at your local Best Buy to try it out.

I was impressed with the battery life on the Toshiba e205. It’s not an all-day notebook by any means, but when I was typing, browsing the internet and using Tweetdeck I was able to get just over 4 hours before I was prompted to plug in to work. This was with the keyboard backlight on and the screen set to two-thirds brightness. When I streamed a 45 minute episode of Burn Notice to my HDTV battery life took a major hit dropping to just 2 hours and 4 minutes with the remaining time spent browsing the web. This isn’t a surprise, and it shouldn’t be a major issue since most of the time you will be streaming over WiDi will be in your home with easy access to a power adapter.

The Toshiba e 205 is an entertainment notebook, a point driven home with the Intel WiDi feature, and as such it handles almost any kind of media you can throw at it. I was able to stream any online video source to my HDTV over WiDi without any trouble. I was also able to display a 1080P (transmitted at 720P) copy of the Big Buck Bunny movie to the HDTV without any problems. When it comes to watching movies on the optical drive they play OK on the notebook’s screen, but not all can stream to the HDTV due to use constraints. In all, this isn’t a major issue since most HDTVs will have a DVD player of some type connected, but it is worth noting.

Visit WalletPop for more on how the Wireless Display feature of the Toshiba Satellite e205 can help you save money on your cable bill.

The Toshiba e205 has a Intel Core i5 processor powering it and I found that it could handle anything I wanted to do. Even with 3 word documents, 2 excel files, 3 chrome windows with numerous tabs and music playing I never experienced a slowdown. I also did some minor HD video processing in Windows Live Movie Maker which was pretty speedy.

When in entertainment mode, playing a movie or wirelessly streaming, the Toshiba e205 still performs well. I didn’t notice any slowdown when playing back HD content either on the screen or streamed wirelessly to my HDTV.

When used for extended periods, the Toshiba e205 does get a little warm in the palmrest area and on the bottom, but not too hot to use. If you are planning to do an extended wireless streaming session you set the notebook on a well ventilated area, not on your lap or on a couch, to make sure the built in ventilation can do its job.

I tried running the Dirt 2 Demo on the e205 and was only able to get a blank screen and sound. While this notebook performs well for viewing multimedia, don’t look to it for a gaming notebook.

The Toshiba Satellite e205 has plenty of ports to keep you connected.

There is also a wireless switch on the front of the machine.

The Toshiba Satellite e205 is a pretty amazing notebook. Most of the issues I discovered during my use were minor and don’t take away from the fact that this is a powerful notebook that is perfect for college students. It would be great if the notebook had all-day battery life, but given all you can do it is acceptable. There’s no denying that the wireless streaming is an incredibly cool feature and one that really makes the device. If you love to consume media — online, on your notebook and on your HDTV — then the e205 is perfect for you. If you find yourself editing a clip for YouTube or touching up a few photos, it’ll do that too. 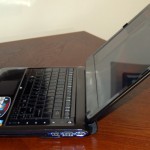 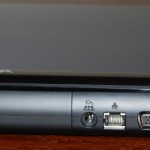 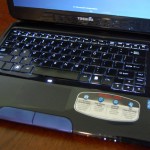 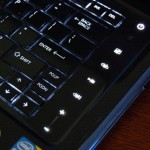 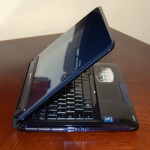 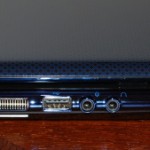 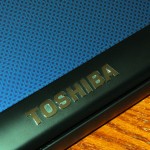 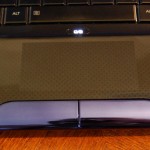 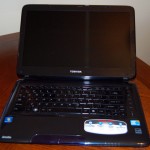 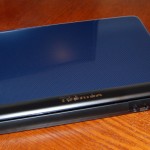