How to Add a Camera to the iPad with an iPhone

One of the most glaring omissions on the iPad, according to many reviewers and pundits, was a camera. Now, in true Apple fashion, there’s an app for that. Well, two complementary apps anyway. To add a Camera to your iPad, via your iPhone, keep reading. 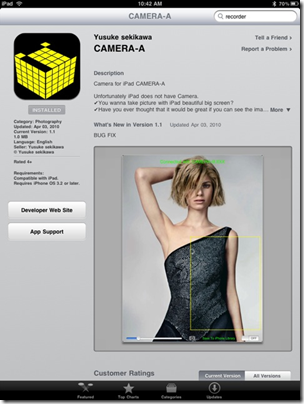 On your iPad, go to the App store and search for Camera A. It costs $.99. In the iPhone App store search for Camera B. It’s free. Make sure both devices have Bluetooth turned on and fire them up. Be patient, as it took more than a minute to connect the two apps the first time; but after that pairing was quicker.

Once the iPad screen is displaying what your iPhone Camera sees, they are connected. There is a slider at the bottom of the screen if you want to zoom and a toggle switch that will let you choose whether or not to save the picture to the iPhone library. When you are ready to take a picture, hit the camera icon on the iPad. 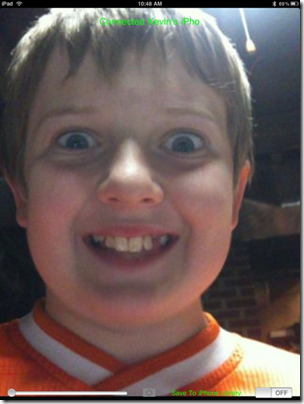 Drawbacks: First, the images are at the lower resolution of the iPhone’s screen. So they will not be high quality. Below is a picture of my son Daniel taken using the app at the images full resolution. Realize this was in a very bright room, so the quality is not going to be great. 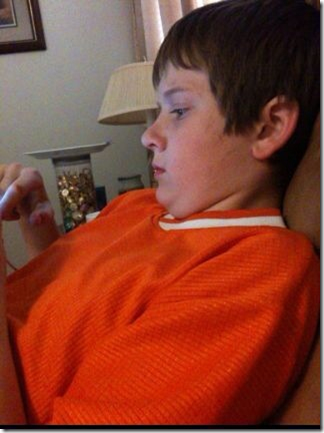 Second, the convenience of having to wield both devices is not great. It might be easier if you actually took the picture with the iPhone screen and sent it to the iPad. But you have to tap the iPad screen. I put the iPad down and hold it to get the image above.

Third, it is very buggy. After a few times it now freezes each time at the point where it shows image of a closed iris of the shutter.

So what would you use such a tool for? Not taking great pictures. The iPhone pictures are much better quality natively. Some have suggested it as a voyeuristic tool for looking around corners. If you are a spy, that might work. In reality it is primarily a novelty.  But what is really interesting about this app is that is shows some interesting possibilities. Could one use the iPhone camera, along with an iPad for video chat? Maybe you can control more than the camera and use it to actually make calls on your iPad. Again, not sure why you would want to if you have an iPhone already — but there are some interesting possibilities.

A similar product is called Camera for Ipad and will also work between an iPhone and iPod Touch for the same cost. And an added benefit of this second app is it works even with a 3G iPhone. Camera A/B only works with 3GS.

UPDATE: There is now an update in the app store to make the app compatible with the iPhone 3G.