Apple claims that half of those who purchase a new Mac at their brick-and-mortar Apple Stores are first time Mac users. That means the buyers either did not have a computer at all or were using a PC with either Windows or in rare cases Linux. Making the switch can be daunting, so here are a few questions that users might face as they try to get used to their new Mac OS X digs. 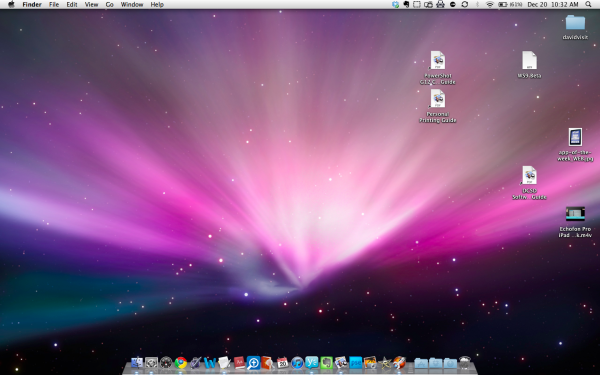 Windows users are able to manage windows quite simply. One of the most frustrating things to get used in Mac OS X is the way windows are manipulated. In Windows there are three buttons in the upper right which maximize, minimize or close windows. First, in Mac OS X the comparable buttons are in the upper right and they are not really the same.

The red button closes the window as the X does in Windows. But it doesn’t close the program. You can tell that the program is still running because on the Dock (the Mac OS X version of the Windows Taskbar across the bottom of the screen) the program’s icon has a little glowing blue dot below it. Programs that are not running do not.

Looking at the image, the Google Chrome icon has the glowing dot. It is open even if the Window isn’t showing. The Pages icon next to it does not because it is not running, nor is Microsoft Word. 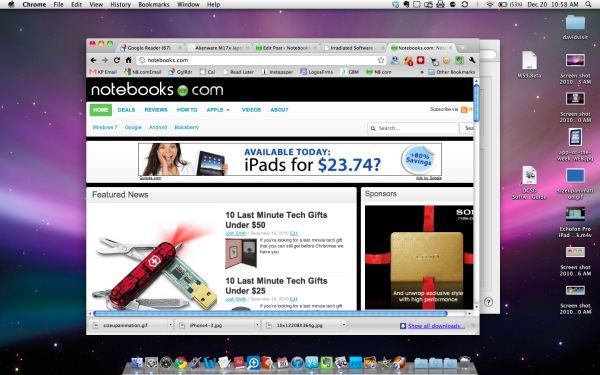 The most confusing thing is the green button. It has a plus so it makes you think that it maximizes the windows, like the plus button does in Windows. Not so. It is better seen as a zoom toggle. A window will fill the screen vertically but not horizontally. The green button will toggle between filling the screen vertically (see below) or not filling it (see above). This might be the most annoying feature of Mac OS X for people switching from Windows. 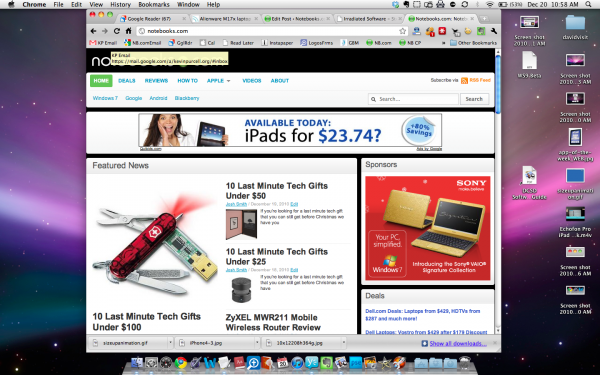 In Windows 7 tiling windows on screen is a simple right click of the task bar away. An even faster way to do it is to drag the title bar to the left or right side of the screen to cover half the screen or to the top to go full screen. And simple keystrokes also make this easy, like Windows + D to see  the desktop.

In Mac OS X this window management is not as straight forward. There is not a way to automatically tile windows so two windows show on each half of the screen. However there is a way to see the desktop using the Expose’. Go into System Preferences and open Expose’and Spaces. Using Active Screen Corners you can select one of the corners to serve as a hotspot to show the desktop. Click on the drop down box of one of the hotspots and choose Desktop. Now, whenever you put the mouse into that hotspot region the desktop will be shown. Play around with these settings as they offer other helpful tools for viewing what is open on your system (see image below).

For example I have the lower right corner sent to show all the open windows and the upper right to show the desktop. You will have to get used to avoiding these locations on the screen with the mouse cursor if you don’t want to activate it. 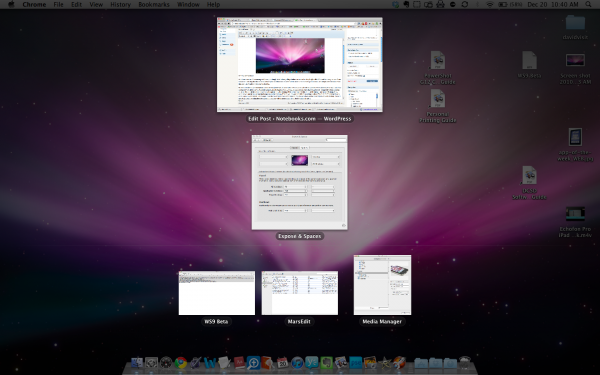 To be able to tile windows you will need an add-on. We use one called Cinch. It is a $7 application that runs in the background when you start your Mac. With it running you can drag a window to the left to have it fill the left side of the screen. Drag it to the right and does the same on the right side. Drag it to the top and it fills the whole screen. The video below demonstrates how Cinch works.

Another piece of software from the same company is called Size Up. It also helps with window management by using hotkeys or keystrokes. Send a window to one of the four quadrants of the screen or to the left or right side, just like you would in Windows using the Window plus left or right arrow keys. It costs $13.

The last problem for Windows to Mac switchers is resizing windows. In Windows it is as easy as grabbing the edge, any edge, and dragging to get it the right size. Grabbing a corner, any corner, will resize two sides at once. But for some strange reason on a Mac only the lower right corner can be used to resize the window. So the solution is position the Window where you want the the upper and left borders to be and then grab the lower right to resize the window to the right position. You will know what to grab because it has little lines at a 45 degree angle in the corner (see image).

We already talked about minimizing windows versus closing windows. But how do I close application so they are not running at all? You already know that hitting the red X button doesn’t work. There are three ways to close programs and fully shut them down in Mac OS X.

Technically there is a forth way, but should only be used when a program freezes. And yes, despite what we Windows users were led to believe, Mac programs do crash and freeze. This method is called Force Quit and is accessed by clicking on the Apple menu in the menu bar at the top of the screen. Choose the little Apple icon and the Force Quite. Pick your application from the list and click the Force Quit button.

As we said previously the little blue glowing circle under an application icon on the dock indicates that it is running, even if you cannot see the application. You will notice that the Finder application is always running and will not shot down. There is no Quit Finder item in the Finder menu across the top of the screen. And when you right click Finder there is not Quit option listed. This does not mean your Mac is broken. It is comparable to the Explorer.exe program that always runs on a Windows PC. Finder is always running on a Mac. You cannot close it.