If you have wished you could migrate an app purchase from an external purchase to the Mac App Store, you are currently out of luck for the majority of the apps. But Irraddiated Software, makers of one of our favorite utilities, Cinch, have figured this out by offering refunds to buyers who prove that they have re-purchased the app in the new Mac App Store. 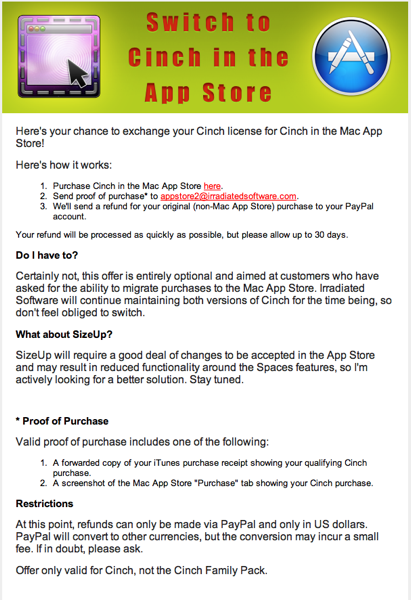 Cinch is an app the gives users the Windows-like feature where a window can be dragged to automatically resize it. Drag the app window to the left side and it will automatically fill the left half of the screen. Drag to the right and it fills the right. Drag it to the top and it fills the entire screen. This little $6.99 app is an excellent add-on especially for people who have gotten used to the Windows feature, which is built-into Microsoft’s OS but missing from Mac OS X. We mentioned it in our Tips for New Mac Users. See the video below for a demo/review.

The problem users have is, if they purchased an application before the Mac App Store came out, or outside the App Store before an app made it into the store, they cannot download it from the Mac App Store for free. They will have to re-purchase the app.

One might want to have their apps available in the app store because it makes downloading them more than once on more than one computer easy. It also makes getting app updates much simpler. Just go into the Mac App Store and click on the Purchases icon in the toolbar at the top. The list of apps purchased will be there. Any that are not installed will have a button next to it to simply download and install it. Any that have an update available will show with a highlighted Update button. Click it and the update will download and install automatically.

Irradiated Software sent users of Cinch an email saying that if they will re-purchase the app in the Mac App Store and send proof to them, they will refund the original fee paid for purchase outside the app store. Either forward your iTunes receipt that Apple sends to the registered email address or send a screenshot of the Mac App Store Purchases tab with Cinch showing as a purchase. Either one can be sent to [email protected] They will send the refund to the buyers PayPal account used to originally purchase the app. It could take up to 30 days. We just submitted our proof of purchase and have not yet received a refund.

Their other app, SizeUp, which does similar window management things but using keyboard shortcuts instead of the mouse, is not yet in the App Store. Once they get approved, they might offer the same deal.

This is a great solution for lower cost apps. It might not be as feasible for more expensive apps, as people might be willing to wait 30 days for a refund of more than $50-$100. But we hope all companies will consider offering this kind of program to make migrating purchases to the App store possible.