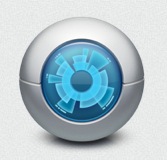 Daisy Disk ($19.99 in Mac App Store) is a utility that will help you track down which folders on your Mac hard drive are taking up the most space. It shows you the results in a visual graph and allows you to drill down to see what is hogging all your hard drive’s space.

We like the app because it displays the folders in a visual way, making it obvious what is taking up the space.

First, you see a simple list of the hard drives connected to your system. Click on one of the colored segments around the circle and it expands that to show the folders below it.

Daisy disk's drive list shows how much space is used

On the right side there is a box labelled Scan. Click it and the program very quickly reads what is on the drive and shows how much of the drive is used in a single bar. Above you will see that the main drive in my MacBook Pro has 237.4 GB of data on a 499.8 GB drive. To see what folders are using space just click the drive’s view button, which replaces the Scan button once it finishes reading the drive. 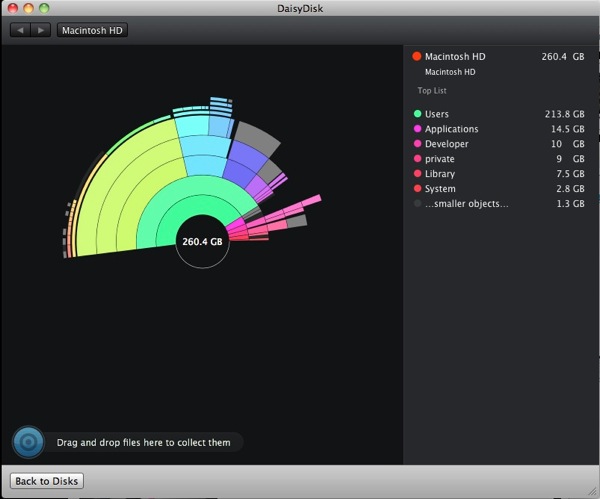 The drive graph visually shows which folders are largest

The circle in the center represents the drive. Each color around the circle represents a folder on that drive. Above you can see what folder is represented by what color from the list along the right. The space used is shown the far right column. Click on any of the colored arcs or on the folder name in the list, and the diagram changes so that the folder is represented by the circle and the sub folders are the new colored arcs around that circle. Click again and you drill down deeper.

So what does this do for you? If you find that you have a folder of wasted space used up by files you no longer want or need, then you can drag them to the blue target in the lower left. It is labelled “Drag and drop files here to collect them.” Once you have collected all the files that are unneeded, the target turns green. 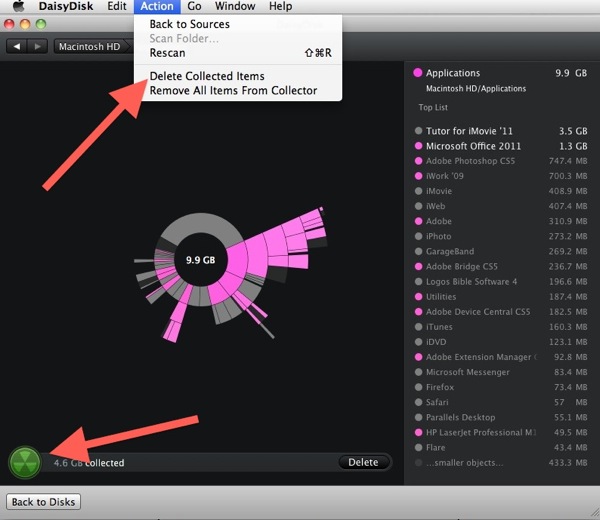 These are collected files. You can get rid of them by choosing “Delete Collected Items” from the Actions menu. As a result you can free up much needed disk space. This can be especially helpful on a computer with a small SSD flash drive like the MacBook Air. If you accidentally put folders into the collector, just click the Action menu and tell it to “Remove All Items from the Collector”.

Our only concern is for users who are not knowledgeable as to which folders do what. If a user sees a large folder and just deletes it without thinking or knowing what it is, they might be getting rid of an important application. Also it would be nice if it would also find files that are obviously junk or unneeded like Internet cache files.

For $20 Daisy Disk is a nice way to hunt down which folders are taking up a lot of space on a cramped drive. While we haven’t tried it out yet, one alternative to Daisy Disk is called Space Gremlin and is just $4.99 in the Mac App Store. Just from the screen shots it doesn’t look as appealing, but it is also a fourth the price. 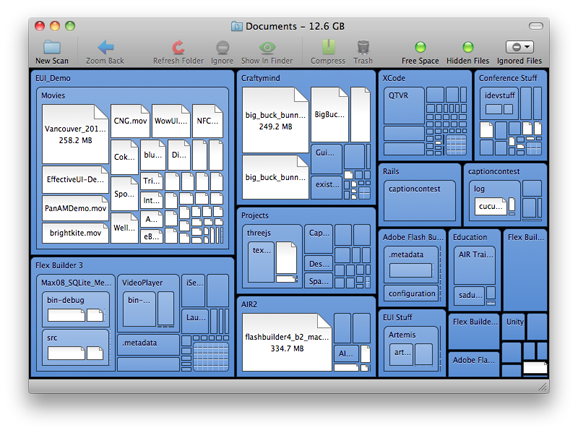