How To Buy Movies to Watch on Your New AppleTV

There was a lot of hand wringing from the technorati regarding Apple’s decision to no longer allow users to buy movies directly on their Apple TV. That’s right; the new Apple TV is rental only. But there is a really simple way around this so long as you have either a computer running iTunes and either an iPad/iPhone with iOS 4.2 or even an Android Phone or a windows notebook.

In my review of the new Apple TV, streaming content over a wired network from your computer is very smooth. I did not notice any difficulty in watching any of the movies I have in iTunes on my desktop system. And wireless networking of Apple TV was also quite good, although I noticed a couple of times when audio and video were out of sync.

Overall buying, downloading and then watching shows on the combination of a computer and an iOS device works well.

There are three different workarounds. Two are available now and the third is not yet implemented, but will be as soon as the iPad is updated to iOS 4.2.

Sneaker net is the term used in the old days when it was hard to network computers. Instead of sending a file across the wires or airwaves to other computers, we would copy them to a storage device (usually a floppy back then) and walk to the other computer. People still do this, but wired/wireless networks are more prevalent.

One way to buy content to watch on an Apple TV is to first buy it on a computer. Open iTunes, find the show/movie to buy, and then do it. After it downloads it will be available to the Apple TV and ready for viewing. 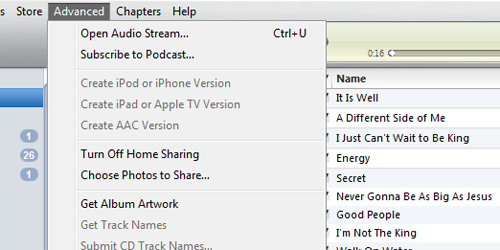 This requires Home Sharing in iTunes to be turned on. In iTunes click on the Advanced tab and turn on Home Sharing. This will prompt you to enter your user name and password. Now the Apple TV will see the iTunes library if it is configured properly. This only requires the Apple TV to be on the Internet and have the Apple Store credentials also entered. Now the computer with iTunes Home Sharing turned on will see the computer when you select Computers from the main screen.

From an iOS Device

Here is the best way to watch the content from your computer on your Apple TV. Sadly it is not yet implemented, but will be once iOS 4.2 is released. It works by using the free Apple Remote app on an iPhone or iPad.

Once the app is running it will go into settings, turn on Home Sharing and add your Apple user ID and password. It will then offer all the libraries available. Choose the one that has the iTunes content you want to play and make sure it has a check mark next to it. Then the Library content will show up in the Remote. Use the menus to find the movie, hit play and then tap the AirPlay button and show on Apple TV. It should start playing on the Apple TV.

The first solution is the best way to do this if your Apple TV and your computer are close together and you don’t mind walking over to it or you have it sitting on your lap. The second will be the best way once iOS 4.2 is released. But there is still a third way that allows a person to buy content and download it for play on an Apple TV that doesn’t require the user to go to a PC. Instead you bring the computer to you using a remote log in app like LogMeIn Ignition or one of the many other apps.

We previously showed you how to use LogMeIn to control a computer and to use an iPad to ink on a desktop. Why not use it to run iTunes remotely and look for and buy content using the computer? Following the steps in our hands on will show you how to get LogMeIn set up. Just fire up iTunes, look for the content you want to stream to the Apple TV, and enjoy!

If you don’t have an iPhone or iPad, this is the best way to stream purchased content on your Apple TV because you won’t be able to run the Apple Remote app. There is a LogMeIn client for other smart phones like Android. Or you could use a Windows notebook running the LogMeIn Free version for Windows.

You may not want to spend $30 on the app, which is understandable. I still believe it is the best one and worth the money. But there are other remote log in apps available.