Earlier this week one of our writers, Ben, showed you how to use your mobile phone to do some star-gazing. He focused on iPhone and Android apps. Inspired by his great post, we decided to show off Star Walk as this week’s iPad App of the Week.

Star Walk is a visually beautiful app that helps you find stars, constellations, planets, and other heavenly bodies and formations. When you open the app, it displays info about the Sun, Moon and planets that can be seen in the skies. It gives things like the objects rise and setting time as well as the elevation. For the moon it shows the phases of the moon for the previous day, today, and the next few days. 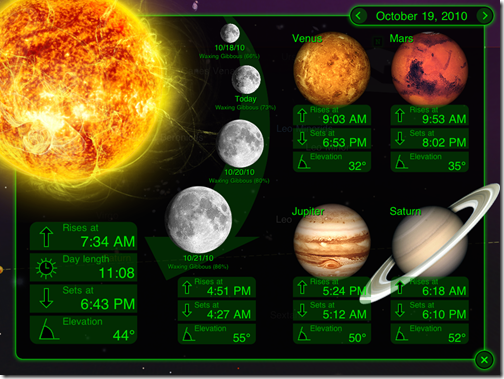 Tap the little X icon in the lower right to show the current sky. The screen will display the horizon with all the bodies that are visible at that time.

There are four icons in each corner. The lower left icon brings up the search panel. All the major constellations are listed on the first tab. You can scroll down the list and tap an item to display it in the main screen. Or you can type a name into the search field. The other tabs across the bottom of the search pane are for bodies in our Solar System, like the planets and major comets, Messier which are objects catalogued by French astronomer Charles Messier, and finally Stars. 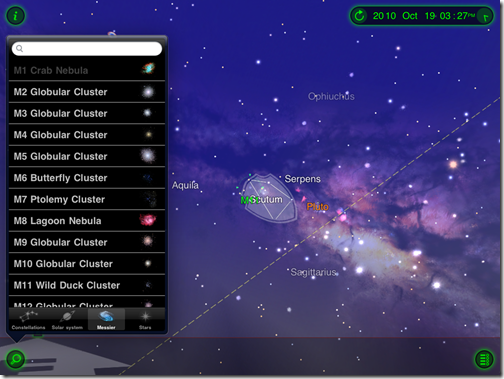 Once you tap an item it is displayed in the screen next to the list, as you can see above. Tap that item and then tap the little info icon in the upper left and the object will zoom in to fill the screen and a box with information about that object will be displayed. For example, below is Pluto with its information. At the bottom there is a link to the Wikipedia page about the object. This is a great way to learn more. The page is displayed right there from within the app. 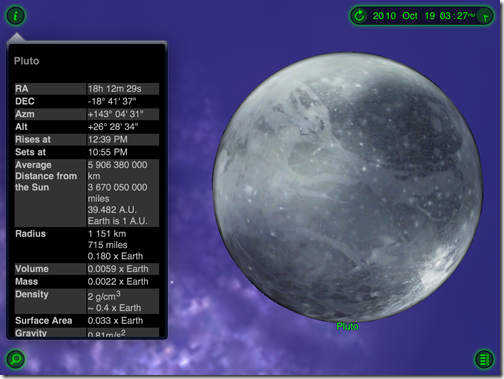 In the lower right corner is a menu icon. Tap it and you get a list of various functions. The Sky Live will open the main screen that is displayed when the app is first loaded. 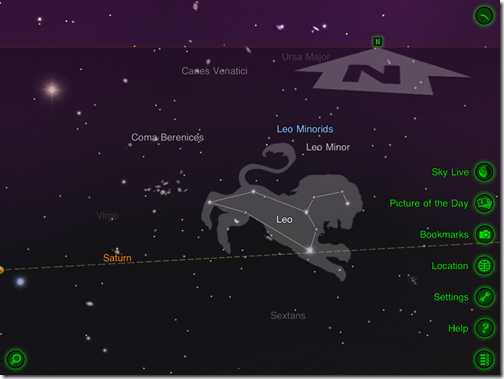 The picture of the day shows a random image of some space object or formation. There is also a Bookmark function to save certain items for later use. The Location button will zoom out from the earth and show your current location on the globe (see below). 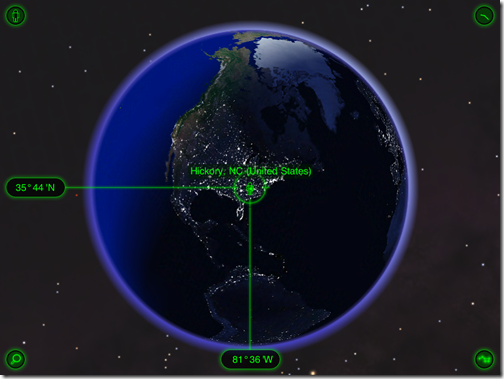 Finally, there is the Settings and Help menu items. Settings are pretty basic. You can turn on/off certain things and change screen brightness  as well as toggle sounds effects and music. The music played is very spacey but can be annoying after a while.

The upper right corner icon brings up the timeline. Drag up or down on the time line to show the rotation of the sky. It keeps going till you stop it.

[Below is the video demo; sorry for sound and video quality. That was due to filming outside to demo the app.)

One of the coolest things about the app is the fact that it uses the compass and your current location (using the GPS for 3G iPads or the Wi-Fi based location system for Wi-Fi only) to show you exactly what you are looking at in the sky. For example, if you are facing north, the app will show the northern sky. As you rotate around it changes. Raise the iPad and over your head to see what is directly above you. It will even show what stars or objects are below the horizon that are not currently visible.

This is a beautiful app with a lot of great information for serious start gazers or people like me who just like to look up and wonder what constellations are currently visible and what is that big bright light below the moon. My only complaint is that getting it to move from showing a static screen to showing a motion screen that moves with the iPad can be tricky. I often had to rotate the iPad from landscape to portrait mode to engage this feature. But once it is engaged it is very nice.