When Speck sent us a couple of their new iPad cases for review (here and here), I was excited. Tossed into the shipping package was a “two-pak” of their ShieldView Anti-Glare Matte Finish Protective Screen Films with Cleaning Cloth. I was not that excited about this product because I have tried touch screen protectors on my iPhone, iPod Touch and Windows Mobile phones before. They never lasted more than a day and usually just hours before I quickly removed them in frustration. In general I avoid these types of screen protectors; but the good folks at Speck were kind of to send it and so I felt it was my duty to at least give the anti-glare screen protectors a shot. 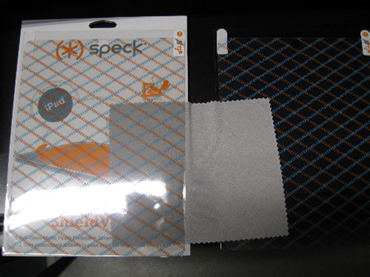 Installation of these kinds of screen protectors is never a lot of fun. But if you are patient, you can do it. I followed the instructions carefully wanting to give the product its best shot at working. With Speck’s protectors you have a screen film with two pieces of adhesive covering both the front side and the underside. 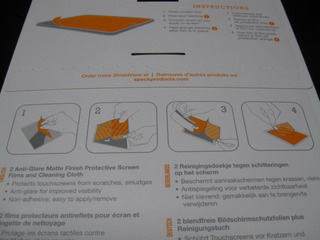 The instructions say to clean the screen first. They include a nice little lint-free cloth to do so. I also used my screen cleaning solution that I use when I want to get things really sparkling. I buffed it dry and let it sit for a moment. 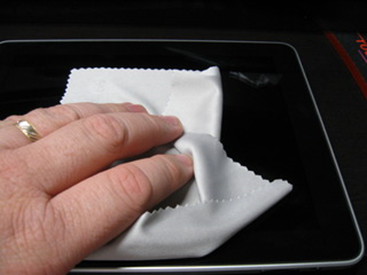 Then I peeled back the side with the diagonal blue pattern, as opposed to the orange pattern on the front. There are two white tabs that you use to begin removing the plastic. I carefully positioned the protective film over the iPad and pressed down. 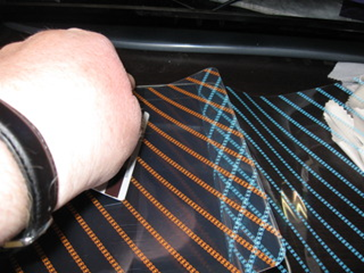 This is where patience comes in. You have to move very slowly and deliberately. Get out a credit card or very firm card of some kind and do a squeegee kind of motion to make sure that no air bubbles get caught between the film and the iPad screen. Keep going until the whole plastic is removed and the screen protector is firmly in place. If you move too fast, the part of the protector you have already applied will actually start to pull up away from the iPad screen, adding more bubbles. I am not a patient person so this was excruciating.

Try to squeegee out any remaining air pockets going from the center out. Use your fingers or the card. If you are a very exacting type of person this will drive you nuts. There are going to be bubbles. You cannot get them all out. The goal is to make them unnoticeable when the iPad is turned on. As you can see below, I missed a few and no matter how much I rub or squeegee I cannot get all of them out. But they are not that noticeable once the screen is turned on. 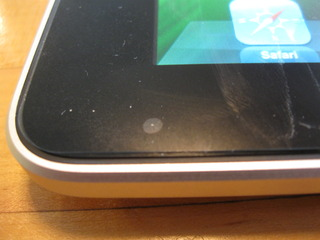 Finally, slowly remove the plastic covering with the orange pattern on it. Again, be very slow as you don’t want to pull the protector away from the screen.

So was I right to fear the product? Not really. The application of the screen protector is straight forward, even if it is slow and painstaking. You have to be deliberate or you will end up with a lot of air bubbles. I think that cleaning the screen with a moist lint-free cloth helped. The protector, once applied, does not really affect touch. You can tell it is there, as since swiping is not as fluid; but it is not that much of an issue. I have now had it on my iPad for 24 hours and I am not rushing to remove it like I have before with similar products.

Using my Pogo Sketch Stylus with the protector is a little harder than touch. Also, the matte finish reduces the brightness and glossiness of the screen. That might be a good thing for some. There is a graininess similar to the HP TX series convertible tablet PCs, like my TX2500. It is not overly noticeable, but you can see a difference.

So there is a trade-off to having a protective coating on the screen. You will have to decide what is more important a clearer screen or a protected screen. If you prefer a protected screen, I don’t think you will be that disappointed with the Speck ShieldView. However, if even a light graininess on the iPad screen or even the slightest reduction in fluidity as you swipe or use a stylus seems bothersome, you may want to avoid screen protectors in general. I have not used any other protective shields on the iPad, but compared to the ones I have tried for previous devices, Speck’s is better.

This is by no means a ringing endorsement of the product. I think this kind of thing is a per user decision. Some will hate having a screen protector while others will consider it unimaginable to not having protection on the screen, especially if the iPad is used in certain environments or if children will have unfettered access to it. For them, this is a good choice. If you are on the fence, then give Speck’s ShieldView a try. The company has a generous return policy.

I plan to keep the protector on my iPad for now. I am actually closer to the first camp of people who would rather not have the screen covered at all, so the fact that I am still using it means something.

You can get the ShieldView from Speck for $24.95. In the package you will get two ShieldView screen protectors and a nice lint-free cloth.