The Acer Aspire AS5745PG notebook is in a small group of notebooks that have a multitouch screen built into it. While we commonly see such screens on convertible tablets that allow for use while typing on the keyboard and in use folded down like a slate, the 5745PG remains only in a standard notebook form.

While we were originally skeptical about how the use of a touchscreen would hold up to use in this type of device, after a month of use we have found that there are definitely a few places where a touchscreen on a notebook is useful.

Acer Aspire 5745PG First Impressions and Hands on Video
Who is this Notebook For?

The Acer Aspire 5745PG is a powerful notebook that will handle the needs of most home users, even those who need to edit a lot of HD video and want to play modern games will find themselves well equipped with this notebook. The 5745PG is a good fit for home users and students who want a lot of power and the addition of a touchscreen makes it ideal for people who want to use their notebook in the car or on the couch.

From a design standpoint the 5745PG looks good, it has an almost pinstriped lid that is visible but understated enough that you can appreciate it without feeling like you’re wearing an Ed Hardy shirt. The downside is that the cover is glossy and will attract fingerprints faster than your iPhone’s screen. The rest of the device also has a nice look to it with a few accents here and there, but nothing ostentatious.

As far as the build of the notebook goes it does feel very sturdy. The 5745PG has sturdy hinges, which are very nice considering that you will be putting more pressure on the touch screen than on a screen on a standard notebook. The overall build quality also felt good with little flex when pressure was applied to the sides of the chassis or with heavy pressure in the center of the device. We did notice that the notebook was a bit uncomfortable to hold on the palmrest area to carry around due to a bit of flex and the weight of the notebook.  More than likely you’ll want to carry this notebook with two hands — so don’t plan on carrying it around and using the touchscreen while standing for extended periods.

The only other item worth noting is that the front end of the notebook is rather light, which when combined with the sturdy hinges, means that you may tip the whole notebook back a bit if you use the touchscreen with too much pressure. It would have actually been nice to see an extended battery that stuck out the back for extra balance — and extra battery life.

The 15.6″ screen on the Acer Aspire AS5745PG stands out from those you’ll find on most because it is a large multi-touch surface, like that you’ll find on a tablet PC. In the past having a touchscreen often meant some sacrifices in quality namely in a visible grain and brightness. That was the case with my last tablet the HP Pavilion TX2000, but unlike that overheating beast the Acer 5745PG is sufficiently bright and doesn’t have a visible coarseness. The only visible notice of a touchscreen comes when you get far to the left or right where, in the right light, you may see some small indication of a digitizer.

Back to the screen, you have a 1366 x 768 resolution which is sufficient for many users and probably more optimized for touch than a higher resolution which power users may want on the large screen. Both viewing angles and brightness are good and while it is glossy you won’t have trouble using it in brightly light indoor settings. Outdoors, you should look elsewhere, but in a car you can make do in most sun conditions with a little bit of adjustment which is nice since we found the passenger seat to be a great place to use touch.

The biggest problem we found with the Acer Aspire 5745PG’s touch screen was that, like all touchscreens, you will get fingerprints on it. It’s not unique to the 5745PG, and easily solved by carrying a nice cleaning cloth, but worth noting.

How is the Touchscreen?

The touchscreen on the 5745PG is very responsive and pretty darn accurate for use with your finger. For most Windows related tasks you will still probably use the mouse, but you can select programs and pull up an on-screen keyboard if you wish to do so. Using the touchscreen in your normal apps works just as if it were a mouse, so you can click pull the side scroll bar in Chrome and scroll through along webpage or switch between tabs without the need to mouse across the screen.

In addition to working right out of the box in many programs, there is a touch optimized portal called Acer TouchPortal which comes with a touch optimized browser and a collection of tools and games. The browser works well allowing you to grab anywhere on the page to scroll instead of requiring you to use the side scroll bar. There is also a homescreen which allows you to leave notes, see a clock and various other tasks which may be useful if you plan to leave this notebook on all the time in a central family location.

When you get into the TouchPortal the touch apps all responded well, but the problem we ran into several times is that the TouchPortal wouldn’t launch or would launch to a black screen, citing an issue with a 3D driver.

When will you use the Touchscreen?

Until I had a chance to use a touchscreen that wasn’t able to fold down to a slate form factor I couldn’t think of where I would use it on a regular basis, but after a month of use it became apparent that there are some settings that make sense for using the touchscreen over the mouse and they are the same places that lend themselves to use with tablets. First off was on the couch while reclining and watching TV. The large screen and smooth control lent themselves to surfing using the screen instead of searching for a mousepad. The second location was in the passenger seat on a long trip when the mousepad was about an inch form my stomach and repeated use would have been annoying. Finally when working in two browser windows with multiple tabs the touch screen made it faster to pop between the multiple tabs than mousing with a mousepad would. If you think you might use it in these situations you will probably find other settings where a touchscreen beats a mouse.

The keyboard on the 5745PG is similar to an island style keyboard, but instead of sitting inside a case it is raised a bit. This is hard to describe, but you can see it in the image below. The design makes for a good typing experience. While the keys could use a bit more space between them, overall it is a good keyboard with enough feedback and little noticeable mushiness.

The mousepad on 5745PG may play second fiddle to the touchscreen, but it is a good mousepad. The mousepad is fairly large and supports gestures leading to a comfortable user experience. I had no issues with sensitivity or palm brushing to move the mouse in my month of use. The mousepad has only one long button which worked well, but I would still prefer two specific buttons as many other users do.

When it comes to power, the 5745PG is well equipped with an Intel Core i5 processor that when combined with the NVIDIA GeForce GT 330M graphics could handle anything we threw at it from HD video editing to a bit of gaming and entertainment. What’s nice is that the user can switch between the powerful NVIDIA graphics and the integrated Intel graphics by pushing a button on the upper right of the device to switch between power and longer battery life.

The biggest thing missing from this notebook is intelligent switching from Optimus which would swap between the graphics processors as needed rather than requiring the user to do it manually.

Despite having stereo speakers that are powered by Dolby Home Theater audio enhancement the sound on the 5745PG is lacking. Lacking is the best word, because while the quality of the sound is pretty good, even with the volume pumped all the way up you can barely hear any sound from the computer. We actually had to check the settings a few times because it was so low.

This notebook ran pretty quiet. Even when the fan kicked on you had to move your ear close to really hear it. As far as heat goes the back left corner near the vent got a little warm on occasion, but it did not get to an uncomfortable level.

The Battery on the 5745PG is rated up to 3 hours and 30 minutes by Acer which is a bit generous. While running in power saving mode we were lucky to achieve 2 hours 30 minutes to 3 hours, and to get to 3 hours we had to be pretty miserly with our power use. This was using the power saving graphics, if you plan to play games or tax the GeForce GPU you should make sure you’re near a power outlet.

The Acer Aspire AS5745PG has a well-rounded amount of ports to offer plenty of connectivity to users.

When the TouchPortal worked it gave access to a touch optimized photo browser, music player, movie app, homescreen, earth app, some games and a browser. The apps were neat for showing off touch, and work well with touch, but most users will still need to stay in the traditional Windows environment to do what they want.

Crapware. This was the most annoying part of reviewing this machine. There were popups for Norton and McAfee which got in the way every time you wanted to hop online and get something done. These are easy enough to uninstall, but that doesn’t mean they need to be set to bug the user until they figure out how to do that.

Even with the issues we found, the Acer Aspire 5745PG-3882 is still a good value offering plenty of computing power for around $900 at Amazon. Keep in mind there is a price premium for having a touchscreen, so if you don’t need or want one you can find similar power for a smaller price.

In all we were surprised by how useful the touchscreen was in this package and while there is no intelligent switching for graphics we still remain impressed with the overall package. Given the overall build quality and decent keyboard it is worth checking out for users who want a touch screen on their notebook, so long as you don’t mind connecting to external speakers. 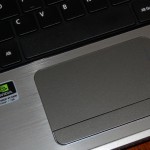 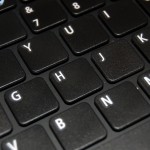 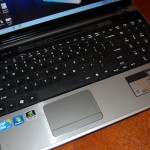 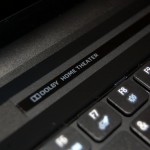 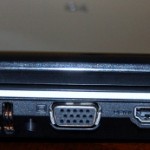 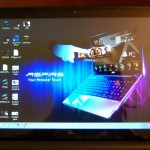 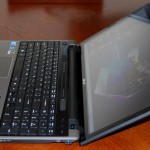 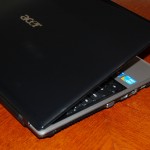 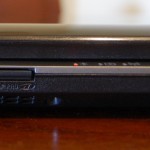