This is a bump over the previous model which maxed out at a Core 2 Duo processor. If you want, you could get an Intel Pentium U5400 ULV processor, which will result in lower performance, but also a lower cost. 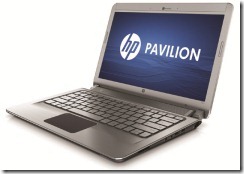 Either way, the 13.3-inch notebook is both very thin and fairly light at just an inch thick and a little over 4 pounds.  The display has a resolution of 1366×768, making it capable of 720P HD video thanks also to the Intel HD onboard graphics. Users can configure the notebook with up to 8GB of DDR3 RAM and up to a 640GB hard drive or up to a 160 solid state drive for faster performance and longer battery life at a higher price. There is also an option external USB DVD writer or Blu-ray combo drive, since there is no built-in optical drive.

One of the coolâ€ new features is something HP is calling CoolSense Technology. They have designed the case of the notebook with vents put in certain spots meant to help move hot air out of the computer efficiently. HP Thermal Assistant technology will automatically determine if the computer is in need of more cooling or more performance. 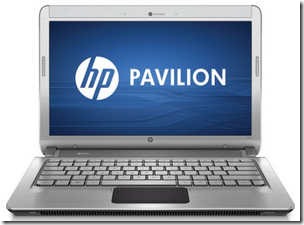 The chiclet style keyboard has an optional backlight for low light typing. There is also a web cam, mic, Altec Lansing speakers with Dolby sound. For connectivity it has 802.11n Wi-fi, Bluetooth, and Gigabit LAN for faster wired networking.

For the road warrior there will be an optional 3G wireless mobile broadband modem with GPS radio. Other specs include 3 USB ports, one of which is also a shared eSATA connection, 5-in-1 media card reader, as well as HDMI and VGA out, all of this in a metal alloy case with resistant soft-touch coatingâ€ on the top of the notebook. It will come with the option of either Windows 7 Home Premium or Professional.

The battery life of the dm3t is promised to be 7.5 hours.

Thanks to the folks at Laptoping for the news of this refresh.