First Look at iOS 4.2 for the iPad from Apple Insider

November is still a ways off, but with the recent release of the iOS 4.2 Beta, Apple Insider has had a chance to go hands on with iOS 4.2 for the iPad and provides a full report on new features, changes, AirPlay, AirPrint and more. There are many new features that users are clamoring for, but there are also some changes that you may not like.

Rather than run over the list of features in iOS 4.2 this is a look at how the features actually handle in the real world, in beta at least.

Multitasking: First off iOS 4.2 brings much needed multitasking to the iPad, allowing users to run apps like Pandora in the background while surfing the web. According tot he brief report on Apple Insider Multitasking functions the same as on the iPhone, with a double press of the home button activating it.

Larger Screen, More Options: When it comes to folders the iPad allows users to add 20 apps to a folder, compared to the iPhone’s 12 apps. Also thanks to the larger screen Apple has allowed iPad users to crank the font size all the way up to 56 which many elderly or users with handicaps will like. According to Apple Insider the font spans Contacts, Mail, Messages and Notes. Notes also gains new font preferences and the ability to choose the default account to link to notes.

Search, Spelling and Location: In the hands on with iOS 4.2 Apple Insider reports that users will now choose which categories are included in Spotlight searches and the order they want them to appear. Users now also have the option of turning spell check on or off as well as plenty of control over location sharing, the use of multiplayer games and more. 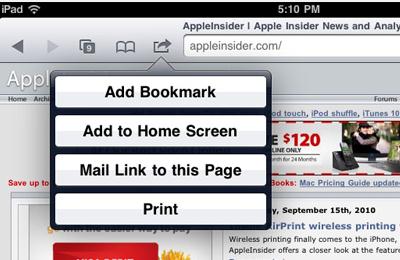 Wireless Printing: AirPrint is one of the features many users have been looking for and according to the hands on the ability to print wirelessly from the iPad is built right into all standard Apple apps. For more about how AirPrint works check out Apple Insider’s First Look at AirPrint on the iPad. Overall it looks like an easy to setup feature.

Changes in Orientation and Brightness Control: One of the unanticipated changes that comes with iOS 4.2 is how the Orientation lock on the side of your iPad works. Apple Insider reports that with iOS 4.2 the orientation lock hard button will become a mute/unmute control and the ability to lock your orientation will move to the iPod Widget which is where you will also find the brightness control.

Jailbroken users already know the value of fast access to brightness control, and will be happy to see easier control; but for many users, like myself, the orientation lock change will be annoying to adjust too. It seems like a change that needn’t be made since you can mute the iPad in under a second by holding the down volume key. Insider doesn’t note any option to revert to the old Orientation lock behavior.

Mail gets Threads and More: The new Mail app for the iPad gains a universal inbox and threaded email conversations which Insider reports makes the Mail application more efficient.

If you still want to know more, look at Engadget’s hands on and the video of iOS 4.2 on the iPad embedded below.

Apple Insider covers the rest of the update in more detail including AirPlay, iAds and more in their first look. The iOS 4.2 update will be available in November and while there are some ways to gain access to iOS 4.2 early — unless you know what you’re doing you should wait for the official update.