With 99% of Facebook users having uploaded at least one photo, there are a lot of people to be tagged. The trouble is, tagging friends and family in Facebook photos takes a considerable amount of time. Facebook has shortened the process by integrating face detection software, courtesy of recently aquired Divvyshot. 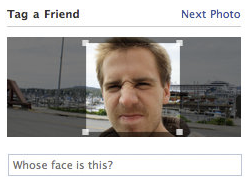 Previously, users would have to upload pictures, click everyone’s face in the picture and type in their name to tag them. Facebook has eliminated one step by finding the faces for you. All you need to do is upload your photos and type in the names.

This still proves to be a tedious process, but at least this feature saves you a little time. Plus, it sounds like this is just the beginning for improvements on Facebook photos, which is one of the top features of Facebook that people use the most. Sam Odio said on The Facebook Blog:

“The tagging feature is just the start of improvements we’re trying out. Stay tuned for future posts about other work on browsing, uploading and tagging.”

If the process gets advanced enough, the entire process of tagging may become automated, providing yet another privacy security issue for Facebook. If you have recommendations on improvements you would like to see come to Facebook Photos, suggest them, here.