Steve Jobs announced the iPhone and one of the many things that people are excited about seeing, myself included, is the display. It is touted as having more pixels than the human eye can individually distinguish. Jobs said that their 326 pixels per inch in the 960×640 resolution display are so dense you won’t be able to see the dots. He claimed that the human eye can only recognize up to 300 pixels per inch. The benefit is that the pixels seem to flow into one another creating a very smooth transition between shades of a color. Sounds great!

However, not everyone is as impressed. One of those casting aspersions Apple’s way is Samsung. Jobs said in his keynote that the iPhone’s IPS display is better than OLED technology. The primary difference is the IPS arranges the liquid crystal cells horizontally. It is complicated but suffice it to say that it takes more battery life, but results in  a much brighter display with a wider viewing angle. However, OLED (Organic Light Emitting Diode) is a technology that has organic compounds that emit light as an electronic current flows through them. The primary benefit is a bright display that requires less

battery life. Both technologies are the future. Samsung makes OLEDs and says they are better, but of course they would. So we might ignore their criticism. If you want to learn more, here is an explanation of the difference. 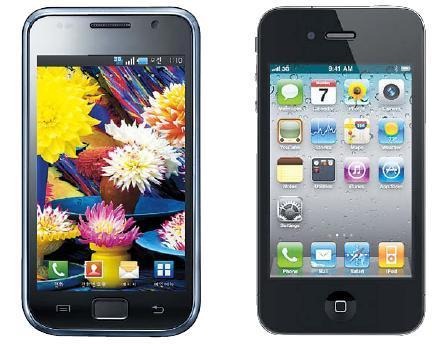 When you actually look at what Samsung says it might have merit. Someone at the Korea Herald spoke to a Samsung spokesperson who said the iPhone 4’s IPS display only offers a 3 to 5 percent gain in sharpness over the OLED displays in their Galaxy S smartphone and takes an extra 30 percent of battery life (see comparison image to the right). Samsung also says that its displays have higher contrast ratios and wider viewing angles.

Samsung’s claims may just be competitive marketing speak, but there is another source also claiming Jobs might be inflating the quality of the new iPhone display. And the source probably does not have the same competitive reasons to criticize Apple. Raymond Soneira is president of DisplayMate, a firm that makes monitor diagnostics. He said Jobs’ statement was not accurate. To make a display’s pixels really indistinguishable to our eyes would require 477 dots per inch, not 300. That means the iPhone falls short by 151 pixels per inch. You’d think he would know.

But wait! There is another voice supporting Jobs’ claims.

Phil Plait worked on calibrating the Hubble space telescope camera and seems to know a thing or two about the subject. He counters Soneira’s statement saying that the 477 figure is only applicable to people who have perfect 20/20 vision, a low percentage of the population. The pixels in the 326 dpi display in the iPhone display may be indistinguishable to most of us who are less than perfect. However, I look at my iPhone with my glasses on and my eye doctor says that with my corrective lenses I have 20/15 vision. That is the purpose of corrective lenses, to correct our vision to make it close to 20/20. So how many pixels would I need to get the effect Jobs is promising?

All of this may be moot. Companies make a lot of wild claims about their products and most of us are smart enough to take them with some skepticism. Buyer beware! The real judgment will come when you get an iPhone 4 in front of you. I was listening to the Engadget Podcast as I wrote this article. They discussed the new iPhone and Joshua Topolsky was at the announcement and got to take a look at the new iPhone. He said, It looks really, really amazing. â€¦ You can’t see pixels on it.â€ (Engadget Podcast #200, May 10, 2010)

I plan on getting one so I’ll update you when I get my hands on it.

See Joshua Topolsky play with the new iPhone below â€¦