iPad App of the Week: DropBox

Moving files on and off the iPad is not a simple task. The official Apple method is to sync them with iTunes is a kludgy mess of ridiculous steps. Steve Jobs likes to brag that Apple is not

always the first to implement certain features in their products but they do them the best. Well Microsoft and other smart phone OS makers have been doing wireless syncing of documents for years and yet you still cannot do it with the iPad or other iOS devices, at least not using Apple’s official means. That is where DropBox comes to the rescue.

DropBox is the file syncing technology that Apple should have included in their OS and the MobileME website. I’ve been saying this since I first discovered DropBox over a month ago. And behind NewsRack it is the most used non-Apple installed app on my iPad. Okay, I probably play Plants v. Zombies more, but don’t tell anyone.

DropBox is not just an iPad app; it is a cloud storage and file syncing service. You install their client software on your computers and it creates a special folder called the DropBox. The default location for this folder is inside your My Documents, at least on the Windows side of things. It is also available for Mac and Linux on a PC and for Blackberry, Android and iOS devices. Once you have it installed, any file you place in your DropBox folder is automatically synced up to their online storage. You get 2GB of free storage and can pay for more. A Pro 50 account is $9.99 per month and the Pro 100 is $19.99 per month. You get 50GB and 100GB respectively.

Below are screenshots from the Linux, Mac and Windows versions in action. 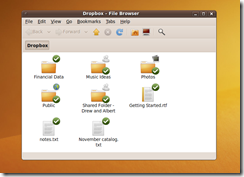 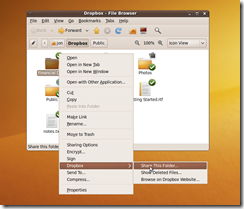 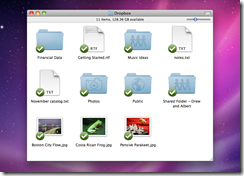 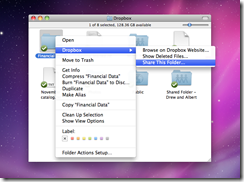 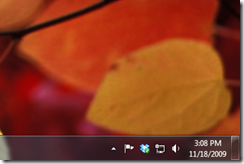 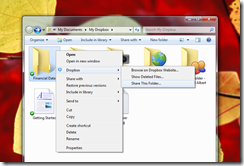 In my experience the syncing is very fast. I have about 1.5GB of files in my DropBox and recently installed the client on a fresh install of Windows 7. I left and returned two hours later and it was finished. I have a fast Internet connection at home, but that is much faster than some other solutions I have tried. When I add a file it is almost instantaneously available to download to my iPad via the iPad app. Also I have experienced very few conflicts in syncing. 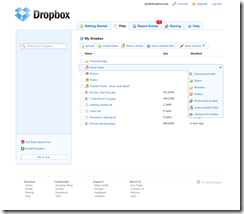 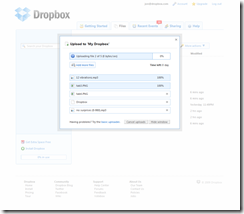 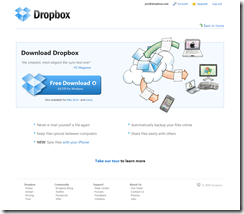 The video below demonstrates how the iPad app works. It is fast, stable, and works as expected 99.9 percent of the time. My primary use case is creating my sermon notes on my PC. I save the file to my DropBox. Then I open the file in the iPad DropBox app and use the Open In feature to open it in Pages. That is where I enlarge the font to make it readable on the iPad while I am speaking in front of my congregation.

Another use is taking screen shots of apps for reviews on my iPad. I add them to DropBox from within the app. This is a great way to get pictures off your iPhone as well. (see above video for a demo of this feature)

I have put all my documents into my DropBox pointing programs like Word, Excel, and PowerPoint to automatically save files to it instead of just having them in the My Documents folder. I also have placed in my DropBox my default Word template (Normal.dot), the custom spelling checking dictionary (custom.dic) and some other program settings files that I want to sync across multiple computers.

One other feature that I do not use much, but is available in DropBox is file sharing. You can share folders or files with others. If you need to access your files from a computer that doesn’t have DropBox on it, you can log into your account and get access to all the files in your DropBox. Also the files are encrypted when transferring them over the Internet.

DropBox is a great app and I recommend it highly. It is available in the App Store for free and on their website for your PC, Blackberry, or Android device.