The Toshiba A505D is one of the recent notebooks to be a part of the AMD VISION program which attempts to simplify notebook shopping by providing 3 categories of computers broken down by what they can do. The Toshiba A505 is an entertainment notebook in the VISION Premium category and is rated for light gaming, video editing and conversion, HD movie watching as well as standard computer tasks like surfing and emailing. With this in mind I made the 16″ Toshiba A505 my main computer for the past month and found that it lived up to the VISION Premium branding on almost all counts. Read on for the full details.

In my earliest days of computing I opted for, searched for, and at times demanded AMD processors in my machines. Sadly the past few years, and a bad experience with the AMD processor in my now dead HP tx2000 had left a bad taste in my mouth so I was excited to have the opportunity to give the AMD Turion II Ultra Dual Core Mobile M620 processor a test drive. Specifically I wanted to see how this stacked up to the several Intel Core i3 or Core i5 notebooks I have used for video watching and editing.

In this review we will look at how this notebook would perform for a college student as well as for a standard home user. This notebook would be a good fit for users who want power, a large screen and a backlit keyboard; but will not be carrying the device with them every time they go to class as it is large and weighs 6.48 pounds.

The Toshiba A505D has a 16″ glossy display with a 1366 x 768 resolution that works great for watching video to working on an office document or surfing the net. The display has a very wide viewing angle indoors and would allow for 3-5 people to watch a DVD on the machine if there was no larger display to hook up to with the included HDMI port. In fact, you can view the screen pretty well when you almost get parallel to the screen.

Since the display is glossy, it does not do well outdoors — but if you are looking directly at it, the display is usable in the sunlight. For users, like me, who like to tilt the display back when using on a couch or in the car; you’ll be glad to know that while it doesn’t recline as much as the Lenovo Edge 13 we looked at earlier this year, the display does recline to a very usable angle.

The Toshiba A505D has an OK keyboard and mouse. If you are going to be typing for extended periods you should look at a keyboard with an island or chiclet keyboard, but for small bursts, a page or so, you should be OK. The keys provide enough stiffness or feedback to be usable; but there isn’t enough spacing for my tastes. What does set the Toshiba A505D’s keyboard apart from the competition is that the keyboard is backlit which makes it ideal for typing in dimly lit rooms; combine this with the overall quiet keys and you have a keyboard that will work out just as well while watching a movie as it will pulling an all-nighter without bothering a roommate.

The trackpad is also OK. It is responsive and the mouse buttons are large enough to be easily found. There is also a button to quickly turn off the trackpad right below the space bar. Ultimately, it would be nice if the trackpad was a bit larger — extending to the edge of the mouse keys — but for most users it will be OK.

We ran the battery through several tests and were ultimately disappointed with the performance; but if you are planning to use this rather large notebook mainly as a desktop replacement you should be OK.

When working on the notebook with the screen on full brightness, we were only able to get TK, and while watching Hurt Locker on DVD the battery only lasted an hour and 15 minutes. There is an Eco Mode, which turns down the screen and modifies a few power options, that provides a slightly better battery life but ultimately you will want to use this notebook while plugged in.

Thanks to the large screen, the A505D is a joy to watch video on. It handled any video we threw at it; YouTube HD, Hulu, DVD, even a 1080P HD video file without stuttering or issues.

For an entertainment notebook, with Harmon/Kardon speakers and a subwoofer, the audio left a bit to be desired in a few situations. The best description I can think of is that when you have it at “10”, you wish you could crank it up to “11”. After some testing I discovered that if I watched the DVD in Windows Media Player instead of the built in Toshiba DVD player the volume was sufficiently loud, this with both software settings maxed out.

For casual or middle of the road graphically demanding systems, the A505D works well. I could play flash games without any trouble and could play Dirt 2 excellently with the graphics set at Medium. When I tried to play Just Cause 2, with the lowest graphics setting, I couldn’t even make it through the first cutscene.

As I mentioned, I was a bit concerned about how the AMD processor would perform and I was pleasantly surprised to find that it was able to handle the gaming, videos and work I wanted to do without slowdowns that I have noticed with AMD powered systems of just a few years back. Another test I ran, was making a movie file using Windows Live Movie Maker and found that the A505D was able to handle video editing; and prepared a 720P video for YouTube in 7 minutes; similar to what I experienced using an Intel Core i3 powered notebook. Granted, this was a short clip, but if that’s the extent of your video editing this notebook can handle it.

The A550D offers a good selection of ports and connectivity options.

The Toshiba A505D lives up to its billing as an entertainment notebook. It can handle any video we threw at it and even light gaming. If you plan to use the built in keyboard for extended periods of typing you may be disappointed with the spacing, but since it is backlit and provides an OK amount of feedback, it is still better than those found on many similarly priced notebooks. In the end, this is a great notebook for college students or home users looking for an entertainment notebook. If you are looking for a notebook to take with you every day and use on-the-go — or are a picky typer — then this notebook is not for you. 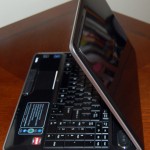 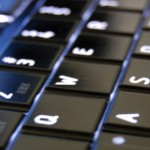 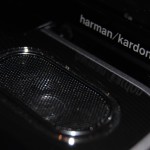 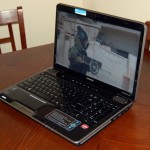 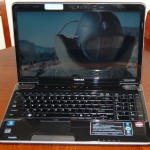 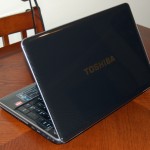 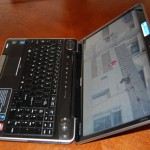