iPhone 4.0 Review: I Was Right that I Was Wrong

Those TV Psychics make tons of predictions, but you never see them go back and rehash them. Well, I’m not that smart. So I want to say it here: I was right!â€ And that is because I predicted accurately that I would probably be wrong about my iPhone OS 4 predictions. Amy Zunk did her mea culpa mixed with crewing too. I think she got more right than I did. So now it’s my turn.

First, here is what I got right. Multitasking is coming, but it is somewhat limited. There will only be seven background servicesâ€ allowed in the new OS. That means that only these kinds of multitasking are allowed. 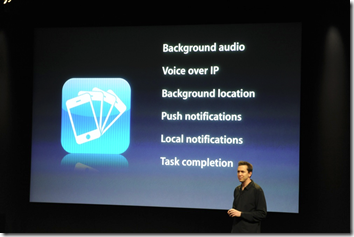 Other things I got right: there is no wireless syncing of files, as I predicted. I have to be honest. I didn’t think this would come because I believe Apple doesn’t get how important this is to users. I hate that I have to tether my devices to a computer to get music, movies, books or now documents (on the iPad) on them. For all its faults Windows Mobile had this built in years ago. There is no excuse for this not being available.

One thing I failed to predict was a unified inbox. I hoped for it, but I didn’t think it was coming for the same reason I didn’t think wireless syncing was coming. Apple is often stubbornly single-minded about certain things. But they did relent on this one and I am glad. So, now the three primary email address I check daily will all be in one place instead of tapping three or four times to switch between them.

Other enhancements that I missed are thread organization and attachments. Also there will be better email encryption.

This category is a mixed bag. I was right when I predicted, there would be no other major hardware changesâ€ like a front facing camera or different buttons. Sadly I was wrong because I did predict some hardware changes namely better Wi-Fi, battery life, and a faster processor. Nothing was mentioned about the hardware. I am still holding out hope on this category since this was an announcement about the OS and not the device itself. Maybe they will still make some changes. But I doubt it! So I guess I get half credit on this one.

No Automatic Syncing of Files or Improved Notification System

I missed on the automatic syncing of files. Currently, Apple requires that you connect your device to the computer to sync. And to get documents in Pages, Numbers or Keynote, you have to manually add them via iTunes.  I hoped the new OS would handle these like it does picture files, which sync a specified folder. Nope!

I said there would be no significant changes to the UI. I did think they would let you put a background on the Home screen, based on the fact that you can do it on the iPad. I was right about that, but wrong about the whole significant thing.â€ Folders are a significant change! 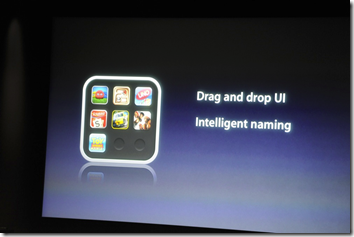 In the new OS you will be able to create folders of apps by dragging on app icon onto another. I plan to put all my Bible apps in one folder and all my games in another. I am sure I will group others and place most if not all of them on the first Home screen.

Not sure how I missed this, but I didn’t even mention it. Yet now that I think about it, it is obvious. iBooks on the iPhone! 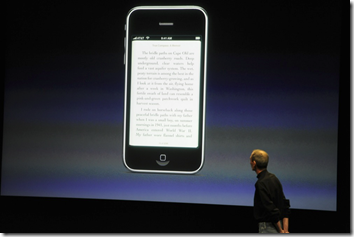 The game center will be like the Xbox Live gaming interface. You will be able to challenge people to game, share scores and other things. I missed this too.

Is there a single non-developer happy that it will be easier to get ads in apps? I heard about this before but probably left it out more as a hope than anything else.