Here starts a series of posts on why I love Evernote, an awesome piece of software that has a near infinite number of uses. I’m going to relay some of the ways that Evernote works great for me as a student attending university. First let’s start with a brief intro about what Evernote is. Here is a short video from the Evernote site:

While I can’t promise that Evernote will turn you into a superhumanâ€, I can tell you that it is mighty handy for keeping your life organized.

There first reason why I love Evernote is the same one that makes it practical for me to use Multi-platform availability.

And if that isn’t enough, Evernote is available as a powerful web-app so that you can access your info from any computer or device with a web-browser, just go to www.evernote.com and sign in!

In addition to multi-platform availability, Evernote’s variable pricing scheme is great. Evernote is completely free to download and use for any of the above platforms. If you are a power-user and really take advantage of Evernote, you may want to upgrade to Evernote premium which has several benefits, but mostly gives you a huge chunk of monthly bandwidth to use with Evernote. Standard (free) users get 40mb/month for note synchronization, and if you are just taking text notes, you’ll probably never even go near this limit. However, if you take a lot of photo/audio notes (which we’ll go into more in another section) you may run up against this limit and desire to upgrade to premium.

I personally use Evernote for Windows across a few computers, and I also use it on my iPhone. Having info synced between these platforms effortlessly is great. I’ve actually run out of battery on my laptop in class on several occasions, and simply pulled out my iPhone and continued to take notes for the rest of the class using the Evernote application. Once I got back to my dorm, everything was synced as I got my computer plugged in and running, all without any effort on my part it’s automatic. 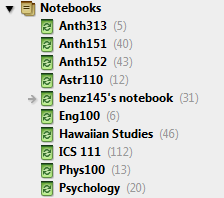 Evernote allows you to easily make virtual notebooks to organize all of your notes and data. Naturally, I have a separate notebook for each one of my classes, and use Evernote on my laptop every day to take notes in each class. My laptop is a tablet PC which means I can write on the screen with digital ink. Evernote is an awesome companion for anyone who uses a tablet PC as it has full support for ink notes which I’ll be sure to talk about in another section of this post series.

Stayed tuned as I delve into some of the truly awesome and useful facets of Evernote in part 2.