Making Windows 7 Your Own: Personalization and Themes

There is more to owning a PC than just having one, whether its a laptop or desktop. With the many generic brands out there to choose from, its not unlikely for you to know someone who has an exact configuration and model as you do. Many PC OEM’s have tried to differentiate their models with different finishes and form factors that make them stand out. Its one of the key aspects of WINTEL machines, there is definitely choice to be found and opportunities to customize. Consumers also have the choice of carrying their computer to an after market customization expert and have them do a custom paint job to add a bit more personality/style to a computer that defines them. Some high-end boutique vendors such as Falcon Northwest bundle that option as a part of their computer models.

What is a Theme?

The personalization story gets much deeper when we enter the world of software and Windows 7 makes the experience even more interesting. Windows has for a long time included theming capabilities, probably as far back as the first version. Microsoft’s first major overhaul of making Windows more customizable was with the release of Windows 95 in 1995 and the companion pack, Microsoft Plus! for Windows 95. This allowed customers to customize their PC experience with additional window themes, icons and sound schemes. Eventually, this was incorporated into Windows 98 and future releases. Windows XP released in 2001 introduced a bold experience called Luna, which featured thicker title bars with three optional colors called Blue, Olive and Silver. Some of the qualities of this theme include, large self explainable icons, rich in color and depth, bright vibrant wallpapers and overall richer palette of colors. Subsequent themes were released outside of Windows XP by Microsoft, such as a ZUNE theme, Royale introduced with the release Windows XP Tablet PC/Media Center 2005. Microsoft also released a companion update to Microsoft Plus! for Windows XP. Consumers described that release as offering little to be worth $39. 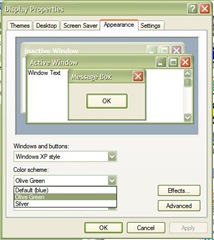 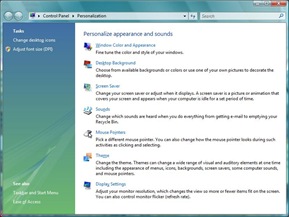 With Windows Vista, Microsoft took another bold step, redesigning the Windows user experience now called AERO. Windows Vista introduced real life effects such as translucent windows, life like icons and a cleaner design that made using Windows daily a pleasure. Microsoft added numerous effects and color schemes for changing the color depth of Glass along with high quality wallpaper backgrounds. Microsoft also used Windows Vista as an opportunity to update the Display Properties dialog creating a new Explorer shell called Personalization. In this new interface, in which elements were categorized into different sections explaining what each does, users clicked a different link which led to a shell or dialog for customizing the Windows interface, whether it was Window color, Desktop background, Glass color, Screen Saver, Sound scheme etc.

Windows 7 improves on this, by enhancing the layout for quicker access to elements, but also adding more options for theming the Windows interface and making Windows connect better with locals. Themes are now bundled packages that feature a collection of high resolution wallpapers and an assigned glass color. Of course, there are some additional changes for users upgrading from versions of Windows such as XP or as far back as Windows 2000 Professional. Lets discuss some more about the different aspects of the Windows 7 Personalization Explorer shell. To access it, right click your desktop, click Personalize. 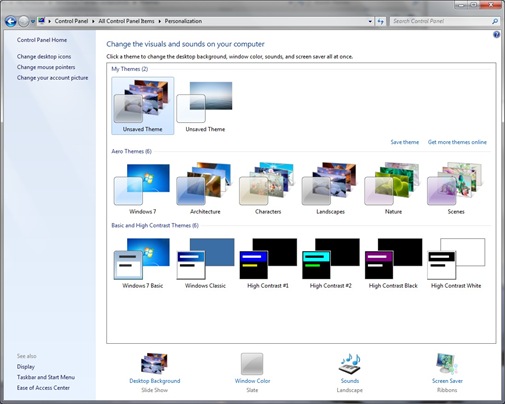 Users should note, Windows 7 offers varied experiences depending on the capabilities of your hardware and the edition of Windows 7 you are using. Lets learn some more about these tier of capabilities:

Windows Aero Standard – Combines some of the capabilities of Windows Aero Glass with some features of Aero Basic. Users will notice that window borders are more glass like in appearance, but do not have the option for translucency. The Taskbar is similar Aero Basic, except for the option of Thumbnail previews is now available.

Windows Aero Glass – What some would call the crÃ¨me de la crÃ¨me, Aero Glass offers the ultimate user experience for Windows users. The Windows Aero Glass encompasses every aspect of the Windows desktop experience: Start menu, Desktop, Taskbar and Windows Explorer. The immediate differences users will note is the ability to have translucent glass windows and a Taskbar with powerful effects such as interactive thumbnail previews, ability to see running videos with the ability to hover them and see a full size preview. If you invoke the Alt+Tab command, you can also see a live preview of windows on the fly. Users can also customize the color of the windows with up 16 different colors to choose with the option of controlling the intensity of the window color itself.

In addition to these themes, Microsoft also provides different that are grouped as Basic and High Contrast themes.

Windows Aero Basic – For computers that cannot support the minimum graphics requirements of Windows Aero Glass. Aero Basic features the standard elements of the Windows 7 interface except for the translucent effects and animations. Instead, areas such as the Taskbar, window borders display a blue/grayish color scheme. Other unavailable features include the inability to choose a Window Color, see and interact with thumbnail previews, Alt-Tab Preview, Flip 3D and Aero Peek.

Windows Classic – First introduced with Windows 95, this experience was the flagship theme for Windows for many years and was replaced by Windows XP’s Luna in 2001 but is still included in Windows for persons who are not quite ready for the changes in Windows 7. Microsoft has made some changes to Windows Classic in Windows 7 where menus are concerned. The standard look and feel still exist, but Microsoft has decided to remove the Standard Classic Menu that was available as an option in both Windows XP and Vista. Personally, I agree with this, since the new Start menu offers so many benefits such as Instant Search, easier access to programs, better control (no cascading/off screen sub menus), ability to search HomeGroups, Public directories and detailed results when presented. The new Start menu also introduces support for features unique to Windows 7 such as Jump List providing access to task and recently accessed files associated with a program.

High Contrast themes – If you have difficulty reading or viewing your screen, Windows has for years included high-contrast color schemes that heightens the color contrast of some text and images on your computer, making those items more distinct and easier to identify.

System Requirements – To run Windows Aero Glass, you need appropriate hardware. The capabilities will vary depending on what you have installed, here is a list of suggested requirements from Microsoft:

How do I personalize Windows 7?

Aero Background – You can easily turn your desktop into a slideshow of your favorite photos. 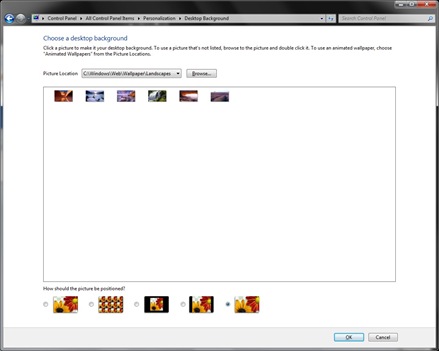 Glass Color – You can make your windows look the way you like with your favorite color. Windows 7 Color and Appearance now includes a total of 16 different colors to choose from. 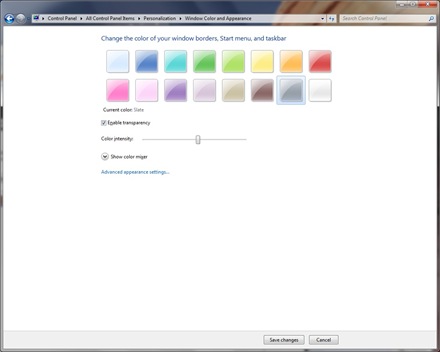 Choose the color you want. You also have the option of controlling the intensity of the color by using the Color Intensity slider. The transparency effects can optionally be turned off.

Windows 7 bundles a set of 6 pre-packed themes for you to get started with, these include the default branded Windows 7 themes: Architecture, Characters, Landscapes, Nature and Scenes. The Windows Team went the extra mile with Windows 7 where themes and local cultures are related. Windows 7 offers themes tailored to different regions and languages, with special wallpapers, sounds and Aero Glass colors to provide a more locally relevant experience. 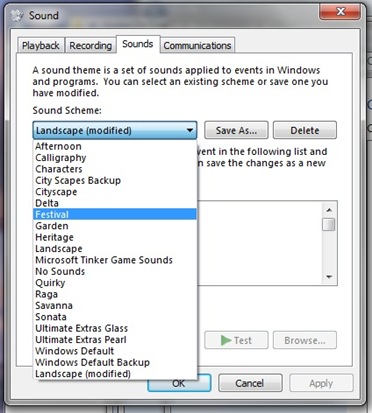 The Sounds Area of Personalization includes a collection of 13 new sound schemes that are also related to the new Windows 7 bundled themes.

Windows 7 does not stop at what comes bundled on the installation disk, users can create their own Slide show themes and download additional ones from Microsoft’s Windows 7 website here Simply click a theme to Download and it will install your chosen theme. If you want to create your own theme and save it, learn more in the following Notebooks.com article here 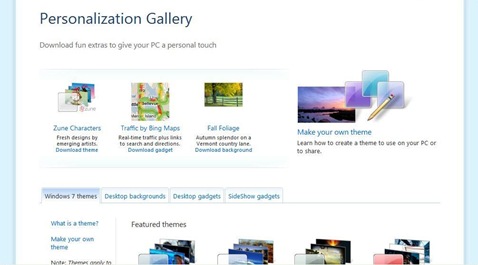 Themes are a great way to have fun with your PC and make it represent you and your experiences. Of course, you are not limited by what Microsoft provides, third party solutions are also available for you to customize the Windows interface to an even greater degree. StarDock Object Desktop which is partly responsible for the now defunct Windows Dreamscene once available to Windows Vista provides artistic themed interfaces for Windows, allowing you to change up your Windows experience as much as you like. You can learn more here So, don’t be afraid to have fun with Windows 7 and change it up the way you like, as Microsoft says After all, it’s yours.

Using the improved Taskbar and Start menu in Windows 7

A Guided Tour of Windows 7 for new users