Apple’s updated the MacBook to add a few features previously reserved for the MacBook Pro. The new white MacBook has a uni-body enclosure with a built-in battery that lasts up to seven hours, a multi-touch trackpad and an LED backlit display.

The new 13.3″ MacBook is available today through Apple.com and authorized resellers.

As you can see in these photos, Apple’s new MacBook is basically a plastic version of the popular MacBook Pro line. The edges are now rounded and the bottom of the notebook is incredibly clean. 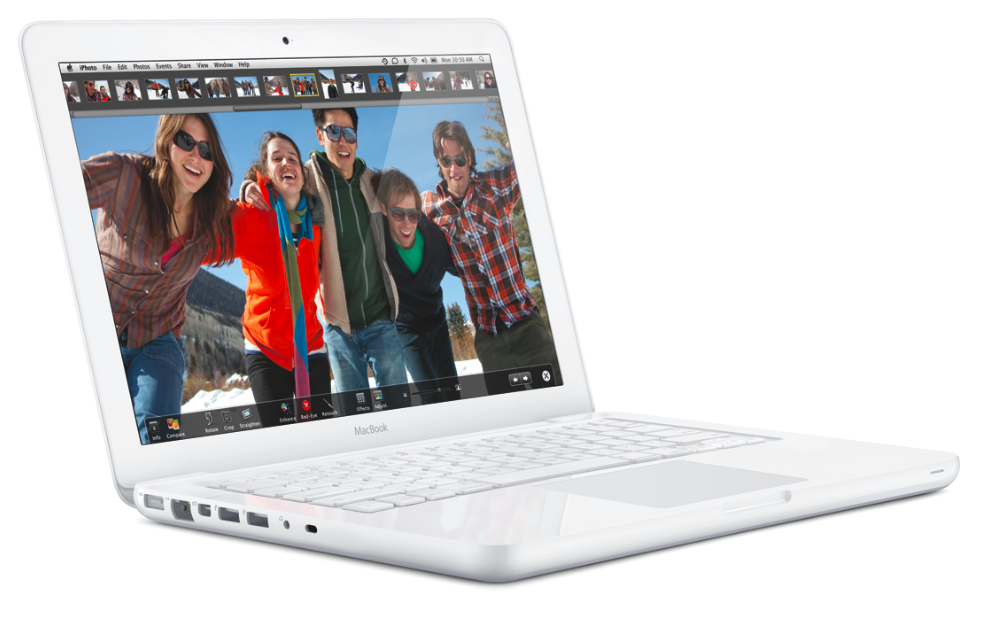 At $999 its the most affordable notebook Apple offers. The standard configuration includes a 2.26GHz Intel Core 2 Duo processor, 2GB of memory, a 250GB hard drive, DVD burner and NVIDIA 9400M graphics. The trackpad is made of glass, just like the one found on the 13.3″ MacBook Pro. Apple customers can upgrade to a 250GB or 320GB hard drive and 4GB of memory at Apple.com. 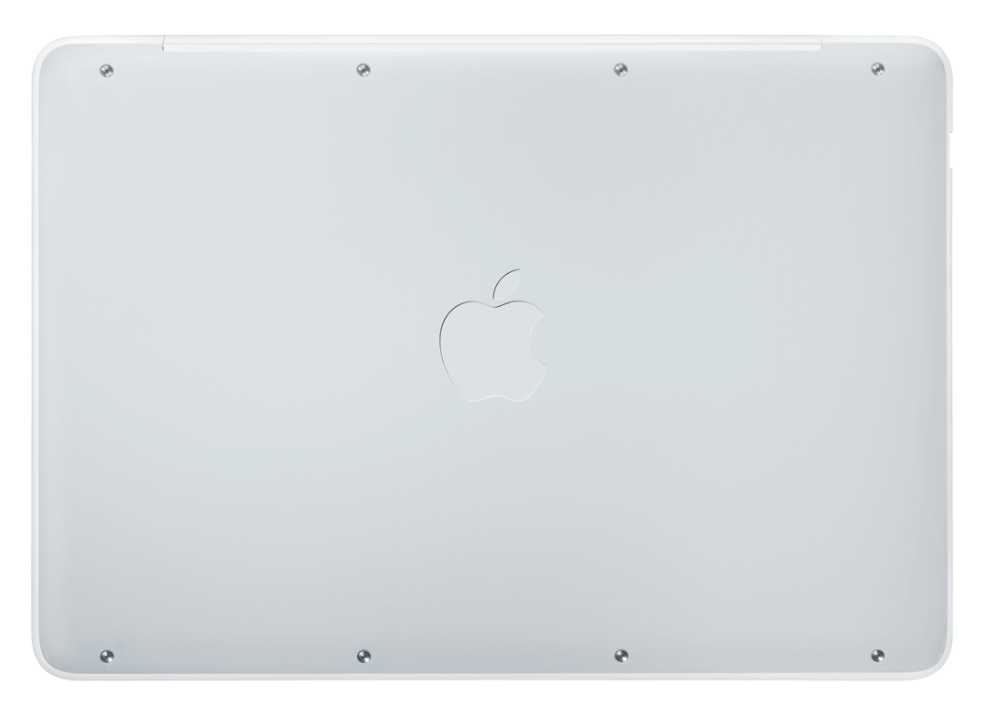 The new battery is not user replaceable. Apple claims it will maintain 80% of its original capacity for up to 1,000 charges. Users can have a new battery installed for $129, which includes parts and labor. I personally prefer having the option to swap batteries at will, but relatively few people actually carry a spare. 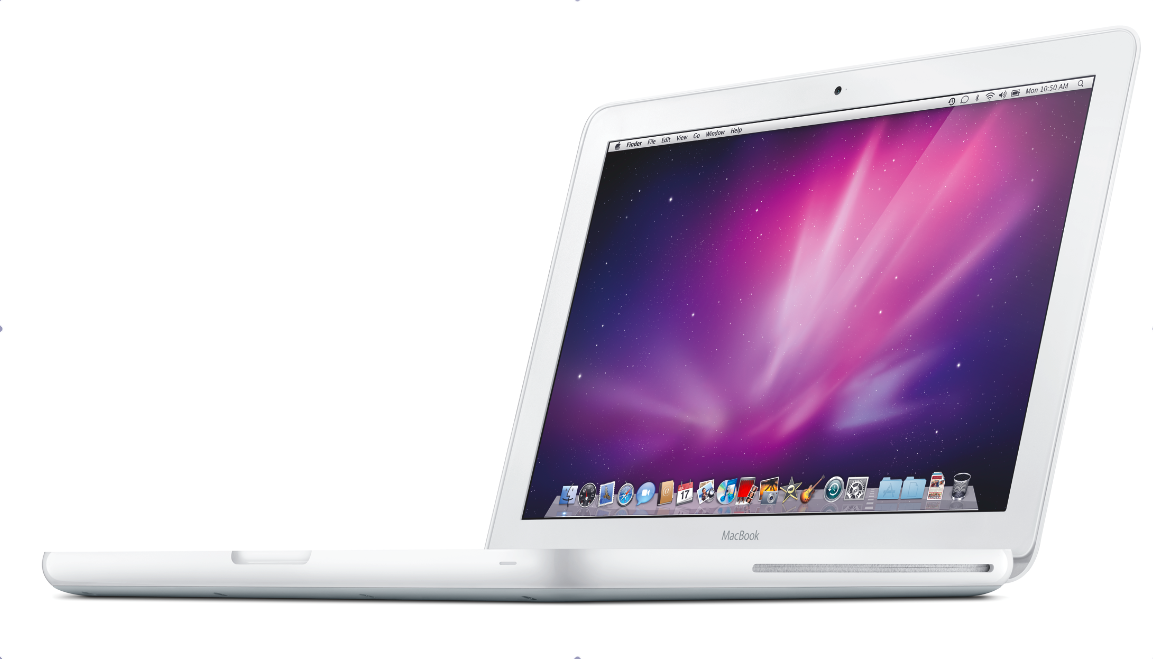 CUPERTINO, Calif., Oct. 20 /PRNewswire-FirstCall/ — Apple® today updated its popular MacBook® with a new, durable polycarbonate unibody design featuring a brilliant LED-backlit display, a glass Multi-Touch(TM) trackpad and Apple’s innovative built-in battery for up to seven hours of battery life. Inheriting technology and design features from the MacBook Pro line, the new MacBook is an ideal consumer notebook for students and new Mac® users, and is available for $999.

“The new MacBook includes many of the great features found on the innovative MacBook Pro, such as an LED-backlit display, glass Multi-Touch trackpad and built-in long-life battery,” said Philip Schiller, Apple’s senior vice president of Worldwide Product Marketing. “With the only lineup of notebooks all featuring unibody enclosures, LED-backlit displays and long-life battery technology, there’s never been a better time to switch to a Mac.”

The new MacBook includes Apple’s innovative built-in notebook battery for up to seven hours of wireless productivity on a single charge, and up to 1,000 recharges.* At nearly three times the lifespan of conventional notebook batteries, Apple’s built-in battery results in fewer depleted batteries and less waste. Depleted batteries can be replaced for $129, which includes installation and environmentally responsible disposal of your old battery.

The energy-efficient MacBook joins the industry’s greenest lineup of notebooks, with every Mac notebook achieving EPEAT Gold** status and meeting Energy Star 5.0 requirements. The entire Mac notebook line now comes standard with energy efficient LED-backlit displays that are mercury-free and made with arsenic-free glass. Mac notebooks contain no brominated flame retardants, use internal cables and components that are PVC-free and are constructed of recyclable materials.

Every Mac comes with Mac OS® X Snow Leopard®, the world’s most advanced operating system, and iLife®, Apple’s innovative suite of applications for managing photos, making movies and creating and learning to play music. Snow Leopard builds on a decade of OS X innovation and success with hundreds of refinements, new core technologies and out of the box support for Microsoft Exchange. iLife features iPhoto®, to easily organize and manage photos; iMovie® with powerful easy-to-use new features such as Precision Editor, video stabilization and advanced drag and drop; and GarageBand® which introduces a whole new way to help you learn to play piano and guitar.

The new MacBook, for a suggested retail price of $999 (US), includes: