Which Should You Buy: Apple iPad Pro vs MacBook

With the introduction of Apple’s latest device, the super-sized Apple iPad Pro, there have been countless comparisons with the Microsoft Surface, the Redmond giant’s own superpowered tablet. But what about Apple’s other ultralight device, the 12-inch Retina MacBook? We take a look at the pros and cons of both devices to help you figure out which one is right for you.

Before you decide which one fits into your life better, you need to figure out what you really need from your technology. What tasks do you spend your days doing? Do you spend most of the time banging out thousands of words on the keyboard, or do you tend to use the mouse (or touchscreen, if you happen to have one of those on hand)? Each of those workflows lends itself to a different kind of device.

Before we dig into what really sets the iPad Pro apart from the MacBook Retina, let’s take a look at their physical dimensions. 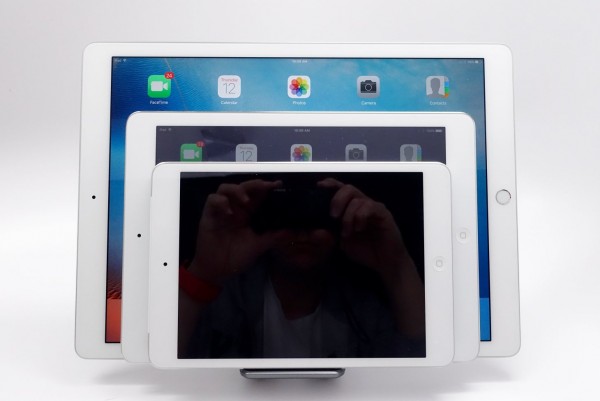 You might be surprised to learn the iPad Pro is actually bigger than the 12-inch MacBook.

The iPad Pro has a 12.9-inch, 4:3 display, while the MacBook has a 12-inch, 16:10 display. Although the aspect ratios are different, the screen on the iPad Pro is a bit larger than the one on the MacBook – which is great for reading and writing content, but worse for watching video because of the squarer display. In landscape orientation, the iPad Pro is 12 inches wide, 8.68 inches high, and 0.27 inches thick. By contrast, the MacBook is 11.04 inches wide, 7.74 inches high, and up to 0.52 inches thick at its thickest point. The iPad weighs 1.57 pounds, while the MacBook weighs 2.03 pounds.

Read: iPad Pro Review, or Why I Returned the New iPad

In other words, it’s a wash: the two devices are so similar that choosing one over the other (especially when you consider that the iPad will be just as, if not heavier than the MacBook, if you require a keyboard). So if you are looking for a super portable device to take everywhere you go, either one will fit the bill.

The MacBook is a better device if you spend your days on the keyboard. 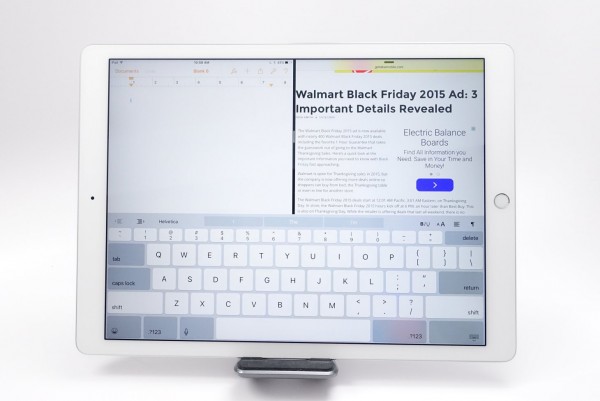 Still, the MacBook is simply a better device if you’re going to be typing hundreds of words or more per day. It’s quicker to setup and start typing, and the laptop form factor makes it easier to use on your lap, or in a car. Additionally, manipulating text is a pain using a touchscreen. While pairing with a physical keyboard helps, it’s nothing compared to how quickly you can navigate a document and manipulate text with the Apple MacBook’s multitouch trackpad.

If you only require a keyboard for occasional use, however, the iPad Pro works very well.

The iPad wins out in many, but not all, design applications.

Perhaps unsurprisingly, the iPad Pro is a stunning device for artists and graphic designers. If you can get your hands on one of the hard-t0-find Apple Pencils, you have a device that works as well as the generally more expensive Wacom tablets, and much better than the drawing tablets that don’t have built-in displays.

Read: How to Edit Photos on the iPad Pro

Unfortunately, some workflows aren’t quite so hot on the iPad. There are a few 3D modeling apps, for example, but nothing that begins to approach the capabilities of apps on the desktop – which brings to mind another criticism: the iPad Pro is still so new that some really useful apps haven’t been developed or updated to support it just yet. That will come in time, but the MacBook already works with any app that supports modern OS X.

You can get around some of these limitations by using the iPad in conjunction with a MacBook, iMac, or Mac Pro – but that sort of defeats the purpose of trying to shed unnecessary weight.

Also, if you’re one of the millions who depend on Adobe’s powerful Creative Cloud apps, you’re only going to find the full-blown versions of them on OS X. The company has worked to make some pretty capable mobile apps that work in conjunction with the desktop software, but that only works if you buy both devices – if you need Photoshop, and can only buy a single product, the iPad Pro may not be for you.

A MacBook stomps the iPad Pro when it comes to storage space.

An iPad Pro can be purchased with either 32GB or 128GB of storage space – if the literal only reason you want to buy an iPad Pro is the larger screen, 32GB is fine; otherwise, you’ll want to spring for the upgrade. Meanwhile, the 12-inch MacBook starts out at 256GB and can be upgraded even further. While it lacks the SD cart slot found on Apple’s 13-inch and larger MacBooks, it does have a USB-C port that can add even more storage. 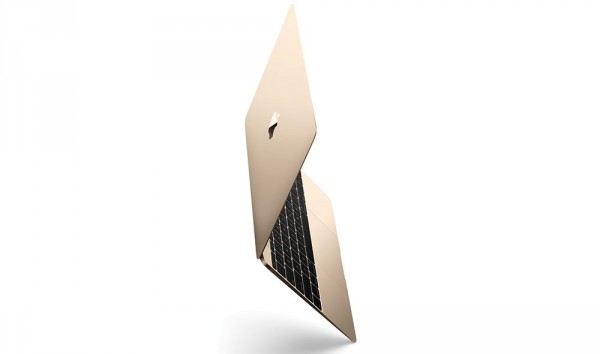 The iPad storage can’t be expanded easily at all, leaving you to rely mostly on wireless transfers and the cloud for getting data on and off of the device. For many apps – drawing, text documents, PowerPoint presentations and the like – that’s not at all a problem. If you plan on putting a bunch of movies on it, or editing 4K video or a lot of photos, then it can become a real drag. While some users have discovered that the iPad Pro has a USB 3.0 chipset inside, it can’t even take advantage of those speeds yet – so if you decide to hook it up to another computer, you’ll be sitting there for a while as things get transferred.

Which device is more powerful, the iPad Pro, or the 12-inch MacBook?

Another surprise: the iPad Pro and the Apple MacBook are neck-and-neck when it comes to computational prowess. The Apple CPU inside of the iPad Pro is one of the fastest mobile chips available, while the Intel CPU inside of the Retina MacBook is one of the most power efficient laptop chips to date – the result is that they’re actually pretty similar in terms of capability. You’ll find that the iPad Pro wins out over most tasks compared to the base model MacBook, while the upgraded MacBook models regain the upper hand.

At the same time, the iPad is a much better device for playing games on. That’s mostly because iOS is filled with games that are designed to take advantage of the low powered chips and graphics found inside of more traditional phones and tablets, while trying to run PC games on the MacBook can be frustrating (unless you want to limit yourself to much older games and emulators).

The iPad Pro has powerful multitasking capabilities, but the MacBook’s are leagues better.

If you’re the type of person who has three or more windows on the go at any given time, you might chafe a little (okay, a lot) at the restrictions imposed by iOS. Apple has implemented side-by-side multitasking pretty well for a mobile device, but considering that it’s a fundamental feature for OS X, the iPad doesn’t come close to the MacBook. 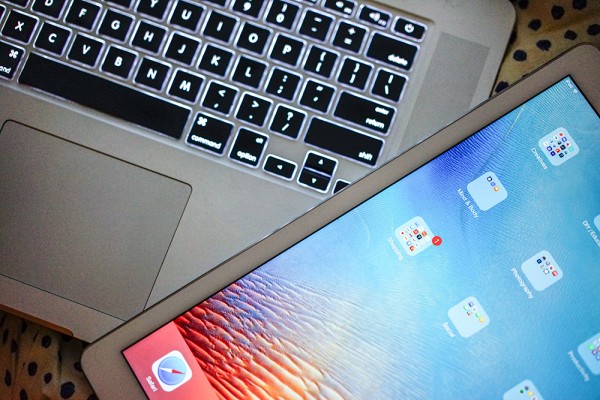 While the MacBook’s small screen means it’s unlikely you’ll be throwing too many applications around simultaneously, the use of virtual desktops in OS X (Apple calls them “Spaces”) means that you can rapidly and easily swap between different screens full of applications to check on your progress. Trying to do the same thing on the iPad can be an exercise in frustration, as you have no control over what apps appear on the list for split screen.

Which costs more, an iPad Pro, or a Retina MacBook?

Read: 5 Ways the iPad Pro Will Change How I Work

The two devices are more similar than they are different.

If you’re still having a hard time figuring out which is right for you in the iPad Pro vs MacBook battle, you’re not alone. Thanks to the constraints imposed by their form factors and lower powered components (compared to more expensive laptops and desktops, that is), you’ll find that the two are more alike than not.

Still, we can draw some pretty broad conclusions to summarize. Spend your days typing? Buy a MacBook. Itching to draw? Go with the iPad Pro. Storing big files? Pick up the Retina MacBook. Want a device to relax with at the end of the day? The iPad Pro is a better choice. Want to watch a lot of movies in your downtime? The MacBook’s 16:10 screen ratio makes it a nicer experience for watching movies (though the iPad Pro does have excellent speakers). Prefer to play a few games here and there? The iPad Pro – despite the name – has your back, as long as you’re not lusting after Fallout 4.

In an ideal world, you could go and buy both devices. They’re sufficiently lightweight that you can pack both in your bag and only just hit the same weight as a single 13-inch MacBook Pro. If you need a keyboard, pull out the MacBook; the rest of the time, use the iPad (maybe the best, albeit really expensive, keyboard for the iPad Pro is a 12-inch MacBook).

The best advice we can give is to go try each one out in an Apple Retail Store or Best Buy before you pull out the credit card. Given how many compromises were made to bring each device to market, you’re liable to find aspects about each one that frustrate you. And don’t be afraid to take advantage of Apple’s liberal return policy: you can purchase one or both devices and return them within two weeks for a full refund, no questions asked.