Two Thirds of Mac Users Willing to Give Windows 7 a Try!

That’s right; in a recent survey by Retrevo, a consumer electronics shopping site, 67% percent of Mac users would take Windows 7 for a spin if it was free! Before Steve Jobs has a heart attack or Balmer starts sweating up a storm with his victory dance; take note that 97% of Mac owners surveyed said that they wouldn’t even think about switching back to Windows full time.

But just because Windows 7 won’t win back many Mac users doesn’t mean it hasn’t caught the attention of PC users in a big way. 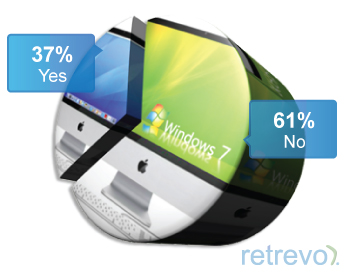 The Retrevo survey provided some additional insight into how consumers are approaching Windows 7.

According to estimates by Retrevo even a 12% upgrade rate on old computers would equate to 188 million copies of Window s7 sold which will, “represent a small windfall for Microsoft.”

Personally, it’s no surprise that many users, including Mac owners, are willing to give Windows 7 a try. Thanks to plenty of usability enhancements and promising performance even on older computers Windows 7 is a relatively cheap way to upgrade your computer.

If you’re looking for a new gadget or just to find the manual for one you already have Retrevo is a great place to start. They have links to digital copies of numerous manuals and provide a product lifecycle chart which helps you make smarter gadget purchases, especially if you shop on the clearance rack. For more info and a look at the Retrevo Value Map, check out my review on WalletPop.