There comes a time in every gadgets life when its ball drops and a more mature model comes to market. Never has this been truer than with the Blackberry Curve 8520 which is now available on T-Mobile. The new Curve looks similar to the other phones in the Curve lineup and shares many of the same features but its optical trackpad is what makes it stand out and say, “Look at me.”

By ditching the traditional rollerball for a smooth trackpad and throwing in a 2G radio RIM was able to create a very functional phone at an attractive price point; $50 at Walmart with a 2 year agreement. 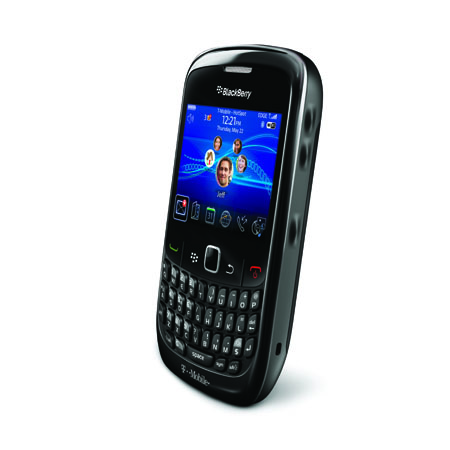 Optical pad: It works really well. I was leery about it at first due to some erratic behavior but after learning how much pressure to put on it navigation was smooth. I found that the trackpad worked best when I applied a mild amount of pressure to it as opposed to bearing down full force when navigating. The only real issue I had with the trackpad is that if your fingertip gets wet or sweaty the trackpad will show a little resistance; unless you will be using this in a very humid climate or have a gland problem you should be fine. I found that swapping hands or wiping my finger on my pants cleared the issue up.

Keyboard: The keys could have a bit more space but they have a good tactile response and audible confirmation. Speaking of audible confirmation; it’s possible that if you use this in the bedroom at night your spouse will smother you with a pillow. Overall I found the typing experience easy to pick up on, in fact I wrote 90% of this review in EverNote right on the Blackberry.

Body: RIM made good use of the small form factor of the Curve providing a compact phone that feels like it’s been crafted to rest on your pointer and middle fingers while your thumbs dance across the tic-tac size keys. The smooth back gives way to a rubberized border that wraps the phone providing an easy surface to grip. The top of the phone offers easy access to media keys including a handy mute/standby key. Sides of the phone feature a camera button, volume buttons and a voice dialing button. The small size lets it easily blend into a shirt pocket or slip into slacks without the common Smartphone bulge.

Radio: Unfortunately one of the reasons that you can get the 8520 for a song is because it doesn’t have a highspeed 3G radio in it like most other phones on the market. This downside is partially negated by the fact that T-Mobile’s 3G rollout still lags behind its competitors. Still, the included WiFi and the ability of the BlackBerry OS to seamlessly switch between connections will make up for the lack of 3G in many locations. As a data junkie, I’m a bit ashamed to admit that there were only a handful of times I found myself without WiFi and missing a 3G connection.

One major upside to the inclusion of WiFi on the Curve 8520 is that when you connect to a hotspot you are able to make calls over UMA. This still uses your minutes but it gives you a signal in many places that T-Mobile (and sometimes other carriers) can’t reach.

In my experience call quality over UMA varied between acceptable (a tinny connection) to excellent (landline quality). Unfortunately I wasn’t able to determine what caused the fluctuations in quality.

Camera: The 2MP camera on the Blackberry Curve left me pleasantly surprised. In daylight conditions it took decent snapshots like the one above and when I took it to the local hot air balloon festival it performed well enough for keeping my Twitter followers up to date and even took decent enough video of the balloons glowing at dusk.

Screen: While some reviews took issue with the screen on the 8520, I found it to be a pleasure to use even in bright outdoor conditions where many screens falter. One issue I did find was that despite my tweaking the backlight settings, when I used the Automatically Dim Backlightâ€ option to conserve battery life I found the backlight had a mind of its own; dimming and brightening during a period of extended use without any apparent reason.

Battery: During my week long review of the 8520 I made it my daily driver; subjecting it to near constant Twittering, emailing and podcast listening. Even on days of heavy use where I found myself stuck in a 3.5 hour meeting or as a passenger on a 4 hour roundtrip road trip I was able to get 2 days of life out of one charge. If you make a lot of voice calls, rather than focusing on data like I did, you may get less battery life but you should be able to get through most days.