Apple announced a redesigned 17-inch MacBook Pro at MacWorld, featuring its relatively new unibody design that’s used in the rest of the Apple notebook lineup. The base configuration comes with 4GB of RAM, a 320GB hard drive, NVIDIA 9400M and 9600M graphics.

The 17-inch MacBook Pro It is available now for pre-order from $2,799 and will hit store shelves in a few weeks.

The all aluminum unibody design is sturdy and looks great. It weighs just 6.6 pounds and is thin for a 17-inch notebook. 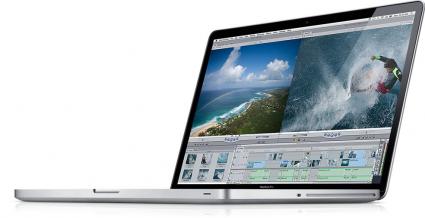 The 17-inch MacBook Pro has an anti-glare display option, which is a must-have for many digital content creators. Apple should consider adding this option to the MacBook and 15-inch MacBook Pro.

Unfortunately, the new MacBook Pro does not have a removable battery. Apple claims the fixed battery will last for up to eight hours on a single charge and is good for up to 1,000 cycles. This is a big mistake on Apple’s part. Digital content creators, whom this product is intended for, use power-hungry applications such as Final Cut Pro. The 15-inch MacBook Pro takes an incredibly long time to recharge and if the 17-incher has similar circuitry users will have to wait 4+ hours to recharge their one and only battery.

SAN FRANCISCOâ€”January 6, 2009â€”Apple® today unveiled the new 17-inch MacBook® Pro featuring a durable and beautiful precision aluminum unibody enclosure, and a revolutionary new built-in battery that delivers up to eight hours of use and up to 1,000 recharges for more than three times the lifespan of conventional notebook batteries. The new 17-inch MacBook Pro has a high resolution LED-backlit display and the same large glass Multi-Touchâ„¢ trackpad introduced with the new MacBook family in October. In addition, the new 17-inch MacBook Pro includes state of the art NVIDIA graphics and the latest generation Intel Core 2 Duo mobile processors. As part of the industry’s greenest notebook family, the new 17-inch MacBook Pro is made of highly recyclable materials, meets stringent energy efficiency standards and is made without many of the harmful toxins found in other computers.

We’ve developed new battery technology that is better for the user and better for the environment,â€ said Steve Jobs, Apple’s CEO. Apple’s advanced chemistry and innovative technology deliver up to eight hours of use on a full charge cycle and up to 1,000 recharges.â€

Apple uses advanced chemistry, intelligent monitoring of the system and battery, and Adaptive Charging technology to create a revolutionary new notebook battery that delivers up to eight hours of wireless productivity on a single charge and up to 1,000 recharges without adding thickness, weight or cost to the MacBook Pro’s incredible design.* The longer battery lifespan equals fewer depleted batteries and less waste, which is better for the environment.

Measuring just 0.98-inches thin and weighing 6.6 pounds, the 17-inch MacBook Pro is the world’s thinnest and lightest 17-inch notebook. The 17-inch MacBook Pro is the most powerful Mac® notebook yet with the latest Intel Core 2 Duo processors available up to 2.93 GHz, up to 8GB DDR3 main memory and a graphics architecture that allows users to switch between the NVIDIA GeForce 9400M integrated graphics processor for better battery life and the powerful NVIDIA GeForce 9600M GT discrete graphics processor for higher performance. The new 17-inch MacBook Pro includes a 320GB 5400 rpm hard drive standard with a 320GB 7200 rpm hard drive and 128GB and 256GB solid state drives as options. As with the rest of the new MacBook family, the 17-inch MacBook Pro includes a next generation, industry-standard Mini DisplayPort to connect with the new Apple LED Cinema Display featuring a 24-inch LED-backlit widescreen display with a built-in iSight® video camera, mic and speakers.

The new 17-inch MacBook Pro joins the aluminum unibody MacBook family in setting new standards for environmentally friendly notebooks with every model achieving EPEAT Gold status.** Each MacBook unibody enclosure is made of highly recyclable aluminum and comes standard with energy efficient LED-backlit displays that are mercury-free and made with arsenic-free glass. The new MacBook family meets stringent Energy Star 4.0 requirements, contains no brominated flame retardants and uses internal cables and components that are PVC-free. The battery in the new 17-inch MacBook Pro provides additional environmental benefit because its extended lifespan means fewer depleted batteries resulting in less waste. Depleted batteries can be replaced for $179 which includes installation and disposal of your old battery in an environmentally responsible manner.

The new 17-inch MacBook Pro will be shipping at the end of January and will be available through the Apple Store® (www.apple.com), Apple’s retail stores and Apple Authorized Resellers for a suggested retail price of $2,799 (US), and includes:

*A properly maintained Apple 17-inch MacBook Pro battery is designed to retain 80 percent or more of its original capacity during a lifespan of up to 1,000 recharge cycles. Battery life and charge cycles vary by use and settings. For more information visit www.apple.com/macbookpro/17inch-battery.

**EPEAT is an independent organization that helps customers compare the environmental performance of notebooks and desktops. Products meeting all of the 23 required criteria and at least 75 percent of the optional criteria are recognized as EPEAT Gold products. The EPEAT program was conceived by the US EPA and is based on IEEE 1680 standard for Environmental Assessment of Personal Computer Products. For more information visit www.epeat.net.

Apple ignited the personal computer revolution in the 1970s with the Apple II and reinvented the personal computer in the 1980s with the Macintosh. Today, Apple continues to lead the industry in innovation with its award-winning computers, OS X operating system and iLife and professional applications. Apple is also spearheading the digital media revolution with its iPod portable music and video players and iTunes online store, and has entered the mobile phone market with its revolutionary iPhone.