Best Buy will offer the HP G50-104NR as a Black Friday doorbuster for $349.99. There will be extremely limited quantities and it will be available only at physical Best Buy stores. The Black Friday G50 104NR includes a Canon all-in-one printer.

This bundle has a retail value of $849.98, which means you’re saving $500 if you’re willing to brave the Black Friday crowds and are lucky enough to get one of Best Buy’s tickets for this item. 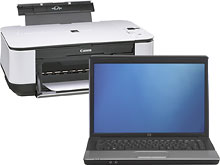 The printer included in this bundle is the Canon Pixma MP240, which can scan, copy and print documents and photos.

The HP G50-104NR isn’t a very robust notebook, but you can’t beat this deal this Black Friday.

Thank you for visiting Notebooks.com for your Black Friday info. Please be sure to check out our holiday giveaways, including the $300,000 HP Magic giveaway where 50 blog readers will win three HP notebooks, an HP TouchSmart Desktop and several accessories . We’re also giving away 20 Seagate Hard Drives. You’ll also get to discover some great Web sites in the process.