The Acer Aspire R13 convertible Windows 8.1 notebook proves that a full-featured convertible notebook computer with a responsive touchscreen appeals to entertainment minded users who want to work and waste time with a single machine. However, does the R13 come with too many compromises that lower the enjoyment of using this machine? Will users enjoy taking it with them to college, home after a work day for some down time, and on the road for occasional media creation? The interesting way the screen swivels horizontally to go into tablet mode will grab some attention, but we’ll let you know in our review of the Acer Aspire R13 (model R7-371T-78UV) if it’s just a cool trick or a tricked out convertible Windows 8.1 notebook. 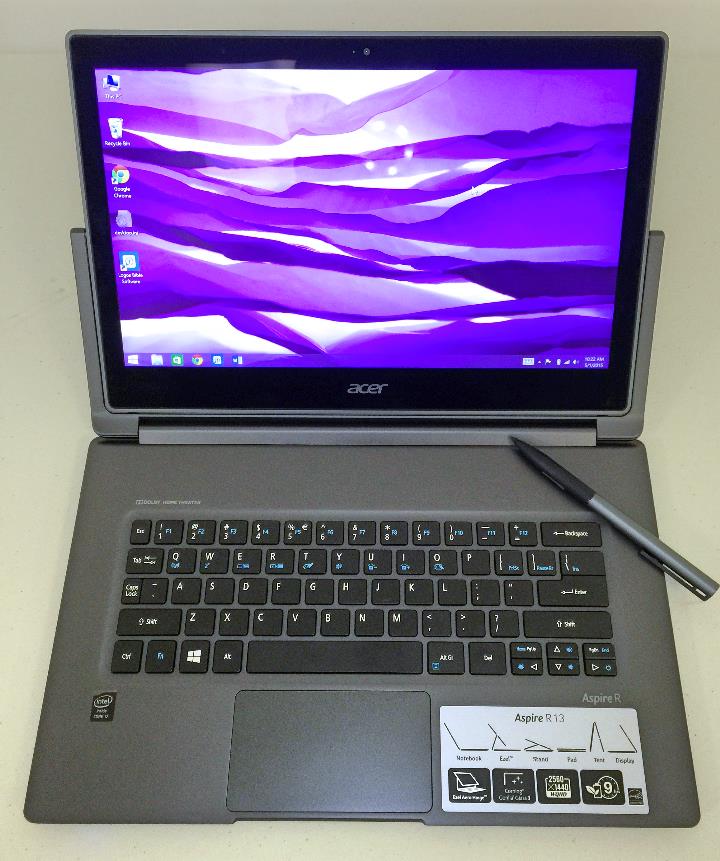 The Acer Aspire R13 performs exceptionally in a versatile, convertible form-factor. The screen rotates in place horizontally and folds down to turn this notebook into a tablet with touch and the Acer Active Pen stylus. The screen looks bright and the colors seem accurate. The specs rival the Microsoft Surface Pro 3 and other high-end machines (see our list of competitors below).

Unfortunately, the machine weighs a little more than most people would like with a tablet, so it’s a notebook first with occasional use as a tablet when there’s a need, like resting on a podium for making presentations. Also, the keyboard feels mushy and this affects accuracy on the edges.

Who is the Acer Aspire R13 for?

Acer designed this as an entertainment machine with a high resolution screen and interesting convertible design. The power makes it a nice fit in a photographer’s tool bag. Students could take it to college and write papers, while also using it for watching videos in one of the many modes useful for showing off content on the great screen. 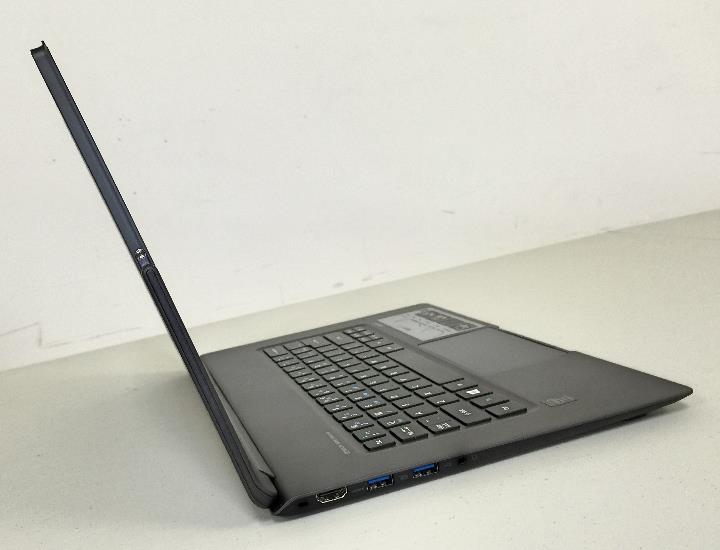 The R13 weighs a little much for a road warrior, but occasional travelers won’t mind toting it around in a bag. The convertible design will fit on cramped airplane tray tables.

Writers may not enjoy the touch trackpad and mushy keyboard, unless they prioritize entertainment first and typing second.

In spite of the slightly heavy 3+ pounds, the Acer Aspire R13 feels like an ultra-book thanks to the tapered design along the edges and the extremely thin display. Some people I showed the computer to didn’t like the swivel screen and a couple even said they feared it would break too easily. I didn’t react that way. It seems sturdy and the connectors that hold the display in place never caused any problems in a few weeks of heavy use. 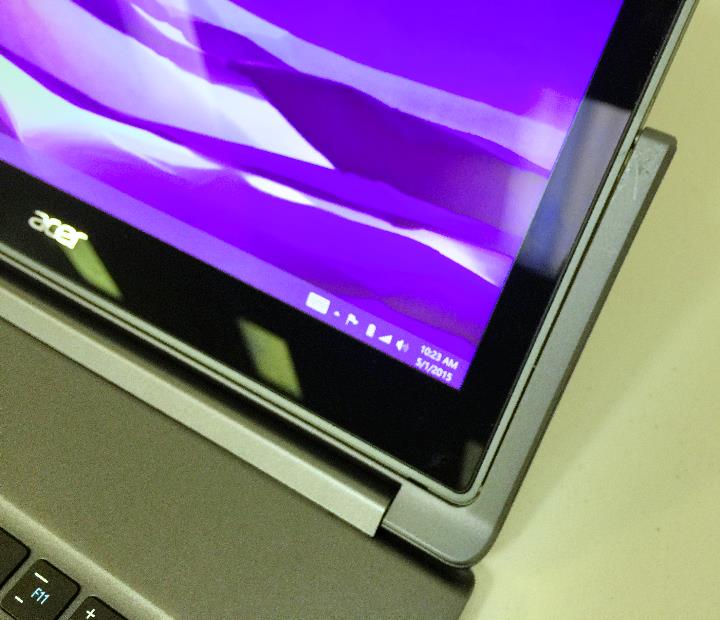 The computer’s dark gray color and slightly textured finish around the keyboard and trackpad looks and feels subdued, but mildly attractive.

The display part of the notebook has a glass lid. Hopefully, this won’t make it more fragile while carrying it around. The Acer logo shines through the glass back. The slick lid feels smooth to the touch. The hinge holds up the display firmly and it is easy to lift open with one finger. 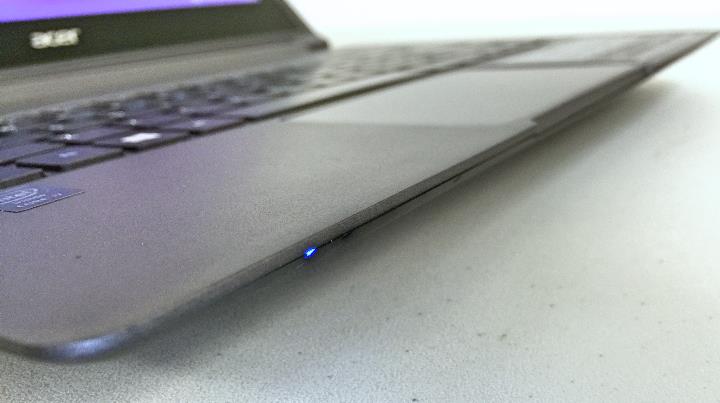 Notice the power LED along the front on the left side. 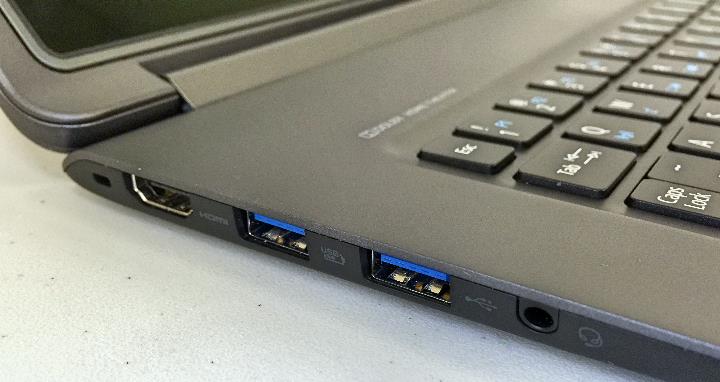 The back edge sports two fan vents, which didn’t whir very often. Only when the computer’s getting taxed while crunching some video did the fan kick on. 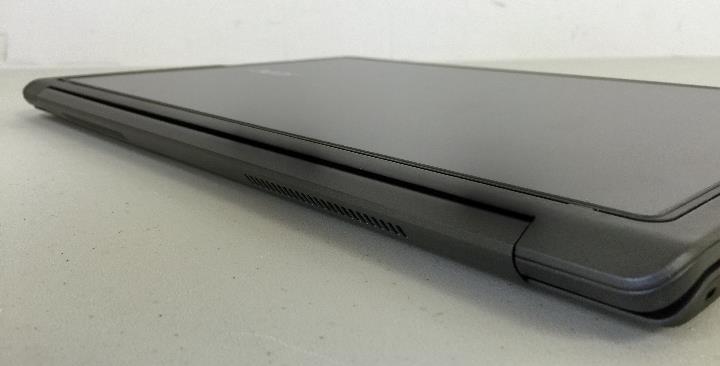 The left edge includes the Kensington lock, an HDMI out port, two USB 3.0 ports and the mic/headphone combo port. 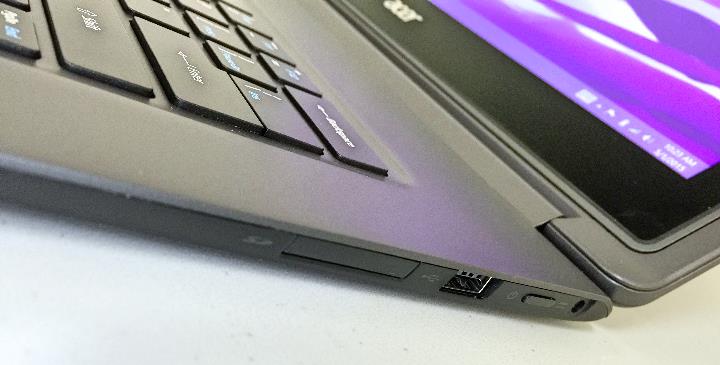 The charging connector, power button, USB 2.o port and an SD card slot come on the right edge. The computer offers a decent complement of ports and connections compared to other machines of this caliber.

Here’s where the Acer Aspire R13 falls a little short. They left and right edges of the keyboard proved difficult to type on at first because the keys need a little more force than they should. They also feel a little mushy. The arrow keys are so tiny, they’re hard to use while looking at the screen. 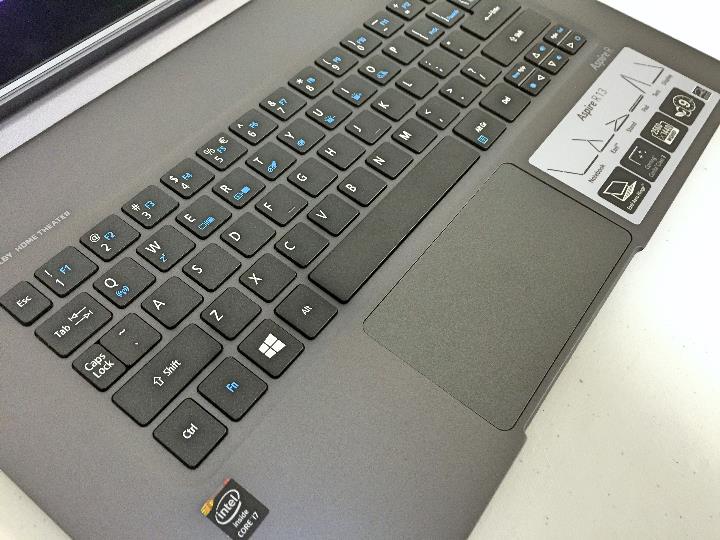 Writers will need an adjustment period to get used to the problematic keyboard. It wasn’t terrible after a couple of weeks, but the computer needs a better keyboard.

The trackpad feels responsive. In fact, it’s too responsive while typing. My cursor often jumped to another insertion point while typing because my palm just briefly brushed the edge of the trackpad. 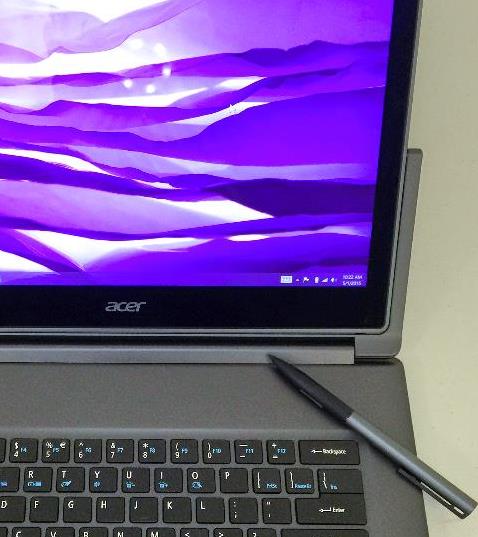 The touchscreen and stylus work great. Windows pops to attention almost instantly when the user taps on the screen. The stylus gave us accurate input and smooth inking while taking notes, writing in the Windows 8.1 handwriting input box and while drawing. Artists and people who need an accurate stylus will love the Acer Aspire R13, if they don’t do a lot of typing.

In normal light the screen looks good, but in bright sun the reflective surface reduces clarity. However, colors look nice and the 2560×1440 display produces beautiful text and detailed images.

The wide viewing angle makes it easy for three or four people to sit around the computer to watch a streaming video on YouTube or a presentation in an office conference room without a big screen to use.

The touchscreen and the stylus grab the headlines for the Acer Aspire R13. Rotate the screen horizontally and lay it back over the keyboard and then pick it up for some handheld surfing the net. Windows controls make it hard to touch, so the Acer Active Pen improves the situation.

The versatile design allows for up to six modes. See the slide show below to get examples of all six modes.

I’m not much of an artist, but I could see artists using the Acer Active Pen with pleasure. The tip’s accurate and gave no lag or stuttering, like some active styluses.

Another strength of the Acer Aspire R13 comes thanks to the 5th gen Intel Core i7 processor, 8GB of RAM and 256GB SSD. The machine boots up in seconds and restarts in less than half a minute. It handled everything I threw at it with ease.

The integrated Intel HD Graphics means users can’t play high-end games, but some older titles will work. It also did a nice job encoding video and editing photos. All of my most power-hungry software ran beautifully. 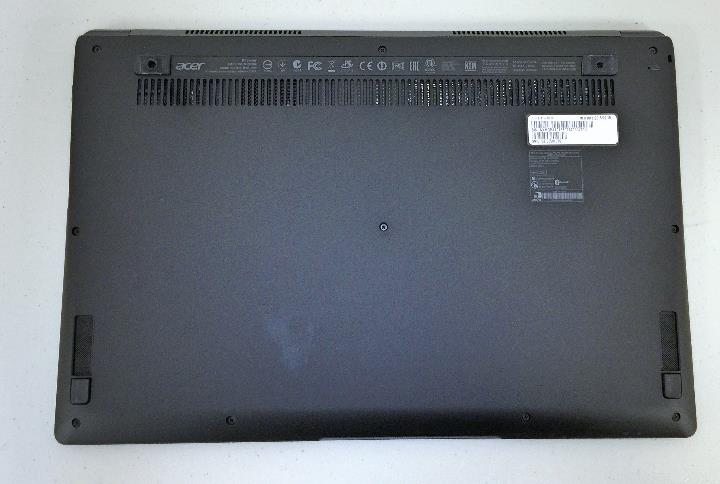 The battery lasts a long time. I ran it down to 7% and it shows 30 minutes of use left. That’s just an estimate. Acer promises 10 hours. That’s amazing accurate. The review unit lasted every bit of 9 hours and I’m hard on batteries in my typical use. 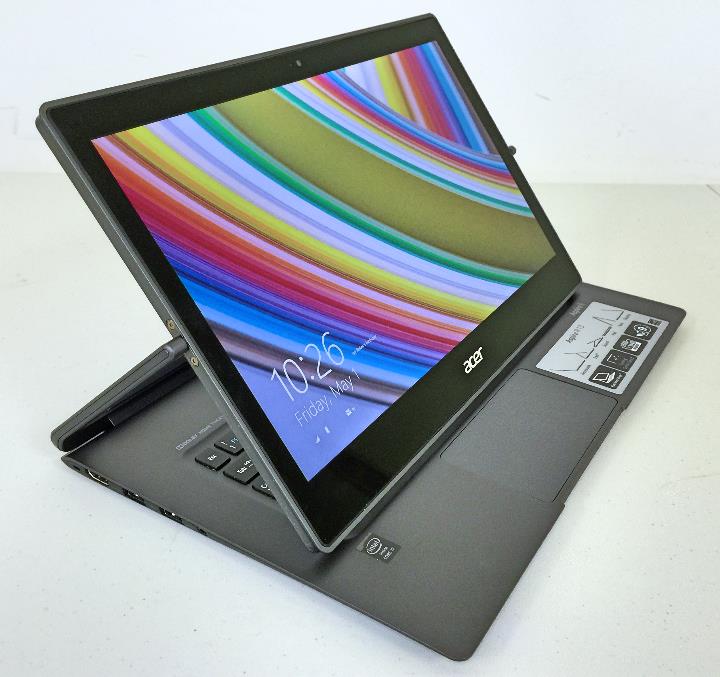 With a better keyboard, this machine would serve so many different needs. However, people who type for a living or who do a lot of typing for their personal use will want to look at another system. High end gamers will need dedicated graphics, something this machine doesn’t give them. However, most people will think this machine gives them enough power for the average tasks, for entertainment and even some light pro-level media creation purposes.

Acer doesn’t currently sell the model we reviewed on their website, however Amazon sells it for $999.99. That’s $300 off the retail price for this model. Hit the Acer website to find a comparable model with slightly different specs, which buyers can get now.

For most users, we consider the Acer Aspire R13 a buy, thanks to the high-resolution screen, versatile design, excellent touch and pen capability, and great battery life. Only the weight, the heft, and the keyboard and trackpad make our list of CONS. I wish I didn’t need to return it.