Cloud Outliner Comes to Mac: Still Clean and Simple to Use

Cloud Outliner, which brings simple outlining to an iPad or iPhone, now it works on the Mac as well. The app organizes a user’s thoughts, helps with typing notes or planning projects and works as a basic To Do or shopping list app.

Check out our review of the iPad and iPhone app over at GottaBeMobile.com. The Mac app looks identical, except on the Mac it comes with a menu (like all other OS X apps). It also offers iCloud sync, which is added to the iOS app too, making it more useful.

The user’s outlines show up on the left with the selected outline content showing on the right. Hit the plus or minus button in the lower left to either add or delete an outline. Notice that users can search their outlines in the search box at the bottom. Also, they can hide the list of outlines if a user wants to work on one outline or list without distractions. Like the iOS app, the user can add check boxes or hide them. The Mac app also runs in full-screen mode. 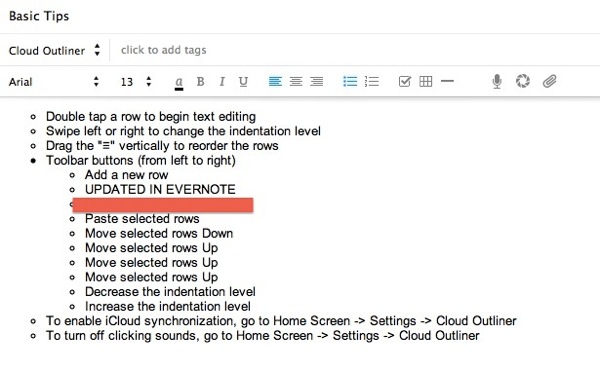 Evernote: Add text inside Evernote and it shows up in Cloud Outliner too. 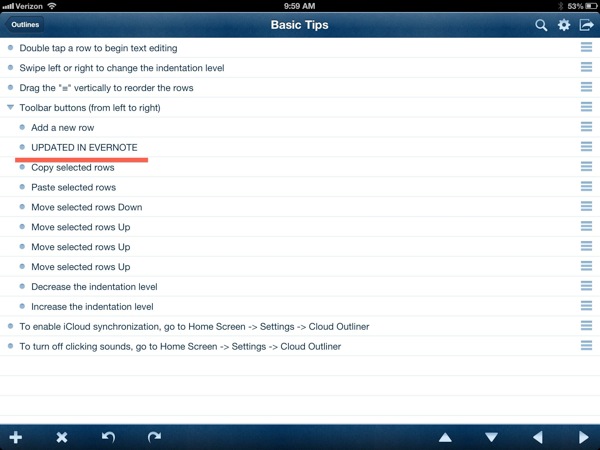 Users can export their outlines via a proprietary Cloud Outliner Document format or as an OPML file, a format used for online lists. Also,  they can make any outline into a list with check marks. This becomes useful for shopping lists, project steps or even when people share a speech and want to check off their points as they speak.

Cloud Outliner does outlining well and does it simply.

On the iPad the app costs $4.99, which seems steep for what it does. The Mac app costs even more at $6.99. It adds a couple of new features, like iCloud sync and Evernote interoperability. A total of $12 for both apps feels expensive for what they do, especially when someone can get the same features in free apps like Evernote, which handles outlines well… even if not as simply.

I’d only recommend Cloud Outliner to those who do serious lists and outlines and want to keep them separate from Evernote. Otherwise just use Evernote for more simple outlines and lists.