SoundNote: iPad App of the Week

SoundNote is a note taking app with a couple of neat tricks under its belt to make it worth the $5 price tag. With SoundNote, users can take notes, record audio, and then export the notes and the audio.

SoundNote is like most note taking apps in that it looks like a ruled notebook with white paper-like interface. In portrait mode all you see the notepaper background and a single note. Tap the Documents button and a list of notes will drop down. 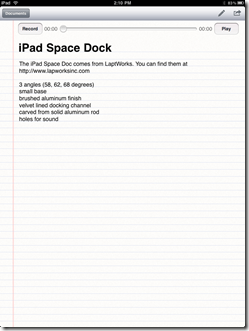 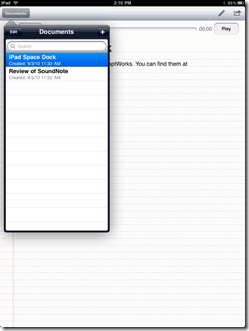 I like using it better in landscape mode where the note lists is visible on the left hand side, like a Windows Explorer window. There are no folders in the app, which would be a nice addition for a future update. 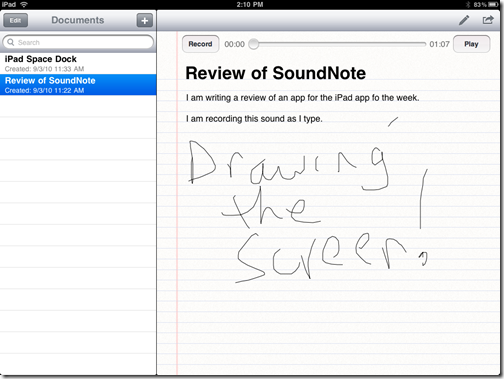 Input is done via typing or drawing. In typing mode, the page looks like a ruled notebook page. 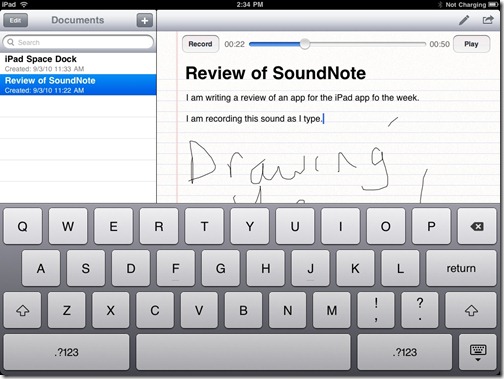 In drawing mode, which is accessed by tapping on the pencil icon, the page turns into a piece of graph paper (see below; image darkened  to show graph). In drawing mode, a user can draw then tap on what is drawn and move it around by dragging it. 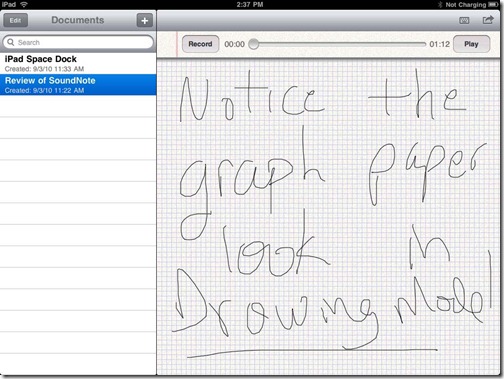 What sets SoundNote apart and gives it the name is the audio recording feature. Once the note is opened, tap the record button below the toolbar to the left. The audio time signature appears and counts the seconds and minutes. 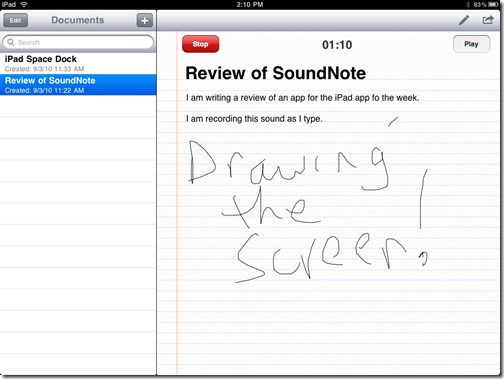 The capacity is only limited by the capacity of the iPad. During recording SoundNote tracks what is typed or drawn. To access a specific moment in the recording, simply tap on the section of your notes you are interested in and the audio recording jumps to that spot. From there you can hit play and SoundNote will start playing the audio, starting a few seconds before the location of your note.

This would be very useful for recording a lecture in school or a meeting at work. If a student drifted off and lost focus doodling, she could just tap the doodle and listen to what the professor was saying at that point and add it to her notes. If someone can’t read his handwriting, he could just tap the scribbles and hit play and whatever was being said during that moment will be played to remind him what the chicken scratch was supposed to represent. 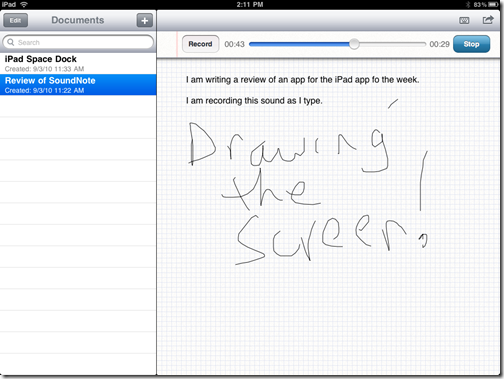 Once the recording is finished, the note and audio file can be exported in a few ways. First, just the note can be emailed as a PDF file. Second, the note page and the recording can be emailed. When sending the email, there is an option to share the file by sending a link to a shared folder on DropBox. If the user is a DropBox subscriber, this might be the best way since audio files could get large and be rejected by some email services. DropBox also has a great iPad app which would allow the user to then open the PDF file in another application by getting it from DropBox in the service’s app. I previously reviewed the great DropBox app as an iPad App of the Week.

The third way of sharing the notes and audio is via a network. Tap on the share button and the third  item says File Sharingâ€¦â€. 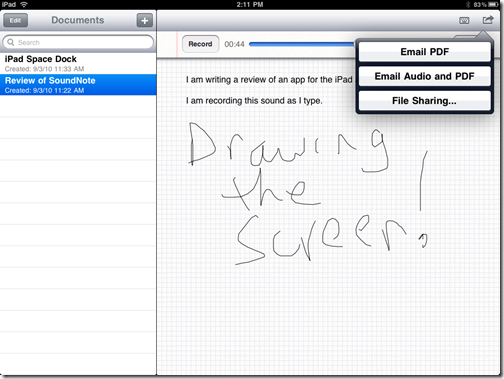 Tap it and a window pops up with the addresses (either URL or IP address) of the file on the iPad. 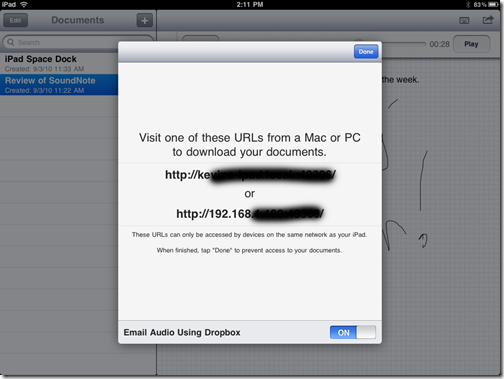 Type that into a web browser on a computer on the same network as the iPad to download the file.

SoundNote is a very good note taking app that syncs the audio with the notes. If the developer would add the ability to group notes into folders or add tags, it would be more useful. Also, syncing with a service like Evernote would also be nice. Or it would be nice if the share button brought up the Open In… menu item that is allowed in the iOS interface, that way the notes could be opened in an app that can read or edit PDF files.

When drawing it would also be nice to have the ability to change the drawing tool width and color as well as access to an eraser.