The blueLounge Backpack holds a ton including your laptop, up to a 17″ MacBook or other large notebooks, and all the accessories you need on a trip or on campus.

The many pockets will store more than most people need to carry and it does so comfortably and reliably. Packing up can get awkward and it collects link like your dryer trap. 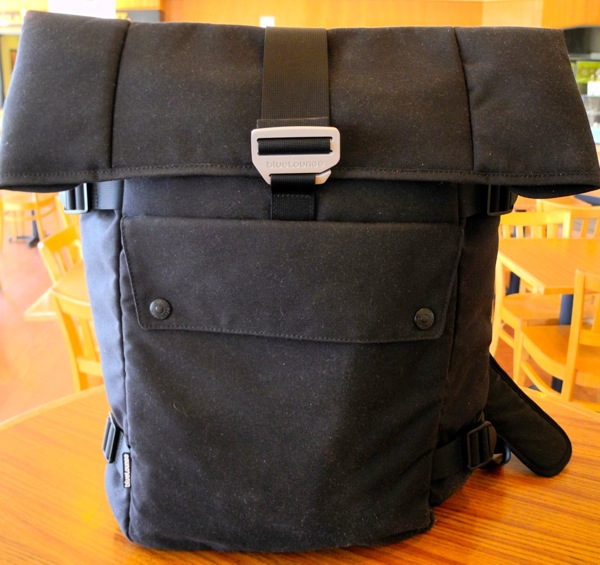 I tested the blueLounge Backpack over the course of a couple of weeks and loved the vast amount of storage.

Sometimes I like to go light, with just my tablet and MacBook Air. If that’s you, the blueLound is overkill.

On long trips I often carry a 15″ MacBook Pro, an iPad or other tablet, my external 16″ AOC monitor, plenty of chargers and cables, a mouse and some camera gear. I also brought along my Logitech Bluetooth Tablet Keyboard.

The blueLounge housed it all easily thanks to a huge internal pocket and a few other special pockets inside and out.

Inside there’s a massive pocket. A student could carry a semester’s worth of books. A traveller could use it as their lone carry on bag with a change of clothes. Instead I just loaded it up with gadgets and accessories. 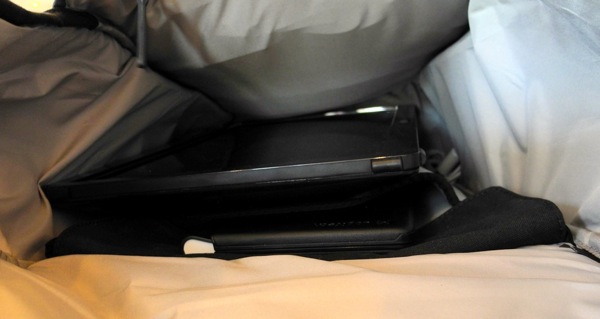 Another open pocket on the front of the internal notebook pocket with the velcro flap holds a ten inch tablet. It’s designed for the iPad, but others will fit as well. Looking at the front of the bag, along the left side there’s another zippered pocket that unzips vertically. It’s kind of hidden and fits magazines, file folders or another small netbook or tablet. Bulky items poke my back as I wear it so I only put flat items in that pocket. 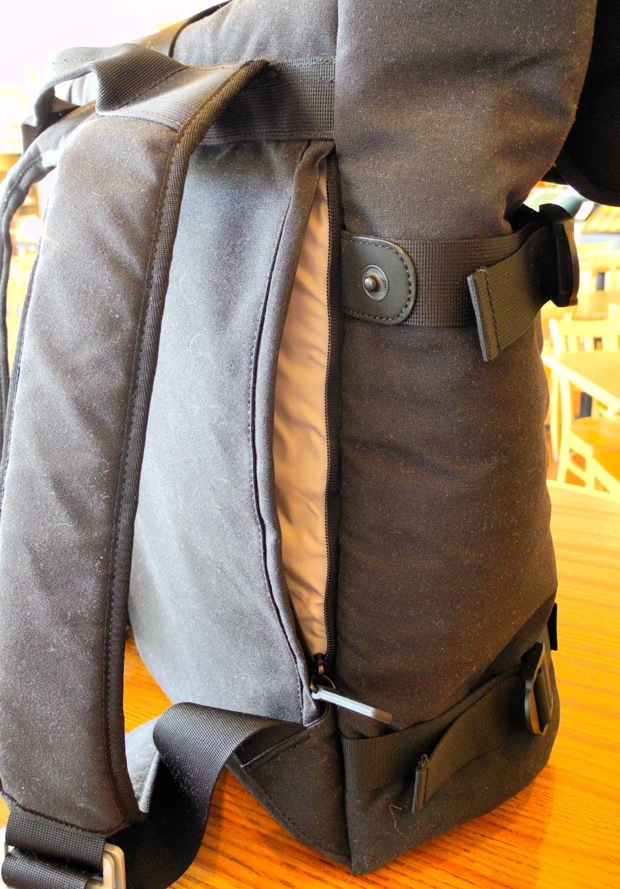 Outside the bag on the front the bag offers another snapped pocket for even more storage that’s quickly accessible. I put my VGA cable, USB hard drive, and MacBook charger in there. It fits much more. 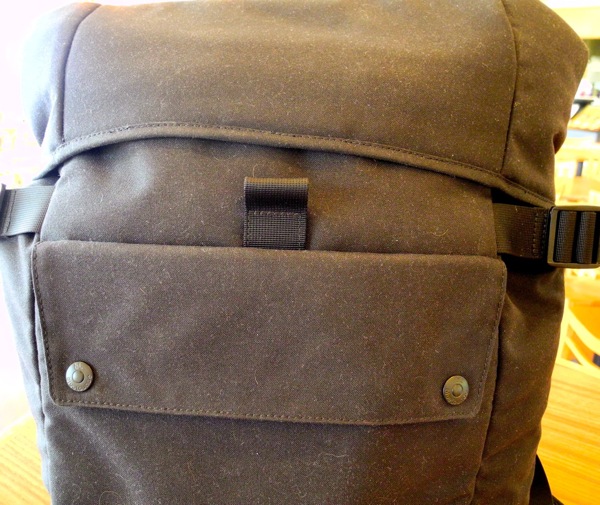 The bag design lets the user customize it. I already mentioned the two options for the flap on the inside notebook pocket. I can either roll down the large top flap or fold it down and snap it to the two snaps on the side making it look like a hood (see above). I found rolling the flap down the easiest. Using the snaps (see below) is a bit awkward if someone wants to quickly pack up and run and they don’t stay fastened if I pack a big load in the backpack. 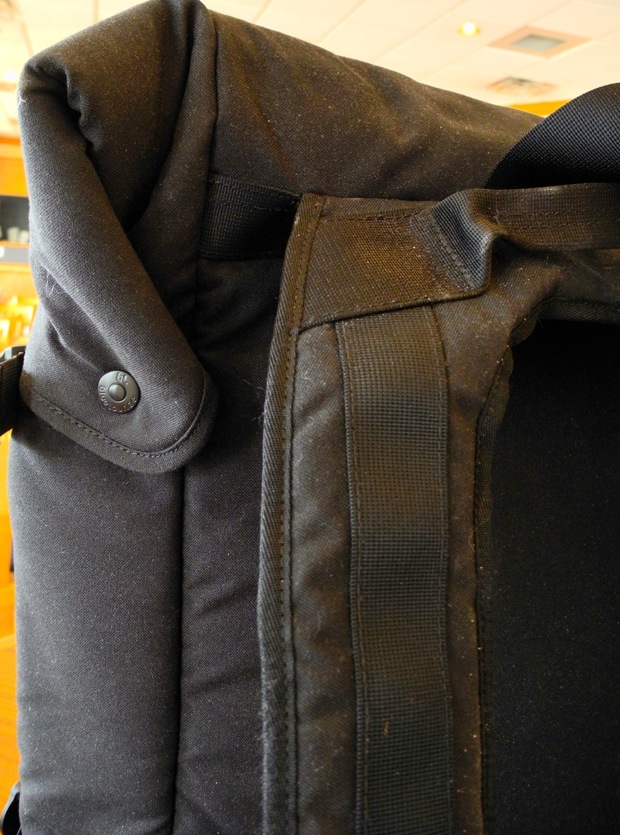 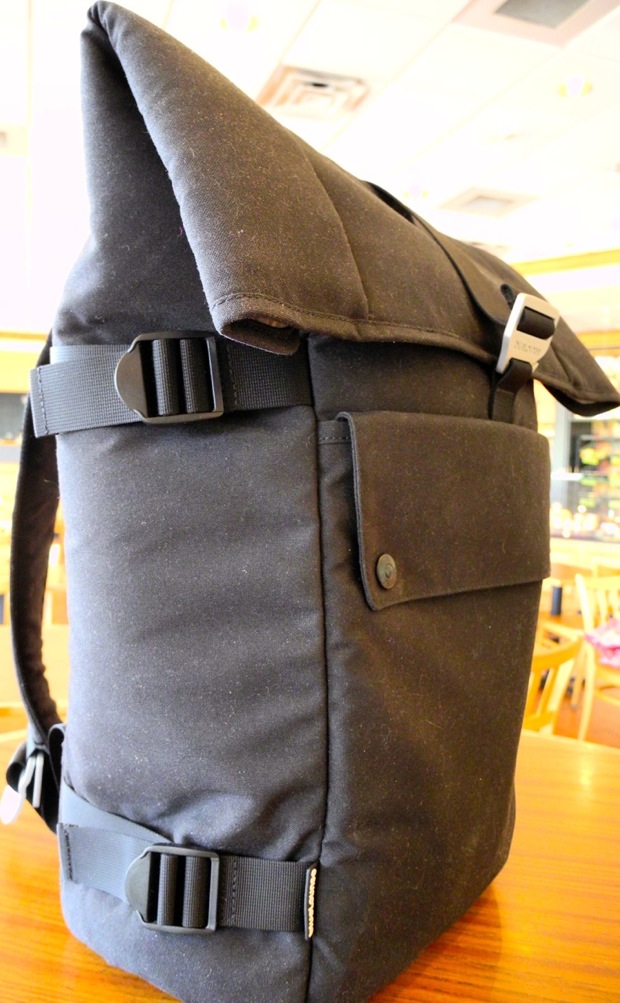 Along the side, if the user doesn’t need all that internal storage, four straps will pull tighter to make the internal pocket narrower.

The designers used a parachute style adjustment system for the backpack’s shoulder straps. I can quickly adjust them for comfort. The padding keeps the straps from digging into my shoulders even with a heavy compliment of gadgets stored in the bag. 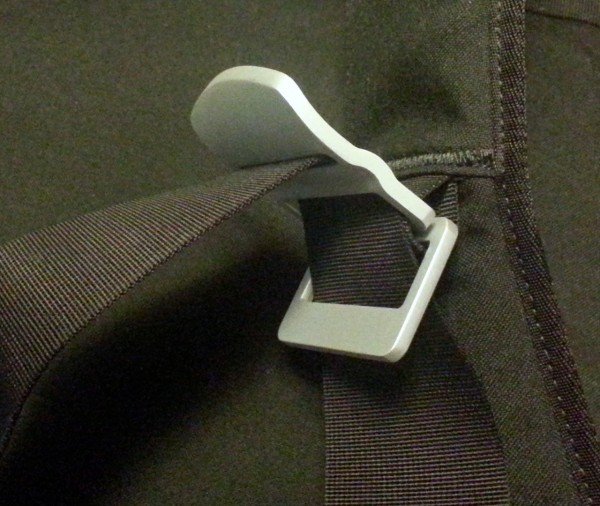 The right shoulder strap holds an aluminum carabiner to hold a water bottle or GPS unit while hiking.

The backpack looks impressive when first opened. It’s all black, which I prefer. People who like some color won’t.

After just a short usage, the 100% recycled plastic that the company used to make the fabric began to collect lint. Dark bags show lint more easily than lighter colored bags. I needed a lint brush to clean it off after putting on my floor right after a good vacuuming of the floor.

With the top flap rolled down it looks a little strange. It reminds me of one of those packs that people carry with their sleeping matt rolled up on top.

At $159 retail price at blueLounge and Amazon, this bag better deliver. If you need a ton of storage in a comfortable backpack that will last, then give the blueLounge Backpack a close look.

It will serve students with a heavy load quite well. The backpack offers a pack that will hold up to some rigorous usage. At this price it has to last and should. The versatility and build quality make it a good value, despite the price.

For travelers who carry a lot of tech, this blueLounge Backpack should make its way onto the shopping list.