AMD didn’t have as splashy a CES as Intel did, but the chip maker isn’t taking the whole ultrabooks thing lightly. In Las Vegas they showed off an ASUS machine with an “Ultrathin” moniker. However, it doesn’t quite match ultrabooks spec for spec (beyond the processor, of course).

The notebook itself is over 4 pounds instead of sticking close to 3, plus the chassis is thicker than the ultrabook spec by a few millimeters. Plus, the model they showed off — available now in China and soon in the U.S. — used more plastic than the ultrabooks we’ve seen. All of this account for the low price, which will be around $500.

It looks like AMD’s goal with their Ultrathin notebooks is to beat Intel-based machines on price and battery life. That’s how AMD usually rolls. Where the chip maker can’t quite compete is performance, and that may be the biggest and most important difference between ultrathins and ultrabooks. 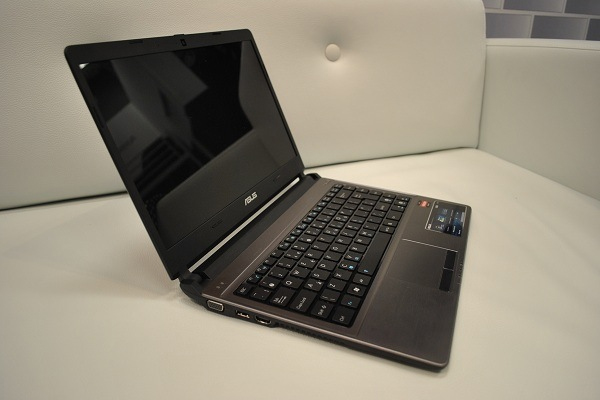 The chip inside the ASUS notebook we saw was an A Series APU which combines processing power and graphics on one chip. The A  Series notebooks we’ve seen do have impressive graphics for systems with an integrated chip. However, Intel’s integrated graphics are now good enough for watching HD video and playing casual games, which is all that many mainstream users need. Where they need power is in productivity and Intel delivers that.

According to this Digitimes report, 20 AMD-based Ultrathin notebooks will hit the market in 2012. While they may not be as innovative as Ultrabooks, they will be a lot less expensive. Which is going to matter more to consumers?

For those who care most about portability, the wave of ultrabooks coming our way is great news. The only downside right now is the price, which isn’t always under $1,000 as Intel wished. Once the third generation of Intel Core i chips come to market ultrabook prices are supposed to drop, and there are even rumblings that they could reach netbook prices by 2014. What if AMD’s lower prices make that happen sooner? Will consumers give a little on portability to have a relatively thin and light notebook for under $700?

We may not have to wait long to find out. Digitimes reports that AMD originally planned to launch Ultrathins in June of this year when their next generation chip was ready, but now they’re going to launch them sooner with their Trinity APUs and focus on the price aspect.

I predict that the end result of all this wrangling will be that AMD’s machines, be they ultrathins or low-cost ultraportables like the HP Pavilion dm1, will settle in the space netbooks occupy now since that category is rapidly disappearing, while ultrabooks become increasingly mainstream and make 13-inch screens more popular than 15-inch ones are now. Give it two years and we’ll see i I’m right.