If The MacBook Pro Line Goes Air-esque And Thin, Will It Be Good Or Bad For Laptops?

You know that rumor about the possibility of Air-like 15 and 17-inch MacBooks coming out later this year? I can’t help feeling a little excited about the possibility. Unlike the majority of tech rumors surrounding Apple, I give this one credence simply because it makes so much sense. As a professional with a vested interest in mobility, the idea of a large-screen laptop with a thin profile and light weight fills me with glee. Not only for the tiny part of me that digs the MacBook, but also for how this will shape all laptops.

The Unofficial Apple Blog’s rumor mill has it that these won’t just be larger Air models, but MacBook Pros. Which means that they are the future of Apple notebooks, period. 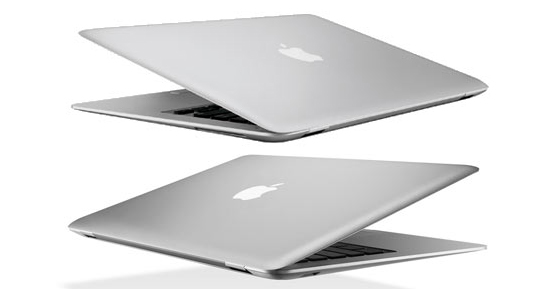 Right now, if you’re in the market for an ultraportable laptop, you have several choices… as long as those choices include machines with 13.3-inch displays or smaller. Most 14-inch and a few 15-inch notebooks can make the grade as thin and light, but their portability can’t be termed “ultra”. A 13-inch screen is an acceptable compromise for mobility, as it’s a good size for most tasks and won’t have you squinting with a 1366 x 768 res.

But the audience for the 15 and 17-inch MacBook Pros include people who need a bigger screen for the work they do. I used to be a web designer, and having a large screen made multitasking, image editing, and layout tweaking much easier. I remember when I bought my first 17-inch notebook I bragged to a friend that it was only 7 pounds.

I needed (and still sometimes need) the flexibility of a laptop in case I had to visit a client or work outside of my home. I’m sure plenty of other MacBook Pro users feel the same. If a big screen was the only consideration, they’d buy a desktop. Still, the Pro line is definitely not “ultra” in its portability.

That’s why the idea of thin 15 and 17-inch models is so appealing. If Apple can deliver machines that have the power and screen size of the Pro line (true power, none of that integrated graphics nonsense) and the slimness of an Air, that sounds like a hit to me.

Of course, there are some cons to this. The big one being price. If we’re talking SSDs, that’s a huge chunk of money right there. Professional users aren’t going to be happy with 64GB; 128GB may not do for some. And as with the Air, you’re going to pay for that super slimness and the engineering that went into it.

I’d also worry about potential lack of ports. An optical drive most can do without these days, but Apple already has an unnerving habit of skimping out on ports for the Pro line. Memory card reader on the 17 incher? You don’t need that! What would anyone do with more than two USB ports? Look, Thunderbolt! If the line is going super thin, I’d expect fewer places to plug things in.

On balance, I think right now the concept is a win. Especially because of the ripples it will create in the laptop market. It took PC manufacturers several years to match the MacBook Air – they’ll have to work faster to compete with a super slim MacBook Pro. Once consumers get a taste of a 15-inch laptop light enough to carry everywhere, do you think they’re going to look at the HPs and Dells and Toshibas at Best Buy and accept that 1.5-inches is slim and 5 pounds is light?

One thing PC manufacturers may have in their favor is that they offer a wider variety. The more budget-priced 15-inch laptops will continue to be “bulky” while high-end models slim down even more. Apple may even be doing them (and us) a favor. If the price of more expensive components like SSDs comes down thanks to the MacBook Pro, there could be enough benefit to spread around.

For the moment, I’m cautiously excited. I’m definitely in the camp that feels these new slim Pros will be a good thing. Of course, the rumor could turn out to be false and my dreams of a lighter laptop world dashed to pieces. Perhaps if I write to Santa now, he’ll work with Steve to get this thing done in time to put a new MacBook under my tree.