Microsoft had recently unveiled a countdown timer website to get people off of its Internet Explorer 6 browser and begin to upgrade to more recent versions of IE. IE6, is a ten-year old browser, and Microsoft tells users “It’s now time to say goodbye” on www.theie6countdown.com.

The company’s goal is to get the percentage of users using IE6 down to 1%. The goal of the countdown website is to not only highlight some of the security benefits of newer IE browser versions, but also tell users of other enhancements, such as tabbed browsing and improved browsing speeds.

There are many benefits of upgrading to a newer version of Internet Explorer – improved speed, tabbed browsing, and better privacy settings to name a few.

While having users upgrade to a more modern version of IE will definitely be beneficial for users, it would also be beneficial to Microsoft as the company would no longer have to invest as much resources into supporting the decade-old browser.

The site shows that currently, 2.9% of Americans still use IE6. The highest concentration of IE6 users would be in China, at 34.5%, followed by South Korea, at 24.8%, and Japan and Vietnam, each with approximately 10%. 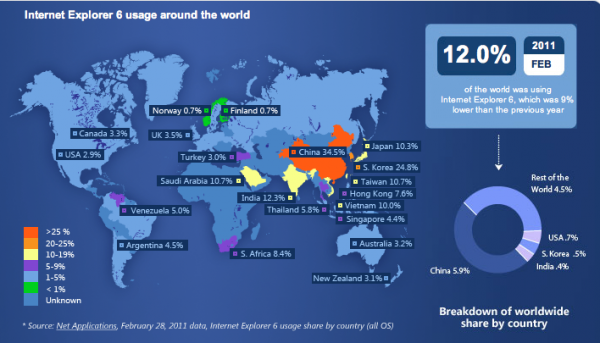 If you haven’t upgraded your browser to something more modern, we recommend a newer version of IE, Mozilla’s Firefox, Opera, Google Chrome, or Safari. There are a number of modern browsers available that will allow you to take advantage of security features, faster webpage loading and rendering speeds, and plug-in support including those for Silverlight, Flash, and HTML5.