Stop Banning Notebooks in Senates & Classrooms Because of Bad Apples 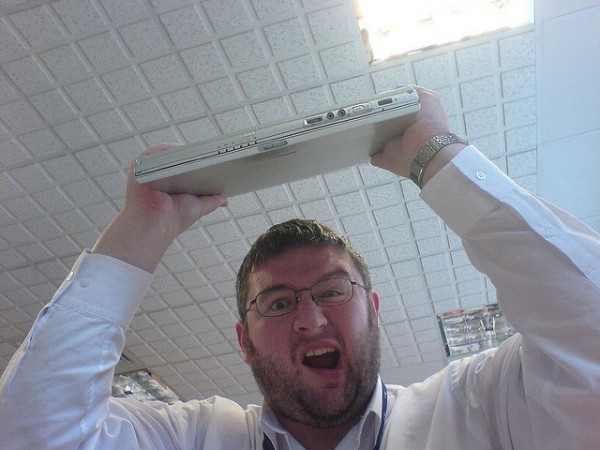 No Notebooks Allowed. That’s what you’ll hear if you try to take your notebook into the Missouri Senate, classrooms across the country and even in some coffeeshops. The argument is that the presence of a notebook or laptop can immediately strike down the ability of otherwise reasonable individuals to listen, debate and carry on a conversation.

It’s understandable that some individuals have absolutely zero self control and will waste away class time, that they are paying for, surfing the web even though it is painfully obvious to the speaker what’s happening. Yes, there’s bound to be one senator who can’t keep his solitaire or, Ahem, other addiction in check long enough to complete a meritorious debate on state law, but there’s much more to be gained by allowing technology into our classrooms and legislative bodies.

For example, students who are able to research a topic that comes up in class are often much more willing to add to a discussion and can bring concrete examples of current events or data, something that would have been unthinkable before notebooks became standard equipment for students. Speaking of the past, remember when notebooks weren’t there to stifle discussions and distract students? They still had notes, daydreaming and games that were designed to run on the TI-83 calculators, which I might add students were required to carry with them.

In the state of Missouri, notebooks are not allowed in the senate, even thought they can be found across the capital in the House and senators can absorb themselves in their BlackBerry devices. Backing the current ban on notebooks Senator Brad Lager told StlToday.com that, “There is a compelling argument to be made that a senator sitting there listening to the debate is engaged at a different level.”

Interestingly enough it is OK, and common for senators to be seen typing away on their BlackBerry devices and the rules would potentially allow for an iPad since it is not a notebook; even though you can turn it into a notebook with some accessories and apps.

Wouldn’t we, as a nation, be better served by representatives who can use 21st century tools to take notes and research matters of great importance while the debate is taking place instead of after a bill has been passed? The absurdity of denying access to technology due to the possibility of adults being unable to control their urge to check a website is astonishing.

If we are that worried about the actions of a few bad apples, let performance sort them out. Students who don’t pay attention will learn sooner or later that there are consequences to ignoring the professor. Senators who surf the day away will either be called out by a rival on the floor or caught on CSPAN looking at something they shouldn’t there’s no reason to handicap the whole for the actions of a few.

It’s about time that we accept technology’s role in our success as a nation. After students graduate they will be expected to carry a notebook or tablet to work and into meetings for the rest of their live’s, well unless they join the senate, so why do we feel they can’t handle the responsibility of paying attention until they earn a degree?

Isn’t it about time we stop blaming technology and strive to provide our students and our leaders with the best tools to accomplish their work and goals?