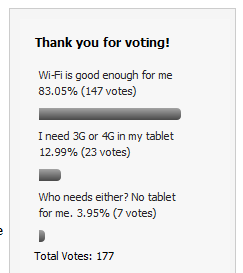 Over at JKOnTheRun Kevin Tofel raises a good question about the connectivity of upcoming tablets, many of which are launching with 3G or 4G versions before a WiFi only version is released. Tofel asks readers if the 3G connectivity is a must have and unsurprisingly the early results are staggeringly on the side of WiFi over 3G.

Why would users want fewer features? Well, cost is the primary factor. More users are getting smartphones which is already adding another monthly data fee and few of these users want yet another monthly connection fee for a tablet. This isn’t even taking the mobile hotspot feature into account, which has its own monthly fee.

In talking with many users who are contemplating their first tablet we continue to hear a demand for apps and the ability to surf the web and check email around the house and at a hotel or campground over WiFi.

While some users, like Kevin, will use a smaller tablet like the Galaxy Tab more like a phone. The average user we have talked to is looking for a laptop replacement and as such, don’t expect to have mobile broadband, nor do they want to pay for and sign another contract.

Even though I am a mobile power user the last thing I want is another monthly fee that is limited to one device. I would much rather use a MiFi that can connect my laptop, my iPad, my wife’s Nook Color or any other WiFi device than a single use connection.

How do you feel about 3G and 4G connections in your tablets? Does your opinion change if the tablet is smaller?