The Daily: iPad App of the Week

News Corp. released their first ever daily news service only for the iPad yesterday called The Daily. We looked at the main features when it launched and liked the app enough to give it deeper a look as this week’s iPad App of the Week.

The Daily is free to download from iTunes, and comes with a two week free trial. After the trial ends subscriptions will be available starting at 99 cents a week. 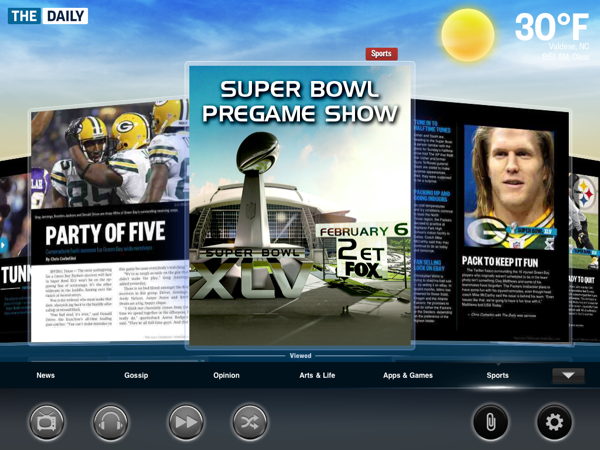 When you first open The Daily it downloads the most recent issue. Their site says that once downloaded you won’t have to download the day’s stories again, but we have found that literally every time we open it something is being downloaded.

Once it is opened you see a cover flow style screen with the top stories called The Carousel. Along the bottom are the tabs for each new section – News, Gossip, Opinion, Arts & Life, Apps & Games, and Sports.

The Control Panel shows up at the bottom but then goes away if you don’t immediately tap it. To get it back hit the tiny arrow on the right end of the lower bar with section tabs. In the Control Panel there is a TV icon that gives you a video of the day’s highlights called The News Anchor, as in TV news anchor. There is also a headphone icon that when tapped will actually read some of the articles to you. Not all articles can be heard.

There is an Auto-play icon that takes you through the Carousel story-by-story until you find one you like. Just tap it to stop the Auto-play. The Shuffle button randomly moves to different stories for a moment and then moves to another randomly until the user taps the icon again to stop it. Finally, the Saved Articles is shown by hitting the paper clip and you can set your personal settings for zip code, horoscope preference, and account information with the last icon.

Here is the app’s own video demo:

To delete saved pages just tap and hold the story icon as you would an app on the Home screen that you want to delete. When it begins dancing hit the X to delete it. It can be tricky to delete and visually it looks like it is still there. But close the screen and open it again and you will see that it is gone. 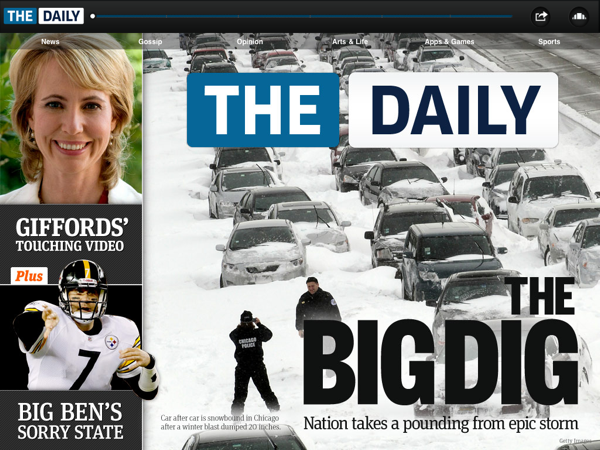 Under the setting screen, which you find by hitting the arrow at the right end of the sections tabs and then choosing the icon farthest to the right, you can change account information if you are a subscriber and turn on/off the breaking news feature which sends push notifications of important news items. The Daily Anchor can be toggled to launch on start up – that’s the video news breif seen in the Control Panel by hitting the TV icon. As mentioned, you can set your horoscope and zip code information.

We like that The Daily launches with weather info displayed at the top. Tap it and it goes to the weather section. Tap that and open it up to get detailed weather news and forecasts for your area. You also see your horoscope for today. There are radar and temperature forecast maps. It wold be nice if there was a video of your regions weather section as well. Maybe in the future. 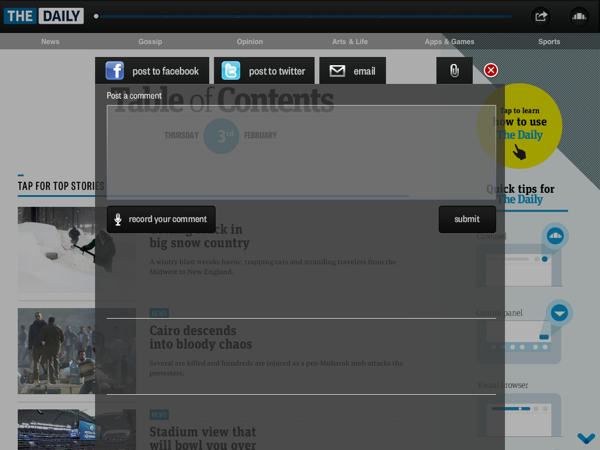 In the upper right corner of every page is a share button and next to it the button that takes you back to the Carousel. Also along the top is a slider. Tap it and previews of the pages show up and you can quickly scroll to a page. The share button opens a screen where you can post comments about stories, send some stories to Twitter or Facebook as well as send via email, although not all are available for posting. Rate stories and see how others have rated them. Leave comments and view others comments. You can also record a comment. Most of the audio comments were simple people testing by literally saying, “testing.” We’ll see how much people actually use this in the future. Could be a place for abuse too, so be careful.

Here is our video review of The Daily iPad app:

The Daily is a good first attempt at a daily news service designed specifically for the iPad. We will have to spend a little time with it to tell whether the content is really any good. Sadly, just like a regular newspaper the content can be a little stale. But if you want a real newspaper experience with some added multimedia content and social interaction, The Daily might be a good tool. At only $.99/week or $39.99/year the price is right. And the free two-week trial means there is no reason users should not try it.

The Daily is a free download in the app store and comes with a free two week trial. After that it will cost $.99/week or $39.99/year.