Verizon Wireless is crowned the year’s best 4G wireless network speeds and rollout of CES 2011 by the Notebooks.com team. How great is the network? Well, despite Verizon Wireless’s modesty, claiming speeds of 5-10 Mbps on the download side and 2-5 Mbps on the upload side, the network is performing equally as well or faster than competing 4G networks on other carriers.

With a rapidly deploying network, an arsenal of consumer and business-class devices launching soon, and robust speeds, Verizon will surely please the masses and over-deliver on its under-promised network. 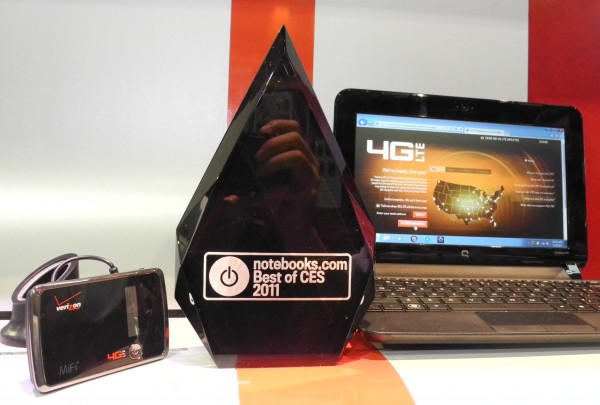 Despite adding 130,000 people to Las Vegas between the Consumer Electronics Show and another convention that is happening simultaneously in Sin City, Verizon’s 4G LTE network delivers uninterrupted 4G speeds of 8-12 Mbps. Speeds for downloads and uploads were so great that I opted to use my LG VL600 data modem for all of my CES Internet needs, ditching my hotel WiFi connection for truly an untethered mobility experience. .

While the carrier had announced LTE for 38 markets–most of which are major metropolitan areas with high traffic–the carrier is being very aggressive in trying to blanket much of the U.S. with 4G LTE. By partnering with local carriers in rural areas where wired broadband would not even be available, Verizon Wireless will be enabling people to “rule the air” by bringing wireless broadband mobility to those affected populations.

Launching with the HP Pavilion dm1 notebook, another Best of CES award recipient from Notebooks.com, a Compaq Mini netbook, 4 smartphones, 2 tablets, and 2 mobile hotspot router devices, the carrier will be releasing up to 10 devices in the first half of 2011 with many more to come.

We really appreciated Verizon’s understated promises and over-delivery of its 4G network. For its commitment to a strong, fast, robust, and expanding 4G network that blankets many people with multiple devices, Notebooks.com is awarding Verizon’s 4G LTE service with the award for Best 4G Network Speeds and Rollout of CES 2011.

Video: Samsung’s CEO comes on stage to deliver its own 4G LTE smartphone