When software comes on a CD or DVD and you want to install it on a MacBook Air, you can’t just  pop open the disc drive or slide a disc into a slot, like you would on a computer with an optical drive. The MacBook Air forgoes the optical drive to keep it thin and small. So you have to resort to one of the following means to get your programs installed.

Use Shared Optical Drive From Another Computer 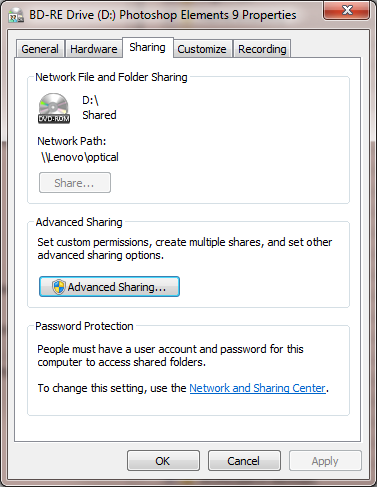 This will be different depending on what kind of computer you use as the source optical drive. If it is a Windows computer it will require setting up the optical drive (CD or DVD drive) as a shared resource in Windows. The best way to do that is open Windows Explorer and right click the drive. Choose Share With and then Advanced Sharing from the fly out menu.

In that box choose the Advanced Sharing… button and then check the top item which says “Share this folder” at the top of the resulting box. Click OK and then OK again and the drive is now shared.

Back on the MacBook Air, open Finder. Select Go from the top menu and choose Connect to Server. Or you can just press Command+K on the keyboard. In the resulting box type the following where the word COMPUTER is replaced by the name of your Windows PC and DRIVE is replaced by the shared name for your optical drive on that PC. So in the server address you type the following:

As you can see from the dialog box my computer is named Lenovo and I gave my D drive the shared name optical. So the path would be:

Now hit the Connect button and that drive will open in Finder. You can now use it as if it was attached to your computer.

If there is no Windows PC available, then this is now very easy in the most recent versions of OS X. Open System Preferences from the Apple Menu. Click on the Sharing app. The list on the left has one item called DVD or CD Sharing. Check the box next to it. For safety’s sake check the box that says “Ask me before allowing others to use my CD drive.” Now your drive should be seen by your MacBook Air. 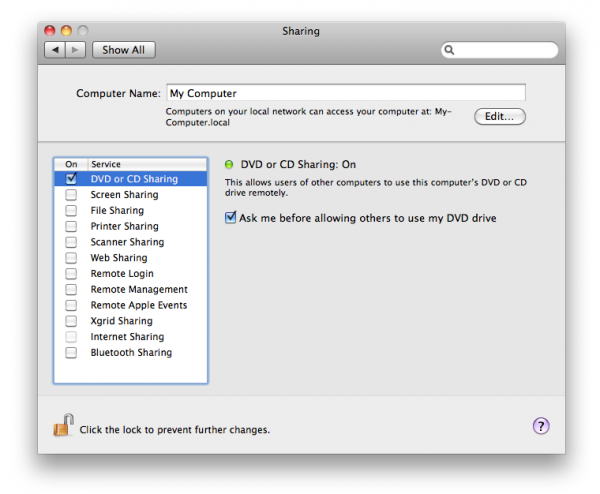 Now from a Finder window click on the Go menu and select Network. You should see the computer’s name with the shared optical drive. You can open it from there and install the software that way. 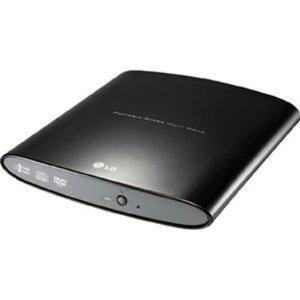 The key is finding a drive that is compatible with OS X and plugging it into the MacBook Air via a USB port. You can always get Apple’s MacBook Air SuperDrive. It costs $79 and only works on a Mac. Another option is to get a more generic drive that can be used on both a Windows and Mac.

When shopping just make sure it works with both Windows and Mac. One option is the LG Portable Super Multi Drive with model number GP08NU6B. We can confirm that it does work with the MacBook Air and it costs just $44.65 on Amazon, a savings of about $35 off the SuperDrive. It may not be the fastest or best drive. But since it is unlikely you will be using this drive a lot, something inexpensive like this will work fine. It connects via single USB port and gets its power via the same cable it connects with. It comes with a cable that has both a data USB connection and another USB connector for just power. But the second USB connection is not needed, which is good since the USB ports are on opposite sides of the MacBook Air and the cable will not reach to plug in both connectors.

Make a Disc Image On Another Mac

If you don’t want to share over a network and don’t want to pay for an external drive, one solution could be to just make an image of the optical disc you wish to access on the MacBook Air. The following summarizes the steps from Wikihow.

On another another Mac with an optical drive, first make a new folder somewhere to store your files from the disc and then copy the files into that folder. Now right click on the folder and choose Get Info. Take note of the total size of tall the contents in the folder. You will need this info in the next step. 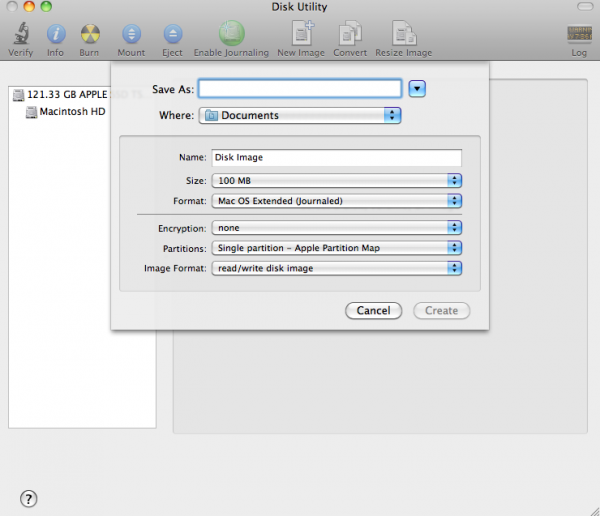 Now open the Disk Utility. It is in the Utilities folder of the Applications folder, or open spotlight and start typing the name till it appears. Click on New Image to make a new image. Enter the name and size from the previous step. Add a little extra room. For example if the files total 356MB, then choose something like 400MB. Set encryption to None and Format to “read/write disk image” or “DVD/CD Master”.

A newly mounted disc will appear on the desktop. Just drag the files into that image. Now you can drag that image onto a USB flash drive and use it to install the software on the MacBook Air.

Look for a Downloadable Version

Obviously, this is the simplest solution if you have Internet access and can find the software. Many applications that can be purchased on CD can also be downloaded. For example, we installed Photoshop Elements using the downloaded version from Adobe. After a few days of use we felt like it was a good solution for image editing and purchased a copy during the recent Black Friday deals. Staples had it for much less than Adobe did. So we bought the boxed disc and just used the serial number to activate the trial version downloaded from Adobe.

Look at the web site for the company that makes the software you wish to install and see if this is possible. One problem you might face is some companies don’t use serial numbers. They have two separate downloads – one as a trial version and one is a full version that can only be accessed after paying the company. If you have already purchased the disc see if you can take it back and buy it directly instead. Most stores will accept returns of software if it has not been opened at all. If the box has been opened you are stuck. Buying directly can sometimes cost more, but could be worth a few more dollars for the convenience of having a download to deal with.