Dropbox, the incredibly useful and easy to use file syncing and cloud backup service, has finally hit the 1.0 mark in release candidate form, but with issues for Mac and Linux users.

Dropbox’s new 1.0 version is a release candidate, meaning it is nearly ready for full release but the developers want to test any last minute bugs before sending it out as a full release — and for good cause since a bug has been discovered.

Dropbox 0.7.110 was the previous stable release number. Most users will have that version running on their systems. However, there is an issue for Mac and Linux users running that version and upgrading to the new 1.0RC version. There seems to be a file permissions issue as per the DropBox 1.0RC release notes. For some users an error message will pop up during the update.

Here is what their web site says:

“There have been reports of issues when upgrading from 0.7.110 to 1.0.0 on OSX. If after you upgrade you get a permissions error box or the menu doesn’t show, kill the dropbox process if it’s running. You then have two choices. Install 0.7.110 and wait for the next release candidate (recommended), or delete all the files in ~/.dropbox and go through the installation wizard again, (Make sure to point Dropbox at your current Dropbox location and that it asks you to merge) Thanks so much for running our Release Candidate!”

The best new feature of this release is the ability to selectively sync folders. The benefit of this is users on computers with smaller hard drives and large collections of files will not have to sync every file to every PC linked to their Dropbox account. For example, computers like the MacBook Air with limited amounts of storage can be configured only the most important files while others are stored on the Dropbox cloud storage site and other machines with larger drives. 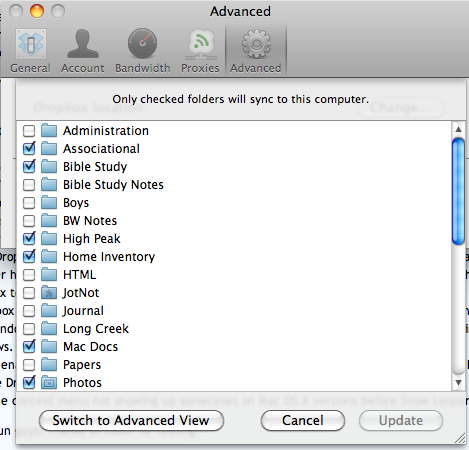 Remember to keep copies of your files in at least two locations – one on the Dropbox server and one copy locally. A strategy might include fully syncing between the Dropbox cloud storage and a desktop system with plenty of space but only selectively syncing with a laptop or another computer where not all the files are needed.

With selective sync, the files are accessible online and can be added to your synced library of files any time you wish. But the files don’t have to be on every computer most of the time saving space and time since less is downloaded.

As with all release candidate software, there may be issues so be careful using this on a system or with files that are of utmost importance, like work or school documents and files.

The best way to update to this new version for those who wish to only selectively sync might be to unlink the computer with Dropbox in the preferences. Then uninstall the application and delete the Dropbox folder. After that, install the update available on their blog. After installing it the setup wizard will give the option to choose to sync all the files or selectively sync. Choose the latter and then uncheck the boxes of folders not needed on the system.