Switching to OS X from Window: the Fun and Frustrations

The first time I saw Microsoft Windows was in the days of version 2 when it was not much more than a file manager with a few little applications like a calculator and Write. That’s a little exaggerated, but not much. The point is I’ve been a hard-core Windows guy for more than 17 years.

Switching to a Mac running Mac OS X Snow Leopard has been a bit of a shock to my system. Suddenly everything I’ve taken for granted, like hitting the Window key and typing “Wor” (without quotes) to get to Microsoft Word or clicking one button to fill the screen with my window, are gone. It feels like walking in the wind without your pants.

The new MacBook Air was enough to entice me on this cruise through the streets of Cupertino (hometown of Apple). And while I’mloving the hardware and even like the OS and a few of the programs I’ve been using, I feel awkward. It is usually the littlethings like, selecting the word uncomfortable and copying it to paste it into the Dictionary app in order to find a better synonym in the Thesaurus feature.

Yes, I initially typed “I feel uncomfortable” but that word didn’t say it. I tried to do a CONTROL+SHIFT+Left Arrow which in Windows selects the previous word for you. Then choose CONTROL+C and it is copied. Click the Dictionary application and Control+V pastes it.

Not on a Mac. No, CONTROL+SHIFT+LEFT ARROW selects the whole line. CONTROL+C doesn’t seem to do anything, nor does CONTROL+V. And where are my END, HOME, PG UP and PG DOWN buttons? 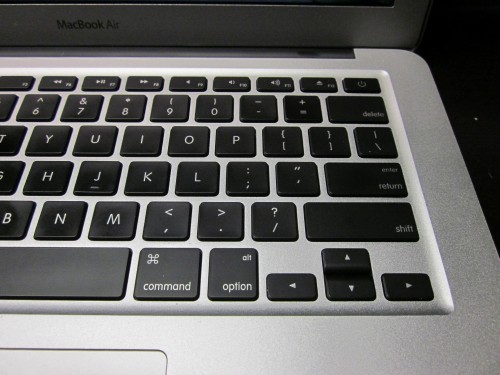 But there is help. For a list of Mac OS X keyboard shortcuts, I went over to Apple and found them. I learned that CONTROL+C indeed does nothing unless some application wants it to. But it is not a system-wide shortcut. COMMAND+C copies and COMMAND+V pastes. In fact most Windows functions done with the CONTROL button are replaced by the COMMAND button. And CONTROL+V sometimes is a page down command. But not always – as in Chrome where it does nothing. To go to the end of the line use COMMAND+RIGHT ARROW and to the beginning use the LEFT ARROW instead.

Just as frustrating as some things are in OS X, like typing, others are a joy. Uninstalling software by just sending its icon to the trash from the Applications folder is much easier than uninstalling Windows applications. Also, I now see why Windows 7 has been called very Mac-like. The Dock and it’s icons are much more useful than the Task Bar icons in older versions of Windows. Windows 7 has nearly caught up. Finally, I have found that things like adding printers and other hardware is far simpler in OS X.

One site that has been a big help in this process has been MacVsWindows.com. It is a Wiki site with user edited articles comparing the two operating systems. I learned a lot from reading some of them. For example, I learned that on the Mac that frustrating little green button with the plus sign doesn’t maximize a window to cover the whole screen. Why? And why isn’t there a way to do that with a single click built into the OS? 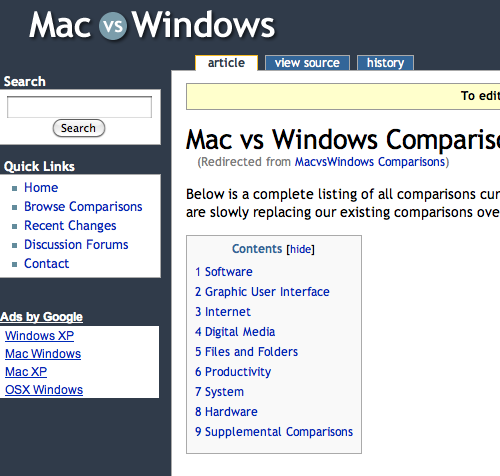 The site is a work in progress but it taught me some things. If you are switching, check it out. Also, I’ve been helped greatly by some of the videos on Lynda.com. This is a video training site that only costs $25/month to use. I’ve gained a lot of help in the short time I’ve been using it to learn about OS X.

So, after a few days I’m getting the hang of Mac OS X Snow Leopard. So much so that I find myself wanting to double tap my Windows notebook trackpad for a right-click. But I still keep looking for the End/Home keys on the MacBook.

I’ll get there! If you have any suggested web sites for switchers, leave a comment below or send me a message on Twitter @kapurcell.