Switching from iPhone to Android 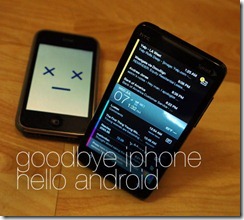 Believe it or not, not everyone thinks the iPhone is the greatest invention in modern human history. There are actually people switching from the iPhone to the Android operating system for lots of reasons.

Where they live AT&T is too unreliable. The recent problems with the iPhone 4 and Apple’s response may have them disillusioned with the cult of Apple. Or maybe they really like the iPhone but just think Android is better more open, better GPS navigation, or they are heavily into Google’s cloud tools.

If you are considering a switch, there are some things you will want to keep in mind about the process, and about life after the switch to Android.

Lifehacker has a great article for switchers. It covers some of the differences and strategies for dealing with the Android life, post iPhone.

The author starts with a warning:

Let me preface all of this by saying that for manyâ€”not allâ€”the switch from iPhone to Android will feel like being covered in band-aids and ripping each one off over the course of a few weeks. This is not because there’s anything particularly wrong with either mobile operating system, but because they have different paradigms.

If you give the article a look you will find a list of the good things Android does better, like Google Maps v. iPhone’s Maps app. Also voice control on Android is better than iPhone’s Voice Control. And finally there is the whole freedom to install apps as you please instead of only the ones Apple approves. That also is a problem since it opens the door for spyware. In some cases Android phones have poor battery life, the post specifically calls out the new big-screened HTC Evo running on Sprint.

It is a good guide and worth your reading if you have or are considering the switch. I almost jumped ship recently, but after reading this I am both glad and sad that I didn’t.

If you want the best of both worlds you can hack your old iPhone and run both like the person in the video below: