Smirk About Skins for iPad and Kindle Review

Smirk About skins are decorative skins made for a large selection of portable electronics including everything from the new Apple iPad to Sony Playstation 3 Controllers.   We were fortunate enough to receive a couple of samples from the folks at Smirkabout.com to review.

I selected a couple of skins, one for my iPad and the other for my Amazon Kindle 2. These are similar to the Gelaskin skins Josh Smith previously reviewed.

Finding the right skin is as simple as choosing your portable device and then selecting from a plethora of designs. They have designs by artists, simple patterns, and pop culture choices.

Below is my video review of both the iPad and Kindle skins.

To summarize what I said in the video, the skins are fairly easy to apply and feel like they would do a good job of protecting the back and front surfaces that they cover from scratches. The  Smirk web site has a large selection of skins. Be careful what you pick though. I thought I would like both of the designs I selected, but the one for my iPad was a little wild for my taste.

The Smirk About skins are a great way to add some personality to the generic look of the iPad, Kindle or whatever device you use. They are easy to apply and stick very well. I eventually removed the skin and it did not leave any adhesive residue on the case of either device.

It was difficult to get the skin on my Kindle to lay down around the the power switch and headphone jack. That part of the top edge is raised slightly. That skin left a little game along the uneven section.  The rounded back of the iPad made it a little harder to apply the back skin. There were a few wrinkles that I had to work out a little. But it was not hard to do so on the iPad. I never got it flattened all the way on the Kindle.

The skins do not add any weight or thickness to the device. I was able to put my Belkin Grip Vue Case on the iPad over the skin. 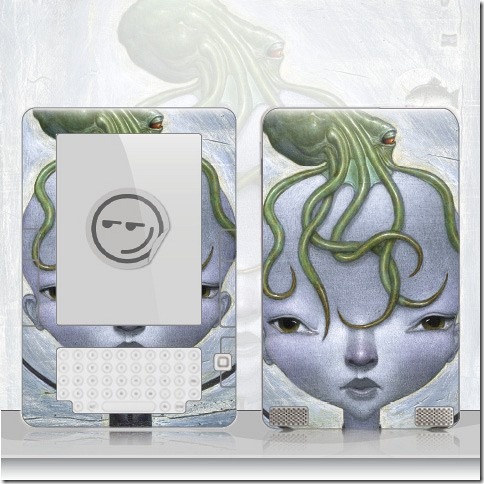 The Smirk About skin I applied to my iPad is called the Phapk. It costs $29.95 and has a lifetime guarantee which says that if it outlasts your device then they will replace the skin for free. They also guarantee that the colors on the skin won’t fade. The one applied to my Kindle is called Mystic Ocean and was a lot more attractive. It cost $19.95 and has the same guarantee. 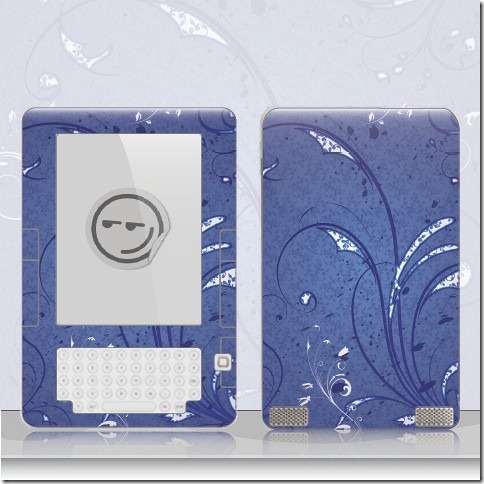 I asked my family about the skin on the Kindle. Since getting my iPad I almost never use it any more, so I let them decide whether they liked it or not. My sons were split. One  really liked it and the other was not as impressed. But my wife said it was too busy and she preferred the white of the Kindle. So we  removed that one.

If you like customizing your devices with skins, then I personally think you will really like the skins from Smirk About. They are not too expensive and will protect the surfaces most likely to be damaged by scratches making them worth more if you try to resell them later.