How Android Fragmentation Hurts Regular Users — And Android as a Whole

Four Android users walk into a bar. No this isn’t another installment of AngelGate, but a look at the problems that come from having Android devices running on very different software that quickly became apparent when I sat down with 3 other Android users, who aren’t geeks, in a bar last week.

That’s what happened last night while out with a group of friends. Two members of the group had all recently, within the last few weeks, purchased new phones from Verizon (The Samsung Fascinate and the LG Ally) while another user and myself had the original Droid. After a few minutes it became apparent that the software differences that don’t seem major when reading about them on the web become a major difference in real life, especially when you compare Android devices.

For a clear look at what we are talking about read more about Android version fragmentation from Ars Technica and visit Engadget for Google’s take on Android Fragmentation. 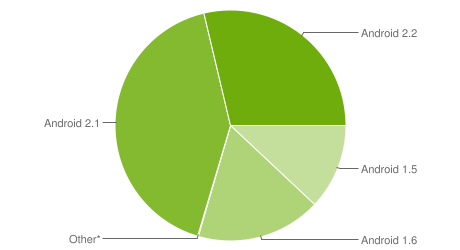 The first spot where we ran into trouble was when the Fascinate user wanted to know how to arrange contacts by last name instead of first name, so a Droid user walked him through the steps to do so; only to find out that the option wasn’t there. The same option was missing on the LG Ally. We also turned to apps where it was also apparent that the users with the newest phones couldn’t get access to the latest version of Gmail since they didn’t have Android 2.2. All of this adds up to creating different user experiences that don’t make sense to the end user.

When I asked the friend to check the version of Android running on his phone he replied, “My phone just came out, It should have the newest software.” And that’s what most consumers think, and for most technology purchases, that’s what users can expect.

While we were talking about apps another interesting item came up. While many power users crave five or more screens to hold our apps, two of the new Android owners wanted to cut down to just three. Sure this is an anecdotal experience, but it matches up well with the average number of 25 Apps on Android phones. This has nothing to do with fragmentation, but is a good reminder of how users needs and wants may be different but their expectation of having the newest is the same.

Sure, almost every Android phone can be rooted and upgraded to the latest and greatest software with a ROM from Cyanogen or many other talented individuals who basically create a new user experience. No, it’s not a the shady world it once was, and is easy to install a new ROM with an app like ClockWorkMod, but that’s not the best path for regular users. First off it could leave you stranded on an old version of Android and almost brick your phone and second most regular users don’t want to have to go through that to have a phone that allows them to sort contacts by last name (a new feature in Android 2.2).

Right now Android has a pretty good thing going. Yes, there are issues with fragmentation that are contributing to a fragmented and hard to navigate consumer landscape, but consumers are also flocking to Android powered phones with tk million new activations a day. The problem hits when consumers start comparing their brand new phone to a phone that is a year old and finding out the new device has older software. Handset developers don’t need to support and upgrade old devices forever, but they should be working hard to launch Android phones with the most recent software, even if it is announced publicly, just a few weeks before.

When a new iPhone, Xbox or notebook is released you don’t see it running older software than the version from a year ago, so why should your Android phone. As a user who enjoys the Android platform I sincerely hope that Google, the carriers and manufacturers can come together to fix this real problem facing the Android brand.